The Unitarian Universalist church that I attend has monthly guest speakers, and this past Sunday’s speaker was an imam from a mosque in the Bronx. It was pure coincidence that he was slated to speak just after the atrocity in New Zealand, but I admit I felt a morbid curiosity to see how he would address it. Would he be angry, would he be grieving?

As it happened, the imam’s sermon was on the importance of diversity. Whether this was the speech he had planned to give all along, I don’t know. It would have worked equally well just because it was a black Muslim delivering it to a mostly-white congregation on Long Island, but it had a special resonance in light of this past week. He was calm but impassionate, not angry that I could see, but I could tell that he considered it a message that needed to be delivered now more than ever.

He talked about the verse in the Qur’an which says that Allah has divided humankind into nations and tribes “so that you might come to know one another”, which he argued was a divine endorsement of diversity and an appeal for understanding and tolerance of those whose ways are different.

He also told the story of how Iblis, Islam’s equivalent of Satan, was cast out of Paradise for refusing to bow down to the newly-created Adam. Iblis regarded himself as superior because he was created from fire, whereas humans were created from earth. Although I don’t treat the supernatural elements of this story as literal truth, it works as a parable about those who find some flimsy reason to consider themselves inherently superior to others, and the evil which that belief begets.

That evil reared its head last week in the worst mass shooting in New Zealand’s history, where a white supremacist fascist opened fire on two mosques in the city of Christchurch, killing at least 50 people. Most horrible of all, the killer livestreamed the massacre on Facebook so that others of his ilk could cheer it on. This speaks volumes about how social media sites deserve a share of the blame for nourishing extremist ideologies. It’s bad enough that they foster ideological bubbles and promote self-radicalization, but they’ve also furnished a stage to turn bloodshed into a deranged spectator sport.

I admit, some part of me thought this kind of mayhem was solely a disease of the U.S., that civilized countries were free from it. Clearly, that was a foolish belief – although New Zealand, unlike the U.S., is poised to join the many other countries that acted sensibly in response to gun rampages. Its progressive prime minister Jacinda Ardern is proposing a ban on semiautomatic weapons, and I don’t doubt it will pass.

I’ve written a lot about my disagreements with Islam (which are, I shouldn’t have to add, no different in kind from my disagreements with other faiths). However, I hope I’ve always been clear that whatever philosophical or theological differences we have with each other, those conversations have to be built on a bedrock of mutual respect for human rights. When we criticize religion, it should always be centered on protecting the vulnerable and ending suffering and injustice – not on finding an excuse to proclaim our tribe’s superiority or a justification to banish the other from our sight.

That’s a balance the atheist community hasn’t always gotten right, and that alone ought to give us a reason for self-reflection. As I’ve said before, Muslims are human beings who deserve the same rights as everyone else. Anyone who’s willing to abide by the laws of a secular society should have the freedom to live wherever they choose and practice their own faith as their conscience directs them.

It’s times like these that we need to stand in solidarity with them and make it clear that we don’t condone bigotry of any kind. If that means we need to offer our support and protection even to those we have sharp disagreements with about theology, so be it. If anyone ever thinks that anything I’ve written justifies prejudice against Muslims, let alone terroristic violence, they haven’t listened to a word I’ve said.

This should also be proof, for anyone who didn’t already know it, that the white supremacist far-right needs to be treated as at least as great a threat to humanity as Islamist terrorism. All these extremists are alike, equally violent and dangerous, equally willing to slaughter innocent people in the name of a hateful ideology – whether it’s Muslims, or Jews, or women, or any other maligned group. Anyone can become a target for the rage of mediocre men who’d rather go out in violence than give up a scintilla of unearned privilege. No one is safe.

But it’s not likely this lesson is going to be widely accepted. Many of those same mediocre and angry men are the ones in power right now, both in the U.S. and elsewhere. Not only do they have no intent of cracking down on right-wing bigots, they actively court them and depend on them for support. It would be comforting to believe that this sickness was confined to a vanishingly tiny percentage of humanity, but the reality is that huge numbers of people are sympathetic to genocidal ideology, even if only a handful are willing to go so far as committing murder because of it. 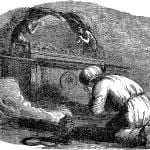 March 22, 2019 The Fountainhead: Holy of Holies
Recent Comments
0 | Leave a Comment
Browse Our Archives
get the latest from
Daylight Atheism
Sign up for our newsletter
POPULAR AT PATHEOS Nonreligious
1