Last Friday, I attended one of the hundreds of Lights for Liberty candlelight vigils that took place across the United States and in many other countries, protesting the inhumane treatment of children, families and refugees at the border and in American concentration camps. Here’s a report from the vigil in Garden City, New York.

The gathering took place at the Unitarian Universalist Congregation of Central Nassau, a church whose grounds face an intersection of two major roads. There were speakers from the community, from the clergy, from immigrant rights and activist groups, and local politicians. Around 300 people showed up, and as it grew dark, they lined the roads with lit candles and unfurled banners. 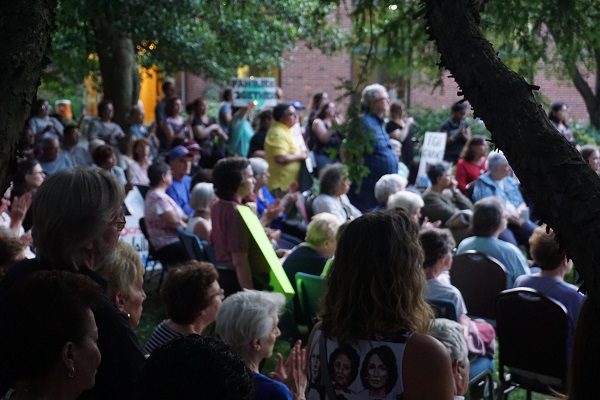 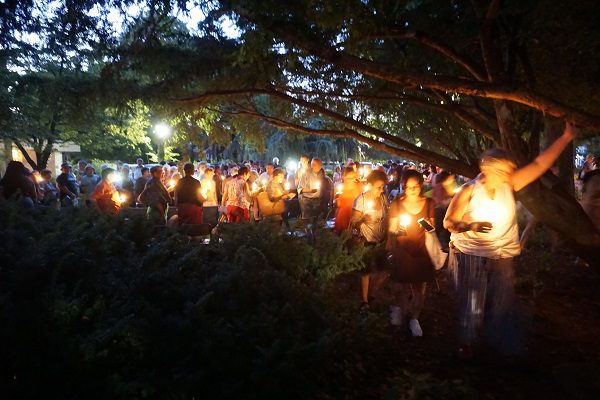 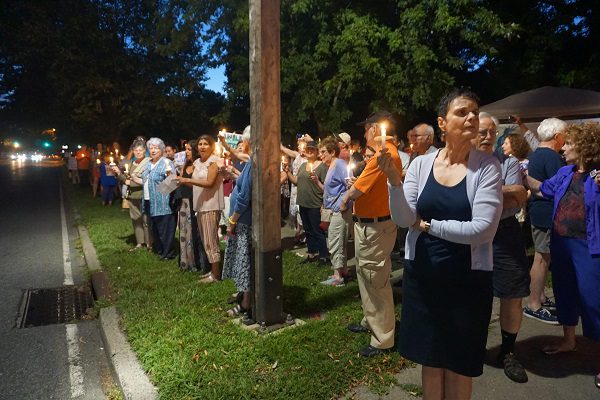 Although Garden City is a rich, white, conservative neighborhood, the response was more enthusiastic than I had expected. Dozens of cars honked or cheered in support as they drove by. There were a handful of drive-by hecklers, but none of them were brave enough to run their mouths until later in the evening, when it had grown dark and the crowd had thinned.

I can’t deny, it felt good to be there, among people of conscience who are equally horrified by what this country is doing in our names. But we can’t forget that there are many Americans who loudly approve of this cruelty (and not just Reichsführer Pence). Christian conservatives are dropping the mask, as Libby Anne points out in a post about James Dobson’s tour of a border facility.

Dobson starts out by describing the situation as “a human tragedy” and the people he saw there as “poor and destitute human beings”, “exhausted and ragged from walking hundreds of miles”. He even spoke about “traumatized and frightened” children whose plight brought tears to his eyes.

But just when you think he’s about to speak out against their treatment – just when you think the founder of Focus on the Family might, for once in his miserable existence, live up to the implication of that name – he makes a hard right turn into white supremacy:

I have wondered, with you, why the authorities don’t just deny these refugees access to this nation… The situation I have described is the reason President Donald Trump’s border wall is so urgently needed.

…I can only report that without an overhaul of the law and the allocation of resources, millions of illegal immigrants will continue flooding to this great land from around the world. Many of them have no marketable skills. They are illiterate and unhealthy. Some are violent criminals. Their numbers will soon overwhelm the culture as we have known it, and it could bankrupt the nation.

Dobson’s fretting that immigrants will “overwhelm the culture as we have known it” is barely a dog-whistle at all. After all, many of these Latin American refugees are Christian – often more fervently Christian than Americans! There’s no way to read this other than as a call to keep out non-white people, lest they upset the established social order where rich conservative white men are automatically on top.

It’s an echo of every racist and nativist politician in American history who demonized immigrants as ignorant, diseased and violent and urged us to bar the door against them. The rhetoric never changes, only the ethnic identity of the enemy du jour. (Ironically, the reason Dobson says this is so important is because these immigrants, if allowed to become citizens, will vote Democrat. Has he ever devoted even a moment of self-reflection to figuring out why that might be?)

There is nothing redeemable about Dobson’s version of Christianity. Nothing at all. It has putrified beyond what I once thought possible. There is no morality left here. None. It is rotten to its core. Maybe it always was.

We saw some of this mindset right here, in the comments on my earlier post, in the person of a commenter named Joe Stocks. He started out by arguing that the poor conditions under which refugees were being held was the result of bureaucratic ineptitude, not malice:

Being an employee of the federal government for over three years and interacting with it almost daily I can safely conclude the US federal government is one of the most inept and incompetent bureaucracies that exists in the world.

So, it is quite puzzling to me when I hear the outrage about how poorly run and maintained these facilities are because that’s pretty much the norm. I remember being on training missions and we didn’t have food or water. This wasn’t a nefarious plot to starve us but simply gross incompetence. (source)

But when I asked him why the Trump administration had gone to court to argue against providing basic necessities of hygiene to detainees – showing that this neglect is willful, not accidental – he showed his true colors by offering an affirmative defense of withholding soap, toothbrushes and beds from imprisoned children:

The facilities are packed and the CPB is required to provide a every soul with gift bag? This is very comical. If the worst that is going to happen to people that are voluntarily coming here knowing the facilities are packed is they can’t brush their teeth and they smell a little ripe and they sleep on the ground (I did it many times) then this is the best concentration camp there is. (source)

People like this are proof that if real, goose-stepping fascism comes to this country – and that may not be as unimaginable as we once thought – it won’t lack for supporters. Nazi-style extermination camps didn’t spring into existence overnight. They were the end result of a slow ratcheting up of persecution. Each step was a little worse than the last, and each step was loudly supported by a segment of the population who came up with excuse after excuse to justify it. As in Joe Stocks’ case, when one excuse fails, they just switch to another.

This article from Slate describes the necessities he cavalierly dismissed:

The littlest kids there, the infants and toddlers, don’t know the words for soap or toothpaste yet. They don’t miss the items in themselves, only the feelings of adult contact and loving physical care with which they associate these substances. To be kept clean and warm and well-fed, to smell nice as you fall asleep, to have a toothbrush and a blanket and a soccer ball, above all, to have someone who cares that you have these things: This is in some primal way to belong in the world. No one disputes this. We only debate which children deserve to have that comfort and safety. The kids at the border, the lawyers and cops and politicians and even some regular people say, don’t qualify for the luxury of clean mouths and bodies or warm blankets or soft beds.

The only way to argue against this is to cauterize your own conscience. The Christian conservatives who cheer for the suffering of refugees have cut off a vital part of their humanity, like amputating a healthy limb. They’ve done this to preserve an unjust social order that benefits them, and they consider deafening themselves to the cries of children an acceptable price to pay if it allows them to keep their grasp on power a little while longer.