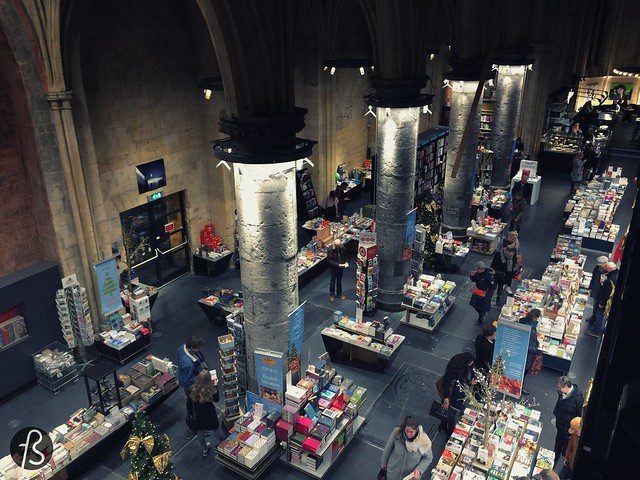 The coming secular era is a trend I’ve tried to stay on top of. In April, I wrote about nonbelievers surging into the number-one spot as the largest “religious” demographic in the U.S., in a statistical dead heat with evangelicals and Catholics.

My co-author Jim Haught calls the rise of atheism and secularism the biggest news of the 21st century. You can debate whether there are other stories that count as “bigger,” but it’s hard to deny that this is a striking development. It’s a sharp break with hundreds of years of human history, and what’s more, it’s happening on a very rapid timescale.

As always, we begin in Europe, with this striking headline: One-Fifth Of All Dutch Churches Are Now Secular Buildings [note: autoplay video at link].

In 2017, religiously unaffiliated people became the majority in the Netherlands, according to government data. With space at a premium and a population that’s less and less interested in using them for worship, dozens of historic old church buildings are finding a new life as skating rinks, bookstores, gyms or other secular structures:

About 25% of Dutch churches built between 1800 and 1970 are now being used for nonreligious purposes, including as apartment complexes, offices and cultural centers, according to an investigation published by the Trouw in June. Around 20% of Dutch churches built before 1800 have also been redesigned, most often finding new life as community centers, museums or theaters.

(I really want to visit the Selexyz Dominicanen.)

The Catholic church is feeling the pinch in its former European strongholds. In France, more and more ex-Catholics are asking to be “de-baptized” and removed from church membership rolls. And in Spain, the number of nonbelievers is rising steadily, from less than 10% in the 1980s to over 25% today. Among younger generations, it’s even higher:

The data, compiled predominantly from the National Statistics Institute (INE) and the barometer from the Center for Sociological Research, does not spell good news for the future of the Church. As many as 48.9% of young people between the ages of 18 and 24 have turned their back on religion, while just 48.5% confess to having a belief system.

One of the most notable signs of secularization is the surge in civil marriages and the corresponding plummet in church marriages:

The Ferrer i Guàrdia Foundation’s report reveals that, in Spain last year, 80.2% of marriages were civil compared to 19.8%, which were religious. This contrasts sharply with 1992 when 20.6% of couples chose to have civil ceremony and 79.4% to be married in a church.

When I visited the U.K. a few years ago, I noted the number of old churches converted to bars and restaurants. And the trend is still gathering momentum, according to the latest British Social Attitudes survey:

In just a decade the number proclaiming no faith has risen from 43% to 52%, as “secularisation continues unabated”… a quarter of the public now boldly state “I do not believe in God”, compared with just 10% 20 years ago.

…Encouragingly, the decline in faith is matched by a growing tolerance of other people’s beliefs – which has surely never been more important. Yet almost two-thirds (63%) agree that “looking around the world, religions bring more conflict than peace”.

Here’s the money shot – a statistic that amazed even me:

Reading the runes, the established church can see its future looks grim with only 1% of 18- to 24-year-olds saying they belong to the Church of England.

My Patheos colleague Rick Snedeker at Godzooks has more facts to report. As in Spain, it’s not just that more people are unaffiliated, but interest in traditional religious services is falling precipitously:

The survey indicated that nearly two-thirds (64 percent) of Brits aged 18-24 are unaffiliated with any religion, compared to 28 percent of people aged 65 and older. Fifty-six percent of people who currently belong to a religion or who were raised in a faith tradition never attend church services or meetings; only 14 percent attend weekly religious gatherings.

Even the developing world, often seen as religiously monolithic, is feeling the stirrings of secularism. Phil Zuckerman reports:

According to a new study recently released by the Arab Barometer Research Network and the BBC — a large, in-depth study covering 10 countries (plus the Palestinian territories) and involving responses from over 25,000 people — secularism is on the rise throughout the Middle East and North Africa.

As Zuckerman notes, these numbers are all the more remarkable because many of these countries still have rigid blasphemy laws and brutal punishments for atheism and apostasy. If surveys can find this many people willing to call themselves nonreligious, there must be many more who are only kept in the ranks by cultural and legal pressure. If that coercion were to be removed, who knows what might blossom in the Arab world?

Last but not least, Latin America, another one-time stronghold of Catholicism, is evolving as well. The evidence of secularization is so strong that even the Catholic Herald (which is still defending a convicted child molester) can’t spin it away:

A new survey by the respected Chilean polling firm Latinobarómetro finds Latin America now to be only 59 per cent Catholic, down from 80 per cent in 1995.

…Until the past decade or so the primary beneficiary of Catholic loss was Pentecostalism… [but] the most significant new development on the Latin American religious landscape is the meteoric rise of the “religious nones”: those who don’t have any specific religious affiliation or identity. The 2014 Pew survey reported a Latin American population of 8 per cent nones. In just three years that figure has more than doubled to 17 per cent, according to Latinobarómetro.

In this light, the election of Pope Francis seems less like a recognition of Latin America’s importance to the church and more like an attempt to stem the bleeding. But it doesn’t appear to have worked. If anything, his clumsy defense of a notorious accused bishop may have made matters worse.

I haven’t seen much religious reaction to these stats. The apologists seem confused, and well they might be. There’s no single cause driving this, but a variety of factors: better education, superior secular alternatives to services that churches used to provide, anger at religious acceptance of bigotry and immorality. In short, the world is moving beyond religion, and that’s a change for atheists to celebrate.

August 12, 2019
The Internet Gives Doubters a Home
Next Post