A reminder: Commonwealth is coming! Click here for more details.

The climactic scene of The Fountainhead comes after Howard Roark designs the Cortlandt housing project under Peter Keating’s name, only to find that a gang of collectivist flunkies have desecrated his perfect design. In the book, Ayn Rand describes the altered Cortlandt as a mutilated horror show, inspiring disgust and revulsion in all who behold it. Here’s how the movie depicts it. Brace yourself! 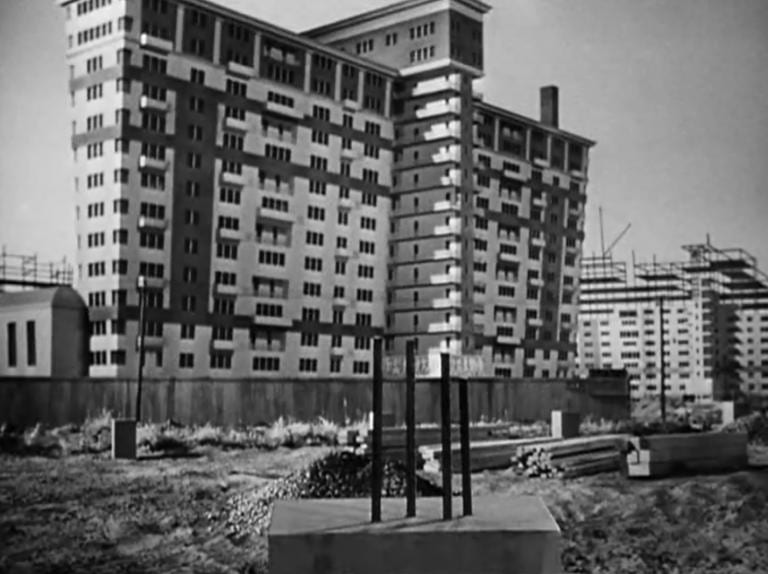 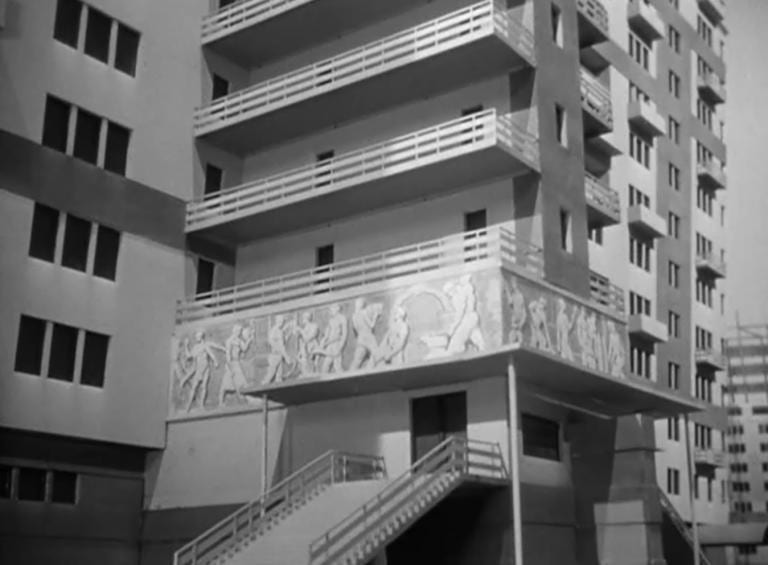 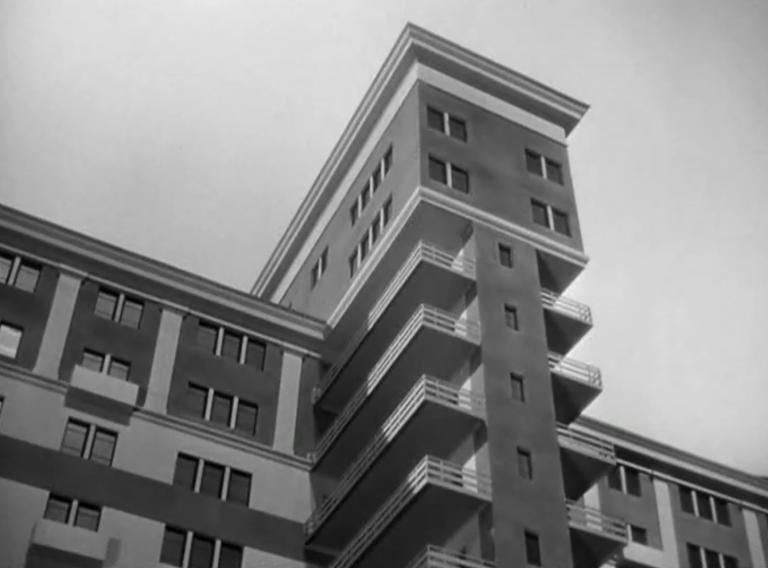 If you don’t see what the big deal is, you’re not alone. This movie has a version of the same problem that the Atlas Shrugged movies would later suffer from in regard to their casting: Ayn Rand tells us that some people and some things are Objectively Good and others are Objectively Bad, and that the difference is obvious at a glimpse. But no film that has to show real people and real buildings could convey this. Actual reality can never live up to Rand’s violently emotive language.

Peter Keating tries to sue over the unapproved changes, only to find it’s impossible. In the book, a bunch of bureaucrats sneer at him, “All right, go ahead, try to sue the government.” This fits with Rand’s worldview that government is always and everywhere a force of unaccountable evil. But censorship in old-school Hollywood didn’t permit this unpatriotic implication, so instead we just get a vague line where the bad guys tell him, with no further explanation, “You’ll find that you can’t sue us.”

With no other options, Howard Roark schemes to blow up the building, recruiting Dominique to lure the night watchman away from the site. As in the book, Roark arranges the plan with no concern for her safety, and Dominique narrowly avoids being hit by flying debris from the explosion. To make herself seem convincingly injured, she slashes her own arm with a piece of broken glass and almost bleeds to death. Be aware that this scene may be disturbing, even with 1940s special effects:

As always, the censors came down hard on any allusion to sex, but they apparently had no concern about graphic violence.

Ironically, Roark and Dominique’s relationship ended up being a template for the actors who played it. Gary Cooper, who played Howard Roark, had several extramarital affairs with actresses he met on the sets of his various movies. One of them was Patricia Neal, who played Dominique:

In 1948, after finishing work on The Fountainhead, Cooper began an affair with actress Patricia Neal, his co-star. At first they kept their affair discreet, but eventually it became an open secret in Hollywood, and Cooper’s wife confronted him with the rumors, which he admitted were true.

It’s almost too perfect, in light of Rand’s insistence that the two most Objectivist people in a room are philosophically obligated to have sex, regardless of preexisting relationships either of them may be in. Given that the two of them were chosen by Rand herself as embodying the Objectivist archetype, it’s a weird instance of life imitating art.

Their relationship fits the Objectivist template in yet another unfortunate way. Just like how Roark treats Dominique, it was violent and emotionally abusive:

A possessive lover, in Neal’s telling, he once hit her when he found her dating Kirk Douglas. When Neal became pregnant by Cooper in 1950, she had an agonizing back-room abortion while Cooper, anxious and soaked with sweat, waited in his car. “I’ve wept and wept over that,” she says.

…After two years, Cooper’s wife learned of the romance and told their 12-year-old daughter, Maria. The affair continued for two more years, and though Gary and his wife separated, he would not commit himself to marry Neal. “Why go on?” Patricia kept asking herself, and finally told Gary it was over. She then suffered what she now says must have been a nervous breakdown. “Oh, how I loved him. I was in another world when it ended,” she says. “I couldn’t talk. I lost 25 pounds. I felt life was over, but I didn’t have the courage to kill myself.” (source)

Ayn Rand herself wasn’t immune to this tendency to turn into a real-life embodiment of the ideas in her books. Another example would be the cult of personality that she created around herself in later years, infamously proclaiming that she no longer wanted to hear disagreement or dissent, but only “intelligent agreement“. She expelled countless people from her inner circle over minor slights and disagreements, winding up a miserable and lonely figure by the time she died.

Apparently, she missed the moral of her own book. As Dominique said to Peter in an earlier chapter:

“You wanted a mirror. People want nothing but mirrors around them. To reflect them while they’re reflecting too. You know, like the senseless infinity you get from two mirrors facing each other across a narrow passage. Usually in the more vulgar kind of hotels. Reflections of reflections and echoes of echoes. No beginning and no end. No center and no purpose.”

Rand believed that wanting to imitate others and to be imitated was a proof of inner emptiness. And yet in her real life, she surrounded herself with sycophants from whom she demanded exactly that. It seems that even the grand doyenne of individualism turned out not to be as self-reliant as her protagonists. She, too, craved a supportive community and the validation of her fellow human beings.

August 17, 2019 Friday Night Music: Liberty Song
Recent Comments
0 | Leave a Comment
Browse Our Archives
get the latest from
Daylight Atheism
Sign up for our newsletter
POPULAR AT PATHEOS Nonreligious
1