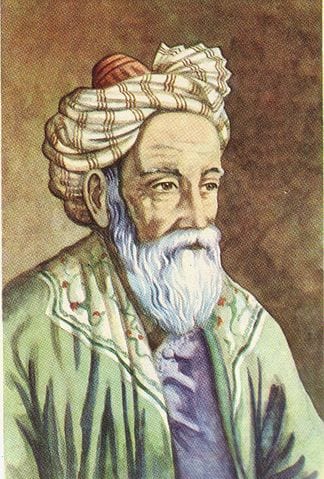 This is the first segment of a series on renowned skeptics throughout history. These profiles are drawn from 2000 Years of Disbelief: Famous People With the Courage to Doubt, Prometheus Books, 1996.

Today, in much of the Muslim world, a writer who casts doubt on heaven and holy men is likely to be jailed or targeted by a religious death decree.

Yet nine hundred years ago, a brilliant Persian scientist dared to voice eloquent agnosticism in the most famous poem ever to come from an Islamic land. The Rubaiyat of Omar Khayyam scoffs at theologians, laments the unknowability of the hereafter, and hails worldly pleasure as the only tangible goal.

“Here with a loaf of bread beneath the bough / A flask of wine, a book of verse – and thou / Beside me singing in the wilderness / And wilderness is Paradise enow.”

The poet advised seekers to stop pondering contradictory religious dogmas, and escape with a flagon of wine – “The grape that can with logic absolute / The two-and-seventy jarring sects confute.”

Abu’l-Fath Omar ibn Ibrahim was called Khayyam (tentmaker), perhaps because his ancestors had practiced that trade. Omar was educated in science and philosophy in his native Nishapur, then went to Samarkand where he wrote a treatise on algebra. Sultan Malik Shah commissioned him to help build an observatory in Isfahan and make astronomical observations to reform the calendar. After the death of his patron in 1092, Omar returned to Nishapur as a teacher and served the ruling court through his knowledge of mathematics, medicine, history, law, philosophy, and other subjects.

Omar wrote quatrains expressing his wistful musings on the meaninglessness of life. After his death in 1131, copies were made, and evidently embellished with improvisations by other poets. For centuries, the old manuscripts were forgotten until chance turned them into a literary sensation.

In 1856, a librarian at Oxford University sent an aged Persian manuscript to a talented English poet, Edward FitzGerald, who was studying Persian. The skeptical-minded FitzGerald was captivated by the existential tone of the verses, which reminded him of the ponderings of Epicurus. FitzGerald wrote to Alfred, Lord Tennyson, who had been his classmate at Cambridge:

“I have… got hold of an old Epicurean so desperately impious in his recommendations to live only for today that the good Mahometans have scarcely dared to multiply manuscripts of him.”

FitzGerald rewrote the quatrains into English – not as direct translations, but as poetic creations based on Omar. Publishing them was risky, because blasphemy was a crime in Victorian England, and skepticism was taboo. Fraser’s Magazine refused to print the Rubaiyat. FitzGerald finally paid to have five hundred copies printed privately in 1859, without his name attached.

The small books lay unnoticed for two years at a London bookstore, and some were sold as wastepaper. Remaining copies were put in a bargain bin for a penny each. A young man bought one and gave it to the painter Dante Gabriel Rossetti, who was fascinated and bought copies for the poets Robert Browning and Algernon Charles Swinburne. But the public remained unaware.

FitzGerald produced enlarged versions in 1868 and 1872. The anonymous book began drawing public attention. The translator’s identity became known, and FitzGerald was pleased by the “little craze” caused by his work.

FitzGerald’s eyesight failed, and he died in 1883. He never knew that his Rubaiyat went on to become a world classic that sold millions of copies in hundreds of editions.

Subsequently, researchers have found as many as 1,391 ancient quatrains attributed to Omar, and have attempted to separate the genuine ones from derivative concoctions, with little success.

Segments from the Rubaiyat, translated by FitzGerald:

“Myself when young did eagerly frequent / Doctor and saint, and heard great argument / About it and about: but evermore / Came out by the same door as in I went.

“With them the seed of wisdom did I sow / And with my own hand labored it to grow / And this is all the harvest that I reaped / ‘I came like water, and like wind I go.’

“Into this universe, and why not knowing / Nor whence, like water willy-nilly flowing / And out of it, as wind along the waste / I know not whither, willy-nilly blowing.”

“Alike for those who for today prepare / And those that after a tomorrow stare / A muezzin from the tower of darkness cries / ‘Fools! Your reward is neither here nor there.’

“Why, all the saints and sages who discussed / Of the two worlds so learnedly, are thrust / Like foolish prophets forth; their words to scorn / Are scattered, and their mouths are stopped with dust.

“Oh, threats of hell and hopes of paradise! / One thing at least is certain: this life flies; / One thing is certain, and the rest is lies; / The flower that once has blown forever dies.”

“The moving finger writes, and having writ / Moves on: nor all thy piety nor wit / Shall lure it back to cancel half a line / Nor all thy tears wash out a word of it.

“And that inverted bowl we call the sky / Whereunder crawling coop’d we live and die / Lift not your hands to it for help, for it / Rolls impotently on as thou and I.”

“Ah, Love, could thou and I with fate conspire / To grasp this sorry scheme of things entire / Would we not shatter it to bits, and then / Remold it nearer to the heart’s desire!”

“The revelations of the devout and learned / Who rose before us and as prophets burned / Are all but stories, which, awoke from sleep / They told their comrades, and to sleep returned.”

February 14, 2020
Commonwealth, XXII: Last Stand of the Librarians
Next Post

February 19, 2020 Abuse Among the Amish
Recent Comments
0 | Leave a Comment
"That would be an ethical quandary for the PR, though. If they recruited ordinary civilians ..."
Adam Lee Commonwealth, III.I: The Owl
"So alongside the virus, have you also given any thought to the idea of the ..."
Ian Kacprzak Commonwealth, III.I: The Owl
"Ah, I see what you mean! Apologies, I misunderstood.I tend to think the Pacific Republic ..."
Adam Lee Commonwealth, Interlude: Protestant Work Ethic
"Liar."
WMDKitty -- A Work In Progress It’s Not Anti-Semitic to Criticize Israel
Browse Our Archives
get the latest from
Daylight Atheism
Sign up for our newsletter
POPULAR AT PATHEOS Nonreligious
1