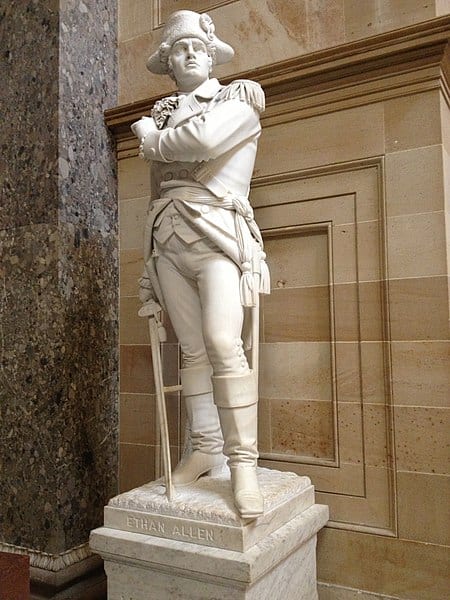 This is the seventh segment of a series on renowned skeptics throughout history. These profiles are drawn from 2000 Years of Disbelief: Famous People With the Courage to Doubt, Prometheus Books, 1996.

Ethan Allen, a reckless hero of the American Revolution, was just as reckless in attacking Christianity, which he called “superstition” in an unruly book.

A New England resident, Allen actually rebelled before the Revolution. A 1770 dispute over land grants threatened settlers with loss of their farms. They raised a defense regiment called the Green Mountain Boys, with Allen its colonel. The British governor of New York declared him an outlaw and put a price on his head. The settlers held the governor’s forces at bay.

When the Revolution broke out, the Green Mountain Boys joined the action and overwhelmed the British garrison at Fort Ticonderoga. Then Allen made a foolhardy attempt to capture Montreal, but was captured himself and sent to England as a prisoner. Later, he was released.

Allen was a freethinker. At his wedding, the ritual required him to pledge “to live with Fanny Buchanan agreeable to the laws of God.” Allen halted the ceremony in protest. Only after it was specified that his pledge meant the god of nature, as envisioned by Deists, did he proceed.

Before the war, Allen had worked with a fellow skeptic, Dr. Thomas Young, in drafting a book. But Young died, leaving the work unfinished. After the war, Allen revised the manuscript and published it under his name alone as Reason, the Only Oracle of Man. It was a scathing assault on Calvinist Christianity. The clergy seethed in anger. One minister published a verse rebuke:

“Behold, inspired from Vermont dens,
The seer of Antichrist descends
To feed new mobs with hell-born manna
In gentle lands of Susquehanna.”

“I have generally been denominated a Deist, the reality of which I have never disputed, being conscious that I am no Christian, except mere infant baptism makes me one; and as to being a Deist, I know not, strictly speaking, whether I am one or not.” – Reason, the Only Oracle of Man, 1784, preface

“…The doctrine of the Trinity is destitute of foundation, and tends manifestly to superstition and idolatry.” – ibid., p. 124

“That Jesus Christ was not a god is evident from his own words, where, speaking on the day of judgment, he says, ‘Of that day and hour, knoweth no man, not the angels which are in heaven, neither the son.’ This is giving up all pretension to divinity, acknowledging in the most explicit manner that he did not know all things.” – ibid., p. 125

“There is not any thing, which has contributed so much to delude mankind in religious matters, as mistaken apprehension concerning supernatural inspiration or revelation.” – ibid., p. 200

“They are blind with respect to their own superstition, yet they can perceive and despise it in others. Protestants very readily discern and expose the weak side of popery, and papists are as ready and acute in discovering the errors of heretics.” – ibid., p. 337

Footnote: Abraham Lincoln reportedly told a story about Allen’s stay in England. The American visited the home of a Briton who scornfully kept a painting of George Washington in his water closet. The host asked Allen what he thought of the gesture. Allen replied that it was quite appropriate, because “nothing could make an Englishman shit like the sight of George Washington.”