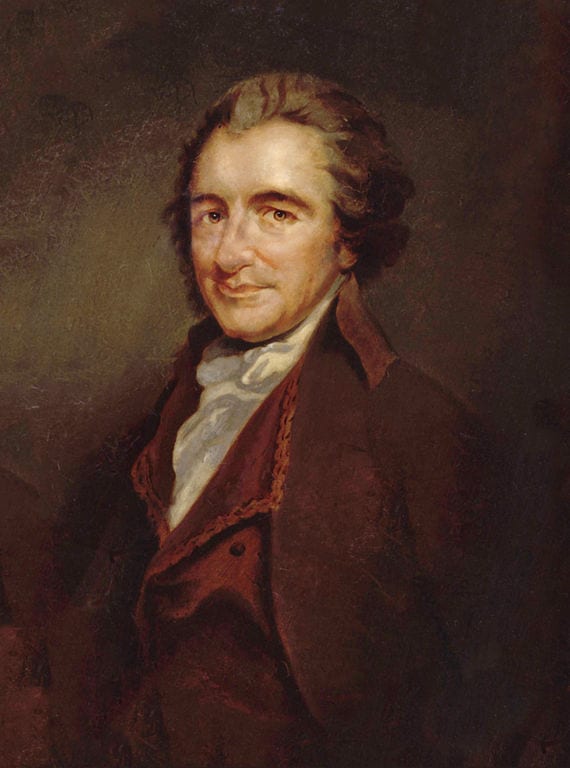 This is the sixth segment of a series on renowned skeptics throughout history. These profiles are drawn from 2000 Years of Disbelief: Famous People With the Courage to Doubt, Prometheus Books, 1996.

In the early 1900s, President Theodore Roosevelt wrote that Thomas Paine (1737-1809) – the fiery voice of the American Revolution – was a “filthy little atheist.” Many others throughout American history have shared this evaluation.

Actually, Paine was a Deist, who felt he could sense God in the immensity of nature, and who once wrote, “I hope for happiness beyond this life.”

However, he deemed Christianity and all other organized religions to be frauds sustained by priests and kings. This view, plus his crusading for people in need, kept Paine in trouble much of his life.

Paine was born in England, the son of a Quaker corset-maker. As a young man, he failed to find a suitable role for himself: he went through two brief marriages and several unsatisfactory jobs. Then, in London, Paine met Benjamin Franklin, who urged him to seek a career in America and gave him letters of introduction.

In 1774, Paine arrived in Philadelphia, where he became a writer for the Pennsylvania Magazine. Revolutionary fever was growing, and he joined the cry for independence and democracy. His fifty-page booklet, Common Sense, sold 500,000 copies in early 1776 and helped set the stage for the Declaration of Independence. The following winter, as the Colonial forces suffered, Paine wrote the first of sixteen Crisis pamphlets, opening with the renowned words: “These are the times that try men’s souls.” Washington ordered it read to his freezing soldiers at Valley Forge.

Throughout the War of Independence, Paine refused to take money from his pamphleteering, and led relief drives to aid the Colonial troops. After the victory, he was given a New York farm.

He returned to England in 1787, but was once more drawn into politics and wrote an attack on Prime Minister William Pitt. When Edmund Burke denounced the French Revolution, Paine replied with his famous The Rights of Man and a sequel, assailing monarchy and championing democracy. He proposed public education, opportunity for the poor, pensions for the aged, public works for the jobless, and other such reforms. England’s rulers called it an incitement to “bloody revolution.” The writer was charged with treason and his writings were seized.

Paine narrowly escaped to France, where the revolutionaries already had elected him to the National Convention. But he plunged into trouble again by opposing the guillotining of aristocrats. He was imprisoned, and a mark designating execution was chalked on the door of his cell, but mistakenly on the wrong side, so that it could not be seen when the door was closed.

While Paine was in prison, his The Age of Reason, an assault upon Christianity and the Bible, was published, sending a shock through much of the world. He was denounced in America and England as a blasphemer and disbeliever.

In 1794, when the Reign of Terror in France ended, Paine was released, but in broken health. In 1801, he grew homesick for America. His friend President Thomas Jefferson offered to send a warship to fetch him. But Paine knew that Jefferson, too, was being denounced as an infidel, and declined the offer, to avoid adding further stigma to Jefferson.

Paine returned quietly to America in 1802, where found himself widely hated. He lived in poverty, and died in New York City in 1809.

“All national institutions of churches, whether Jewish, Christian or Turkish, appear to me no other than human inventions, set up to terrify and enslave mankind, and monopolize power and profit.” – The Age of Reason, 1794

“Priests and conjurors are of the same trade.” – ibid

“Whenever we read the obscene stories, the voluptuous debaucheries, the cruel and tortuous executions, the unrelenting vindictiveness, with which more than half of the Bible is filled, it would be more consistent that we call it the word of a demon than the word of God. It is a history of wickedness that has served to corrupt and brutalize mankind.” – ibid

“What is it the New Testament teaches us? To believe that the Almighty committed debauchery with a woman engaged to be married; and the belief of this debauchery is called faith.” – ibid

“Take away from Genesis the belief that Moses was the author, on which only the strange belief that it is the word of God has stood, and there remains nothing of Genesis but an anonymous book of stories, fables, and traditionary or invented absurdities, or of downright lies.” – ibid

“The most detestable wickedness, the most horrid cruelties, and the greatest miseries that have afflicted the human race have had their origin in this thing called revelation, or revealed religion.” – ibid

“The adulterous connection of church and state….” – ibid

“The study of theology, as it stands in Christian churches, is the study of nothing; it is founded on nothing; it rests on no principles; it proceeds by no authorities; it has no data; it can demonstrate nothing….” – ibid

“The world is my country, all mankind are my brethren, and to do good is my religion.” – ibid

“Whence arose all the horrid assassinations of whole nations of men, women, and infants, with which the Bible is filled; and the bloody persecutions, and tortures unto death, and religious wars, that since that time have laid Europe in blood and ashes; whence arose they, but from this impious thing called religion, and this monstrous belief that God has spoken to man?” — quoted by Ira Cardiff, What Great Men Think of Religion

“Of all the systems of religion that ever were invented, there is none more derogatory to the Almighty, more unedifying to man, more repugnant to reason, and more contradictory in itself than this thing called Christianity. Too absurd for belief, too impossible to convince, and too inconsistent for practice, it renders the heart torpid or produces only atheists or fanatics. As an engine of power, it serves the purpose of despotism, and as a means of wealth, the avarice of priests, but so far as respects the good of man in general, it leads to nothing here or hereafter.” – ibid

“Belief in a cruel God makes a cruel man.” — quoted by George Seldes in The Great Quotations

“One good schoolmaster is of more use than a hundred priests.” – ibid

“The Bible has been received by the Protestants on the authority of the Church of Rome…. We do not admit the authority of that church with respect to its pretended infallibility, its manufactured miracles, its setting itself up to forgive sins. . . . It was by propagating that belief and supporting it by fire and fagot that she kept up her temporal power.” – unsigned contribution to The Prospect, 1804

“The age of ignorance commenced with the Christian system.” – from Peter’s Quotations