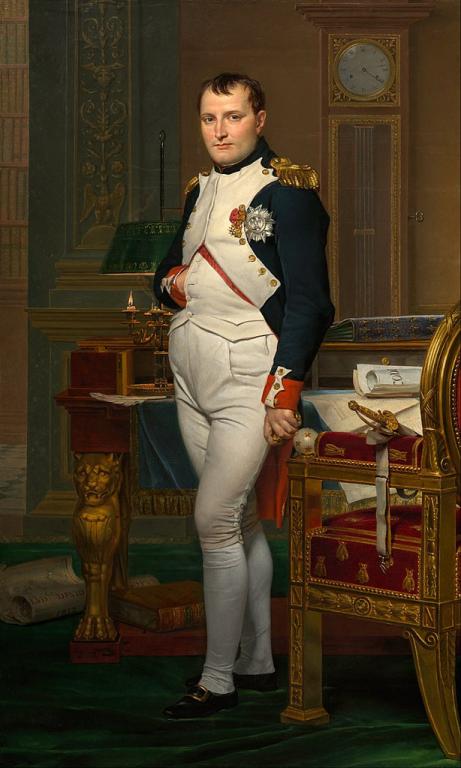 This is the ninth segment of a series on renowned skeptics throughout history. These profiles are drawn from 2000 Years of Disbelief: Famous People With the Courage to Doubt, Prometheus Books, 1996.

Whether you regard Napoleon as a brilliant hero (which he was) or an opportunistic egomaniac (which he also was), he remains a colossal figure in world history. He conquered most of Europe – until his lust for power brought him and a million Frenchmen to destruction.

Perhaps it’s not surprising to learn that Napoleon was an agnostic during his years of triumph, but that as he neared death, broken by captivity, he uttered religious declarations.

Napoleon’s rise began with the French Revolution, which was a rebellion against religion as well as against aristocratic greed. France’s growing middle class came to disbelieve in the divine right of kings, and resented the parasitic luxury of the clergy and nobles. When the people’s Assembly gained control in 1789, one of its first acts was to seize church property and order priests to swear loyalty to the new regime.

At that time, Napoleon was a young military officer who joined the radical Jacobin political club and made speeches against archbishops and aristocrats. After Jacobin zealotry produced the Reign of Terror, ending with the group’s destruction, Napoleon was arrested briefly, but soon regained his army post.

When rioting royalists attempted to storm the National Convention in 1795, Napoleon ordered his troops to mow them down with grapeshot. Thus he saved the republic and became a public hero. Given ever-larger military commands, he began to win victories for France.

Cynically, Napoleon used religion for power. While leading a French army in Egypt, he half declared himself a Muslim and an enemy of the pope to gain support of Egyptian potentates. When the Egyptian campaign bogged down, he slipped back to France, conspired with military colleagues, and staged a 1799 coup that installed him as First Consul, a dictator. Soon, he reached an accommodation with the Catholic Church, to the chagrin of freethinkers who had fought the church in the revolution.

“Among the Turks, I was a Mohammedan; now I shall become a Catholic,” Napoleon told aides. To seal the agreement with the Vatican, he attended an extravagant mass in Notre Dame cathedral – but told confidants he would not take the sacrament “or participate in all the rest of the hocus-pocus that makes a man ridiculous.”

Napoleon still defied the church. At his coronation as emperor in 1804, he seized the crown from the hands of Pope Pius VII and placed it upon his own head. Five years later, with Italy under French control, Napoleon demanded that Pius submit to his authority; but the pope replied by excommunicating the emperor. Napoleon laughed at the decree and told his lieutenants: “In these enlightened days, none but children and nursemaids are afraid of curses.” He had Pius seized and imprisoned temporarily.

Napoleon had two wives and several mistresses. He lived with a dazzling flair, leading armies in mighty conquests, setting up surrogate kingdoms with his brothers and sisters as rulers.

But Napoleon’s self-aggrandizement eventually brought doom. He lost a half million troops in a futile attempt to conquer frozen Russia in the winter of 1812. Nations he had trampled united against him and forced him to abdicate in 1814. He was exiled to the Mediterranean island of Elba. But he escaped, returned to France, raised another army, and met final defeat at Waterloo. An exile once more, Napoleon was confined this time to the barren island of St. Helena, off the African coast, where he spent the final six years of his life.

“I would believe in a religion if it existed ever since the beginning of time, but when I consider Socrates, Plato, Mahomet, I no longer believe. All religions have been made by men.” – to Gaspard Gourgaud at St. Helena, Jan. 28, 1817

“If I had believed in a God of rewards and punishments, I might have lost courage in battle.” – ibid., 1815

“I do not think Jesus Christ ever existed.” – ibid.

“It remains an open question whether Christ ever lived.” – to German novelist Christoph Wieland

“My firm conviction is that Jesus … was put to death like any other fanatic who professed to be a prophet or a messiah; there have been such persons at all times… . Besides, how could I accept a religion which would damn Socrates and Plato?… I cannot believe there is a god who punishes and rewards, for I see honest folk unlucky, and rogues lucky.” – Ludwig, p. 600

“The Society of Jesus is the most dangerous of orders, and has done more mischief than all the others.” – to Barry O’Meara, St. Helena, Nov. 2, 1816

“Last Sunday I was walking here alone when I heard the church bells of Ruel. I felt quite moved by the sound; so strong is the power of early association. I said to myself, ‘If such a man as I am can be affected in this way, how deep must the impression be on simple believing souls?’ What have your philosophers and ideologues to say to that? A nation must have a religion, and that religion must be under the control of the government.” – to Count Antoine Thibaudeau, June 1801, recounted in Thibaudeau’s book, Bonaparte and the Consulate

“Man’s uneasiness is such that the vagueness and the mystery which religion presents are absolutely necessary to him.” – Maxims, 1804-1815

“The merit of Mahomet is that he founded a religion without an inferno.” – ibid

“Knowledge and history are the enemies of religion.” – ibid

“If I had to choose a religion, the sun as the universal life-giver would be my god.” – quoted by Ira D. Cardiff in What Great Men Think of Religion

“One of my grand objects was to render education accessible to everyone…. All my exertions were directed to illuminate the mass of the nation instead of brutifying them by ignorance and superstition.” – ibid

“Everything is more or less organized matter. To think so is against religion, but I think so just the same.” – ibid

“How can you have order in a state without religion? For, when one man is dying of hunger near another who is ill of surfeit, he cannot resign himself to this difference unless there is an authority which declares ‘God wills it thus.’ Religion is excellent stuff for keeping common people quiet.” – quoted in American Freeman

“I am surrounded by priests who repeat incessantly that their kingdom is not of this world, and yet they lay hands on everything they can get.” – quoted by Rufus K. Noyes in Views of Religion

“Priests have everywhen and everywhere introduced fraud and falsehood.” – ibid

“The popes set Europe in flames. Perhaps it is yours to reestablish scaffolds and racks, but it shall be my care that you do not succeed.” – to a high church official, ibid

“All our religions are evidently the work of man.” – ibid

“The Christian creed is hostile to the perfect polity, for by bidding men look forward to another life it renders them submissive to the evils of the present.” – ibid

“I once had faith, but when I came to know something, I found my faith attacked. It is said that I am a papist; I am nothing.” – ibid