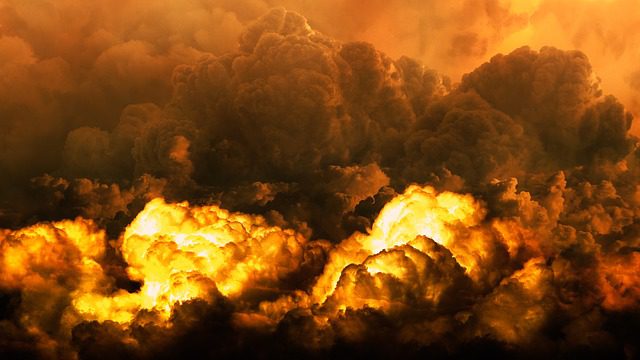 Last week, in my post on how religion spreads COVID-19, I noted that although there are individual people irresponsibly flouting social-distancing rules, it’s almost exclusively right-wing churches that are arguing they have a right to keep congregating in large groups. I have more evidence for that.

[UPDATE, 4/22/20: Liberty University has demanded a retraction of the above paragraph, claiming that the New York Times story it’s based on is libelous. I disagree. See my reply.]

Similarly, Rodney Howard-Browne, the Florida pastor who sneered at those staying at home as “pansies”, was just arrested for holding large church services in defiance of a stay-home order.

And to show that this deranged behavior spans the theological aisle: in New York, a Jewish man is suing over the state’s ban on large gatherings, saying that it infringes on his faith.

Greetings from New York City, the new world epicenter of the COVID-19 epidemic. I’m healthy and well, as is everyone in my family. I know of a few cases in my extended social circle, but so far, no one I know personally has died.

I realize I’m fortunate. Elmhurst Hospital in Queens, just a few miles from me, is ground zero for the virus. Hundreds of people are dying, and thousands more are out of work and facing an uncertain future.

In the last few days, my city has witnessed one surreal scene after another. Times Square and other world landmarks have become ghost towns. The Empire State Building’s spire is flashing like an ambulance siren. The USNS Comfort, a Navy hospital ship with 1,000 beds, arrived on Monday. The Jacob Javits Center is being converted into one of the largest hospitals in the country virtually overnight with help from the Army Corps of Engineers. Samaritan’s Purse, an evangelical charity, has set up a tent hospital in Central Park. And a call for retired medical professionals and those in private practice to step up got an amazing 76,000 volunteers.

For New York’s already overtaxed doctors and nurses, this is a welcome relief. But for the rest of the country, it should be a frightening omen. NYC is the epicenter of the epidemic, but that’s not going to be true forever. You can glimpse what’s coming in an article from FiveThirtyEight, The Coronavirus Isn’t Just A Blue State Problem:

Overall, although the number of detected cases is higher in blue states, the number is increasing at a more rapid rate in red states. Moreover, blue states have conducted more tests per capita than red states, so — given that the large majority of coronavirus cases remain undetected — the lower rate of cases in red states may partially be an artifact of less testing.

Nine of the 10 states that have seen the most rapid increase in coronavirus from Monday to Thursday are states that voted for Trump in 2016, led by Texas, where the number of reported cases increased by 297 percent.

The nature of exponential growth is that cases double every few days. As the world saw in Italy and is now seeing in New York, this means that a tiny trickle becomes a deluge almost overnight. It should give other states no comfort that their absolute number of COVID-19 cases is small. That number is going to grow very quickly – especially since most of them have run hardly any tests, so the number detected so far is the tip of an iceberg.

The only way to interrupt this grim math is with social distancing and stay-at-home orders, choking the spread of the virus and denying it chances to jump to new hosts. In many blue states, governors have already taken these steps. But:

Republican governors in several states have downplayed the virus, either refusing to enforce social-distancing measures or even overruling local officials who attempt to do so. A new study finds that the single factor that best explains the speed of state-level reaction is its governor’s partisan identity. “States with Republican governors and Republican electorates delayed each social distancing measure by an average of 2.70 days,” the authors find, “a far larger effect than any other factor, including state income per capita, the percentage of neighboring states with mandates, or even confirmed cases in state.”

It’s not just the Republican leadership, but the Republican rank-and-file. In conservative enclaves, social distancing is the new culture-war issue, and they’re agin’ it – some because they’re libertarians who reject the idea of government telling anyone to do anything, and some out of a knee-jerk reflex to do the opposite of anything liberals are doing. You might notice a familiar name in this excerpt:

Polling data suggest that Republicans throughout the U.S. are much less concerned about the coronavirus than Democrats are. According to a recent analysis by The New York Times, Trump won 23 of the 25 states where people have reduced personal travel the least.

…Katherine Vincent-Crowson, a 35-year-old self-defense instructor from Slidell, Louisiana, has watched in horror this month as businesses around her city were forced to close by state decree. A devotee of Ayn Rand, Vincent-Crowson told me Louisiana’s shelter-in-place order was a frightening example of government overreach… [She says,] “I’m a libertarian… I don’t really like being told what to do.”

Since these red states have scorned the advice of public-health experts, there’s every reason to believe that they’ll be hit harder by the coronavirus than New York. How are they going to cope?

Here’s a fact that would give Donald Trump a chill of fear, if he had the capacity to think of anyone or anything but himself: 1 in 8 Trump voters lives in a county with zero ICU beds.

About 8.3 million people who voted for Trump in 2016 live in counties where there are no ICU beds or no hospitals. That amounts to about 13 percent of the total votes Trump earned in that election, or one out of every eight votes.

…More importantly, those counties which voted for Trump are home to about 6.5 million people over the age of 60, people in a particularly high-risk group for contracting covid-19.

New York is dealing with a tsunami of coronavirus cases that hospitals are straining to absorb, but they were starting from a higher baseline. Many red states’ health care systems were already underfunded and stretched to the breaking point. If they’re hit with the same deluge of cases, they’re going to collapse completely.

For logistical reasons, hospitals are more likely to be located in dense metropolitan areas rather than thinly populated rural counties. This means that voters in rural areas, who are overwhelmingly Republican, are poorly positioned to face a public-health crisis – especially since Republicans are also disproportionately elderly, and the virus is much deadlier in that age group.

But what makes this already bad situation even worse is that dozens of rural hospitals have closed in the last few years, and many more are on the brink. Why? Because the red states where most of these hospitals are found have refused to expand Medicaid under Obamacare:

The states that have experienced the most rural hospital closures over the last 10 years (Texas, Tennessee, Oklahoma, Georgia, Alabama, and Missouri) have all refused to expand Medicaid through the 2010 health care law. It seems their rural hospitals are paying the price. Of the 216 hospitals that Chartis says are most vulnerable to closure, 75 percent are in non-expansion states. Those 216 hospitals have an operating margin of negative 8.6 percent.

Again, as I said last time, I don’t describe this as karma or poetic justice – that would be unconscionably cruel – but I don’t hesitate to call it cause and effect. Republican voters in these states and counties have chosen over and over again to elect politicians who kick them in the teeth. They’ve voted to shred their own safety nets, and now that a crisis has arrived where that safety net would have helped, they’re on their own.

It’s the ultimate rejection of John Rawls’ veil of ignorance, which posits that you should design a society you wouldn’t be afraid to live in without knowing your place in advance. Republican voters, in a perverse way, are doing the exact opposite: they’re crafting a society that’s intentionally cruel to its poor and its disadvantaged, even knowing that they’re among that group. Now that decision is about to rebound on them, with catastrophic consequences.

April 5, 2020 Commonwealth, XXIX: Into Hell
Recent Comments
0 | Leave a Comment
Browse Our Archives
get the latest from
Daylight Atheism
Sign up for our newsletter
POPULAR AT PATHEOS Nonreligious
1