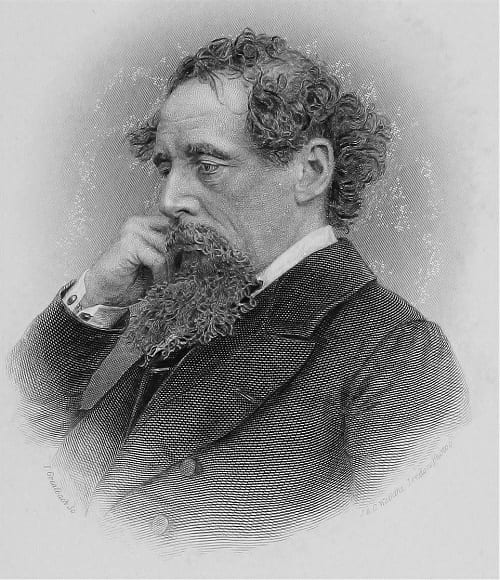 This is the twelfth segment of a series on renowned skeptics throughout history. These profiles are drawn from 2000 Years of Disbelief: Famous People With the Courage to Doubt, Prometheus Books, 1996.

Charles Dickens, widely deemed the greatest English novelist, was not quite a religious skeptic, nor was he quite a believer. Perhaps he typifies the uncertainty and contradictions in millions of people. Dickens cared deeply for religion’s message of compassion, and he prayed regularly; yet he attacked church dogmas and rituals, scorned nearly every faith, and temporarily joined the Unitarians, who reject the divinity of Jesus.

“Inclining toward Unitarianism, he had little respect for mystical religious dogma. He hated the Roman Catholic Church, ‘that curse upon the world,’ as the tool and coadjutor of oppression throughout Europe…. He thought the influence of the Roman Church almost altogether evil. … He had rejected the Church of England and detested the influence of its bishops in English politics.”

Sparing no group, Dickens ridiculed fundamentalist evangelicals who whooped and danced in Victorian England. He lampooned them repeatedly in his works. For example, in chapter 15 of Dombey and Son, the Rev. Melchisedech Howler, Minister of the Ranting Persuasion, unleashes an arm-flailing sermon in the front parlor of a private home, driving his followers into the “rapturous performance of a sacred jig,” which causes the floor to collapse “through into a kitchen below, and disabling a mangle belonging to one of the fold.”

Dickens has been called a “human hurricane” of literature, theater, journalism, and the lyceum. Born into a lower-middle-class religious family, he hated the two­ hour worship services he was forced to attend as a child. At age twelve Dickens was removed from school and put to work in a factory, because his father had been imprisoned for debts. Both experiences marked him, and later provided inspiration for his novels.

Quick-minded, Dickens became an office clerk at fifteen, then a shorthand stenographer in law courts, and finally a reporter for a liberal newspaper. He was asked to write a serial narrative to accompany comic engravings – thus Pickwick Papers was born. It became a sensation and propelled Dickens instantly to fame as a writer.

Dickens churned out stories, plays, novels and essays at a frenzied pace. He also performed on the stage, and edited reform-minded magazines which attacked the privileged classes for their abandonment of England’s poor. Later in life, he made Lyceum tours, enchanting crowds with theatrical readings of scenes from his fiction.

When a pious member of Parliament introduced a bill to ban all recreation and public activity on the Sabbath, Dickens exploded with a ferocious pamphlet titled Sunday under Three Heads. He said the “saintly law-givers lift up their hands to heaven,” championing a law for piety, but “the whole of the saintly venom” would fall upon the poor, whose only enjoyment was a Sunday outing after six days of drudgery. The pamphlet sneered at the stupid bigotry in a fundamentalist church: “There is something in the sonorous quavering of the harsh voices, in the lank and hollow faces of the men and the sour solemnity of the women, which bespeaks this a stronghold of intolerant zeal and ignorant enthusiasm.”

During a trip to Rome, Dickens wrote to his friend John Forster that the elaborate Catholic worship rituals of Holy Week were “a great farce” in which the pious fell to their knees in “senseless and unmeaning degradation.”

Dickens quit the Anglican Church and joined a Unitarian congregation. After a few years, he resumed attending his former church, then quit again, saying: “I cannot sit under a clergyman who addresses his congregation as though he had taken a return ticket to heaven and back.”

But Dickens was a living contradiction. Amid all his scorn, he cared profoundly about religion, especially Christ’s advocacy of kindness. He wrote a detheologized Life of Our Lord for his own nine children. He also prayed daily, and urged his offspring to do likewise. A year before his death, as his youngest son, Edward, was leaving for Australia, Dickens gave him a New Testament and a letter urging him to follow Jesus. In his will, he wrote a declaration of Christian belief.

Perhaps the riddle of Dickens was best summed up by biographer Hesketh Pearson:

“As to the church, my friend, I am sick of it. The spectacle presented by the indecent squabbles of priests of most denominations, and by the exemplary unfairness and rancor with which they conduct their differences … utterly repel me.” – letter to William de Cerjat, 1864

“The preacher is a coarse, hard-faced man of forbidding aspect. … He stretches his body half out of the pulpit, thrusts forth his arms with frantic gestures, and blasphemously calls upon the Deity to visit with eternal torments those who tum aside from the word, as interpreted and preached by – himself. A low moaning is heard, the women rock their bodies to and fro, and wring their hands.” – Sunday under Three Heads, 1836

“The congregation fall upon their knees and are hushed into profound stillness as he delivers an extempore prayer, in which he calls upon the sacred founder of the Christian faith to bless his ministry, in terms of disgusting and impious familiarity.” – quoted by Rufus K. Noyes in Views of Religion

“And now they sit down to a cold and cheerless dinner; the pious guardians of man’s salvation having, in their regard for the welfare of his precious soul, shut up the bakers’ shops.” – ibid

“I believe the dissemination of Catholicity to be the most horrible means of political and social degradation left in the world.” – ibid

“It is a good example of the superstitions of the monks that this missal was placed upon a tub, which … was uncovered and shown to be full of dead men’s bones ­ bones, as the monks pretended, of saints.” – ibid

“Missionaries (Livingstone always excepted) are perfect nuisances, and leave every place worse than they found it.” – quoted by Jack Lindsay in Charles Dickens: A Biographical and Critical Study (New York: Philosophical Library, 1950), p.39

“I have a sad misgiving that the religion of Ireland lies as deep at the root of all its sorrows, even as English misgovernment and Tory villainy.” – letter to John Forster, August 1846