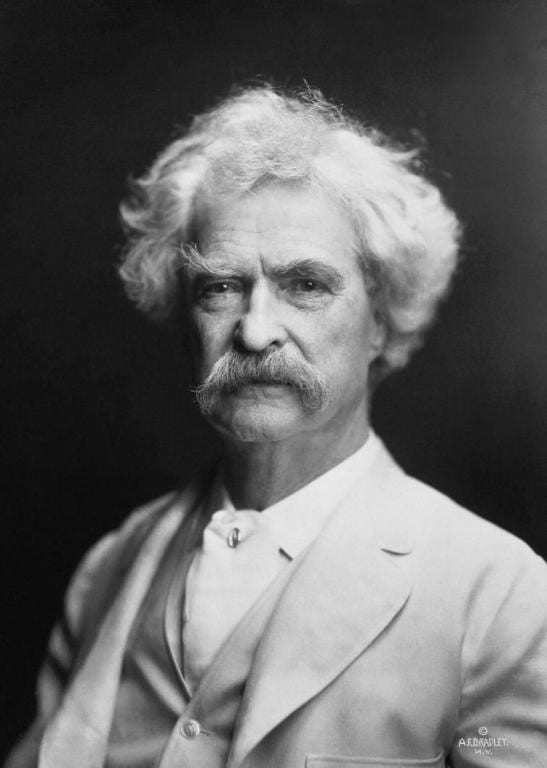 This is the sixteenth segment of a series on renowned skeptics throughout history. These profiles are drawn from 2000 Years of Disbelief: Famous People With the Courage to Doubt, Prometheus Books, 1996.

Wonderfully funny, sad, exuberant, sardonic and human, Mark Twain (1835-1910) is perhaps America’s most beloved writer. He is a familiar national fixture, like the Grand Canyon or the White House.

Less known, however, is the scorn Twain felt for religion. His contempt for supernaturalism was kept secret for half a century after his death, lest it ruin his stature in Christian America. Even now, his agnosticism is never mentioned in public schools, and rarely in the public media.

Born Samuel Langhorne Clemens, Mark Twain grew up in Hannibal, Missouri, on the bank of the mighty Mississippi, where he soaked up the boisterous, bawdy, colorful life of a river town. He quit school at thirteen to become an apprentice printer, and soon was writing sketches for a newspaper published by his older brother. When Twain was seventeen, one of his humorous pieces was printed in a Boston journal.

At eighteen he became a roving printer, working in St. Louis, New York, Philadelphia and Washington before rejoining his brother in Iowa. At twenty­ two, Twain headed for South America – but on the steamboat down the Mississippi, he decided to become a river pilot. He plied the trade for four years, until the Civil War halted river traffic. Then he headed West, prospected for gold, and wrote for a Nevada paper.

In 1863 he adopted the pseudonym Mark Twain, from a shout uttered by rivermen when they measure two fathoms of water depth. Two years later, the rowdy tale “The Celebrated Jumping Frog of Calaveras County,” published in the New York Evening Press, launched Twain to national fame. Twain’s journalistic travels took him to South America, Europe and the Middle East, from where he sent back humorous accounts. His writings gained ever-greater acclaim, and he became a popular lecturer.

In 1870 Twain married an upstate New York woman; was briefly part owner of a Buffalo newspaper; and then, on the strength of his earnings, built a huge home in Hartford, Connecticut, where both his family life and his writing career flowered. The Adventures of Tom Sawyer, The Prince and the Pauper, Adventures of Huckleberry Finn, and A Connecticut Yankee in King Arthur’s Court immortalized him in American literature. His depth was especially revealed in Huckleberry Finn, as the white urchin grows to respect a runaway slave.

Amid his success, Twain encountered tragedy. A son died in infancy. Unlucky investments put Twain into bankruptcy. As he wrote and toured to earn money to repay creditors, his oldest daughter died, then his wife, then his youngest daughter. Late in life, deeply bitter, Twain unleashed the religious disbelief he had revealed only in hints before. He wrote stark fantasies such as The War Prayer, in which fervent patriots beg God for a massacre of the enemy. He scoffed at religion in Letters From the Earth, a spoof in which Satan visits the planet, examines its people, and writes accounts to fellow angels in heaven.

After Twain’s death in 1910, his only survivor, his daughter Clara, and his publishers suppressed Letters From the Earth and several other anticlerical stories. The Mysterious Stranger, which denies the existence of a beneficent Providence, was first published only in 1916. And it was not until 1962 that Clara allowed the Letters to be released.

“I cannot see how a man of any large degree of humorous perception can ever be religious – except he purposely shut the eyes of his mind & keep them shut by force.” – Mark Twain’s Notebooks and Journals, edited by Frederick Anderson, 1979, notebook 27, August 1887-July 1888

“No church property is taxed, and so the infidel and the atheist and the man without religion are taxed to make up the deficit in the public income thus caused.” – ibid., notebook 21

“Faith is believing what you know ain’t so.” – “Pudd’nhead Wilson’s New Calendar,” in Following the Equator, 1897

“In religion and politics, people’s beliefs and convictions are in almost every case gotten at second-hand, and without examination, from authorities who have not themselves examined the questions at issue but have taken them at second-hand from other nonexaminers, whose opinions about them were not worth a brass farthing.” – Mark Twain’s autobiography

“In prayer we call ourselves ‘worms of the dust,’ but it is only on a sort of tacit understanding that the remark shall not be taken at par.” – “Does the Race of Man Love a Lord?” in North American Review, April 1902

“It ain’t those parts of the Bible that I can’t understand that bother me, it is the parts that I do understand.” – Peter’s Quotations: Ideas for Our Time

“One of the proofs of the immortality of the soul is that myriads have believed it. They also believed the world was flat.” – ibid.

“Man… is kind enough when he is not excited by religion.” – comment by a horse, What Great Men Think of Religion, by Ira Cardiff

“The prophets wrote book after book and epistle after epistle, yet never once hinted at the existence of a great continent on our side of the water; yet they must have known it was there, I should think.” – ibid.

“Christianity does not convert the Hindus, because our Bible miracles are not so large as theirs.” – ibid.

“If he was seeking after the Only True Religion, he found it in one or another of the three thousand that are on the market.” – ibid.

“Missionarying – that least-excusable of all human trades.” – ibid.

“After a long time and many questions, Satan said, ‘The spider kills the fly, and eats it; the bird kills the spider and eats it; the wildcat kills the goose; the-well they all kill each other. It is murder all along the line. Here are countless multitudes of creatures, and they all kill, kill, kill, they are all murderers. And they are not to blame, Divine One?’ ‘They are not to blame. It is the law of their nature. And always the law of nature is the Law of God.’ ” – Letters From the Earth (Perennial Library, 1974), p. 13

“The human being … naturally places sexual intercourse far and away above all other joys – yet he has left it out of his heaven.” – ibid., p. 17

“Man is a marvelous curiosity…. He thinks he is the Creator’s pet. … He prays to Him, and thinks He listens. Isn’t it a quaint idea? Fills his prayers with crude and bald and florid flatteries of Him, and thinks He sits and purrs over these extravagancies and enjoys them. He prays for help, and favor, and protection, every day; and does it with hopefulness and confidence, too, although no prayer of his has ever been answered. The daily affront, the daily defeat, do not discourage him, he goes on praying just the same. There is something almost fine about his perseverance. I must put one more strain upon you: he thinks he is going to heaven! He has salaried teachers who tell him that. They also tell him there is a hell, of everlasting fire, and that he will go to it if he doesn’t keep the Commandments….” – ibid., “Satan’s Letter,” pp. 14-15

“Many of these people have the reasoning facility, but no one uses it in religious matters.” – ibid., p. 24

“Even the Church, which is credited with having spilt more innocent blood, since the beginning of its supremacy, than all the political wars put together have spilt, has observed a limit. A sort of limit. But you notice that when the Lord God of Heaven and Earth, adored Father of Man, goes to war, there is no limit. He is totally without mercy – he, who is called the Fountain of Mercy. He slays, slays, slays! All the men, all the beasts, all the boys, all the babies; also all the women and all the girls, except those that have not been deflowered.” – ibid., “Letter 11,” p. 52

“In August 1572 … in Paris and elsewhere in France … it was Christian against Christian. The Roman Catholics, by previous concert, sprang a surprise upon the unprepared and unsuspecting Protestants, and butchered them by the thousands ­ both sexes and all ages. This was the memorable St. Bartholomew’s Day. At Rome the Pope and the Church gave public thanks to God when the happy news came. During several centuries, hundreds of heretics were burned at the stake every year because their religious opinions were not satisfactory to the Roman Church….” – ibid., pp. 175-76

“No other creature’s religion has wrought such marvels of murderous atrocity as the meek and lowly religion of the Frenchman….The Frenchman is nothing if not pious. He is not content to be pious all by himself; he requires his neighbor to be pious also – otherwise he will kill him and make him so. Yes, if that neighbor declines to lead a holy life, he will take an ax and convert him….” – ibid., The French and the Commanches, pp. 146–48

“During many ages there were witches. The Bible said so. The Bible commanded that they should not be allowed to live. Therefore the Church, after doing its duty in but a lazy and indolent way for eight hundred years, gathered up its halters, thumbscrews and firebrands, and set about its holy work in earnest. She worked hard at it night and day during nine centuries and imprisoned, tortured, hanged and burned whole hordes and armies of witches, and washed the Christian world clean with their foul blood. Then it was discovered that there was no such thing as witches, and never had been. One doesn’t know whether to laugh or to cry. Who discovered that there was no such thing as a witch – the priest, the parson? No, these never discover anything….” – Europe and Elsewhere

“If man continues in the direction of enlightenment, his religious practice may, in the end, attain some semblance of human decency.” – ibid.