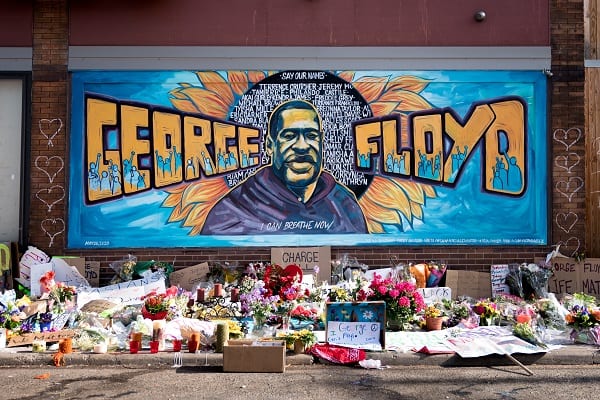 In just the last few years, we’ve had one painful reminder after another that violent, state-sanctioned racism against people of color isn’t a relic of the past, but a present and ongoing reality. There was Michael Brown in Ferguson, Eric Garner in New York, and too many more.

The latest of these American atrocities is the death of George Floyd in Minneapolis, murdered by a sadistic thug in the uniform of the state who slowly choked him to death on camera while he pleaded for his life. Before that, there was Breonna Taylor, shot and killed by police in her own home, and Ahmaud Arbery, murdered by two white vigilantes while jogging in his own neighborhood.

The protests that exploded across the country last weekend are an expression of justifiable rage from a population that’s fed up. But what astonishes me is the sheer number of them. It’s not just in large, liberal cities like New York or Chicago or San Francisco, but in smaller cities, in red states, places not normally thought of as bastions of diversity: Fort Wayne and Indianapolis, Indiana; Des Moines, Iowa; Kansas City, Missouri; Omaha, Nebraska; Oklahoma City, Oklahoma.

At this point, the magnitude of the protests shows that it’s about more than one life. George Floyd’s death may have been the spark, but it was a spark that ignited a vast field of dry tinder. I wonder how much of it has to do with the pandemic and the depression. Millions of Americans are out of work, feeling despair for the future, and have given up hope that the government will offer them any meaningful help. They have no job to occupy their time, no money, no hope, and nothing to lose. An inciting incident of police brutality became a focal point for all their pent-up rage.

But rather than trying to calm the crowds, the police seem determined to prove the protesters’ point. In countless incidents, in city after city, they’ve reacted with indiscriminate brutality against journalists, medics and peaceful demonstrators: beating them with batons, ramming them with cars, shooting them in the face with rubber bullets, using flashbang grenades and pepper spray and tear gas as weapons of torture. In many cases, there’s no reasonable interpretation other than that the police deliberately targeted the media and nonviolent protesters for mayhem. Their behavior is that of an occupying army trying to suppress a conquered population by force.

Here are just a few examples:

There’s more and more and more of this, more than I could document in a single post. See this extended Twitter thread, or this one, or this Vox article listing attacks on journalists who clearly identified themselves as such.

While most of the protests have been peaceful, some have degenerated into mob violence. In many cities, businesses have been looted and burned. Minneapolis’ Third Precinct, where the killer worked, was overrun and burned to the ground. Police cars have also been vandalized and burned.

That said, I reject lazy both-sides-do-itism. It’s not necessary for every protest or every protester to be strictly peaceful for us to sympathize with their goals. There are people who’ve been pushed to the ends of their endurance and beyond, who’ve come to believe – and I won’t say wrongly – that white America will never stop brutalizing them unless it’s forced to. It’s also clear that there are white supremacist agitators who’ve infiltrated the protests, seeing them as a chance to commit acts of terrorism and hoping to tar peaceful protesters in the bargain. And some, I have no doubt, are apolitical vandals who just want to smash windows and steal stuff for themselves.

But in almost every case, the police’s hair-trigger violence has inflamed and worsened the situation rather than deescalated it. They’ve consistently acted as if they’re a law unto themselves. They seem to believe that they’re not accountable either to the elected officials they serve or the people they supposedly protect. (In New York, even Mayor Bill de Blasio’s daughter Chiara was arrested at a protest – and then a police union publicly posted her arrest report with personal details, a blunt threat of intimidation via doxing.)

Under the circumstances, it’s not surprising that people are resorting to violence. Why wouldn’t they, when nonviolent protesters are treated exactly the same as looters and brick-throwers? What’s the incentive to be peaceful and restrain yourself when the police feel no such compunction?

The police are insubordinate and out of control, and every effort to rein them in has failed. As recently as 2015, Minneapolis implemented a massive three-year reform that included training on implicit bias, deescalation and community dialogue. It clearly accomplished nothing. Historically, the only check on the police has been federal oversight, and now that’s gone as well. (The white supremacist, Trump-loving head of Minneapolis’ police union has gloated about this.)

The only solution is to disarm and defund the police. Cut their budgets and take away their toys; strip them of the military equipment that the federal government showers on them. Pull them out of schools. End no-knock warrants. Send them on patrol unarmed (more civilized countries already do this) so that dialogue and deescalation have to be their first choice. End qualified immunity so they can be held personally liable for egregious abuses of power. Repeal drug laws and decriminalize petty offenses that give them carte blanche to harass and terrorize minorities; force them to have an actual reason to detain or arrest someone.

And with all the money we’ll save, we can invest in low-income housing, in schools and public colleges, in affordable healthcare and mental-health resources, in public-works jobs programs: everything that Americans need to live in dignity, and the lack of which drives them to crime. We can fix all the social problems that, right now, America can only conceive of solving with pepper spray and handcuffs.

Image: A mural and memorial to George Floyd at the site of his death in Minneapolis, Minnesota. Photo by Lorie Shaull, released under CC BY-SA 2.0 license.