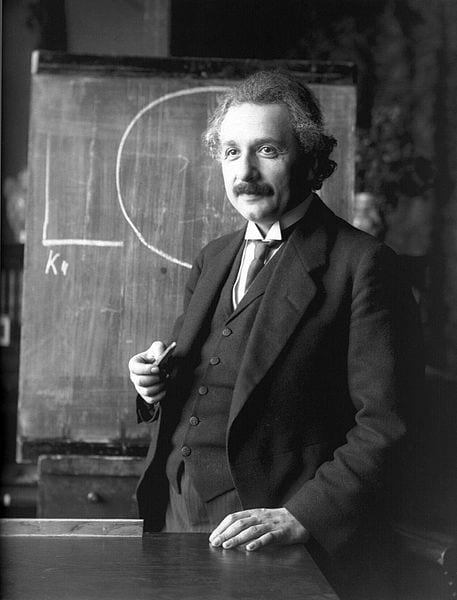 This is the 21st segment of a series on renowned skeptics throughout history. These profiles are drawn from 2000 Years of Disbelief: Famous People With the Courage to Doubt, Prometheus Books, 1996.

Arguably, Albert Einstein was the greatest scientist who ever lived. He singlehandedly transformed humanity’s grasp of reality and the universe. As a quiet clerk in the Swiss patent office, with no instrument but his mind, he pondered riddles of physics and conceived astonishing answers.

Einstein’s famous equation E=MC2 showed that matter and energy are interchangeable, ushering in the age of nuclear power. His theory of special relativity showed that time, space and mass change with speed, while his theory of general relativity revealed that gravity warps space, causing light to bend. Einstein’s work on the photoelectric effect showed that light travels as particles (photons) as well as waves. His groundbreaking paper on Brownian Motion demonstrated that molecules in gas or liquid are in eternal, chaotic movement. From his principles, scientists developed multitudes of modem devices, from hydrogen bombs to fluorescent lights.

Yet, in later years, Einstein hindered another advance: quantum explanations of functions within the atom. In his resistance, he said, “God does not play dice with the universe.” This and other references to God caused many clergymen to declare Einstein a religious believer, but that was untrue.

Einstein used the word God, as some physicists do, to symbolize the mysterious laws that govern all matter, energy and movement. He felt what he called a “cosmic religion,” a sense of awe before the immensity of the universe and the unfathomable forces that make it function. (Einstein’s espousal of cosmic faith caused Catholic Bishop Fulton J. Sheen to quip: “Who ever wanted to die for the Milky Way?”)

Einstein’s opposition to supernaturalism is clear in his personal writing and in testimony of his intimate friends. Peter Bucky, a young confidant of the genius, wrote a charming memoir that illuminated Einstein’s romantic pursuit of women, his enchantment with sailing, and his utter lack of interest in organized religion. Bucky wrote:

“Einstein told me many times that he did not believe in a single God. He said he could not imagine how God could manifest himself in a human countenance. Rather, he believed that there was a cosmic force that could develop things that mortal men could not even begin to comprehend…. I recall his telling me that, during his earlier years, when he would apply for various positions and come to a column asking for details about his religion, he would mark down ‘dissident,’ thus demonstrating his disinterest in any one faith.”

During an interview with Professor William Hermanns, Einstein once said that he could never accept any conceptualization of God that was based on fear, either fear of life or fear of death, or one that required a blind belief, totally removed from logic. Nor did he envision God in any personal sense. In that respect, he said that if he were to talk about a personal God, he would consider himself to be a liar.

“I cannot imagine a God who rewards and punishes the objects of his creation, whose purposes are modeled after our own – a God, in short, who is but a reflection of human frailty. Neither can I believe that the individual survives the death of his body, although feeble souls harbor such thoughts through fear or ridiculous egotism.” – “Religion and Science,” New York Times Magazine, Nov. 9, 1930

“I cannot conceive of a God who rewards and punishes his creatures, or has a will of the kind that we experience in ourselves.” – Ideas and Opinions

“A man’s ethical behavior should be based effectively on sympathy, education and social ties and needs; no religious basis is necessary. Man would indeed be in a poor way if he had to be restrained by fear of punishment and hope of reward after death.” – ibid.

“The man who is thoroughly convinced of the universal operation of the law of causation cannot for a moment entertain the idea of a being who interferes in the course of events…. He has no use for the religion of fear and equally little for social or moral religion.” – ibid.

“It was the experience of mystery – even if mixed with fear – that engendered religion.” – Living Philosophies, 1931

“The idea of a Being who interferes with the sequence of events in the world is absolutely impossible.” – quoted by E. H. Cotton in Has Science Discovered God? 1931

“During the youthful period of mankind’s spiritual evolution, human fantasy created gods in man’s own image, who, by the operations of their will were supposed to determine, or at any rate to influence, the phenomenal world…. The idea of God in the religions taught at present is a sublimation of that old conception of the gods. Its anthropomorphic character is shown, for instance, by the fact that men appeal to the Divine Being in prayers and plead for the fulfillment of their wishes. . . . In their struggle for the ethical good, teachers of religion must have the stature to give up the doctrine of a personal God, that is, give up that source of fear and hope which in the past placed such vast power in the hands of priests.” – remarks at a 1940 New York panel discussion, reported in Science, Philosophy and Religion: A Symposium, edited by L. Bryson and L. Finkelstein

“I do not believe in the God of theology who rewards good and punishes evil.” – quoted in a memoir by editor William Miller, Life, May 2, 1955

“I believe in mystery and, frankly, I sometimes face this mystery with great fear. In other words, I think that there are many things in the universe that we cannot perceive or penetrate, and that also we experience some of the most beautiful things in life only in a very primitive form. Only in relation to these mysteries do I consider myself to be a religious man. But I sense these things deeply. What I cannot understand is how there could possibly be a God who would reward or punish his subjects.” – interview with Peter Bucky, quoted in The Private Albert Einstein, p. 85

“Actually, my first religious training of any kind was in the Catholic catechism. A fluke, of course, only because the primary school that I first went to was a Catholic one. I was, as a matter of fact, the only Jewish child in the school. This actually worked to my advantage, since it made it easier for me to isolate myself from the rest of the class and find the comfort in solitude that I so cherished.” – ibid., p. 86

“There was religion, which is implanted into every child by way of the traditional education-machine. Thus I came – despite the fact that I was the son of entirely irreligious (Jewish) parents – to a deep religiosity, which, however, found an abrupt ending at the age of twelve. Through the reading of popular scientific books I soon reached the conviction that much in the stories of the Bible could not be true. The consequence was a positively fanatic freethinking, coupled with the impression that youth is intentionally being deceived by the state through lies; it was a crushing impression. Suspicion against every kind of authority grew out of this experience, a skeptical attitude toward the convictions which were alive in any specific social environment – an attitude which has never again left me.” – autobiographical notes written for Albert Einstein: Philosopher-Scientist, 1946

“It has not done so up to now.” – Einstein’s reply, after an interviewer asked him if religion will promote peace. – What Great Men Think of Religion, by Ira Cardiff

“Strange is our situation here on earth. Each of us comes for a short visit, not knowing why, yet sometimes seeming to divine a purpose. From the standpoint of daily life, however, there is one thing we do know: that man is here for the sake of other men – above all for those upon whose smiles and well-being our own happiness depends.” – The Best of Humanism, by Roger Greeley

July 3, 2020
Commonwealth, XLII: "There Is No Alternative"
Next Post