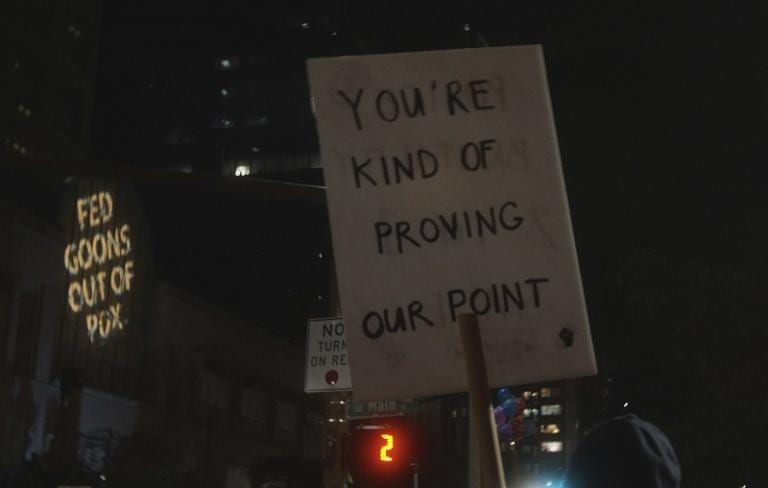 With the pandemic spreading out of control and the economy spiraling, we can expect Donald Trump to resort to ugly, desperate Hail Marys to manufacture a winning issue in the weeks before the election. In Portland, Oregon, the nation saw the first of these.

The Black Lives Matter protests that swept the nation haven’t gone away. But after several weeks of police riots and violence, the cops seemingly learned to show a little more restraint, and without the nightly clashes, they’d faded somewhat from the headlines.

We can guess that this situation was intolerable to Trump. In his most blatant appeal to racist voters yet, he wanted to style himself the president of “law and order”, defending white neighborhoods from scary gangs of roving black and brown thugs. The problem with this, as mentioned, is that the BLM protests have been overwhelmingly peaceful. There wasn’t enough attention-grabbing violence for his taste. So, like the reality-show host he is, he decided to create it himself.

The first sign of this escalation was squads of armed men in camouflage, leaping out of unmarked vans and snatching protesters off the street. Alarmingly, they refused to identify themselves, what agency they worked for, or on what authority they were arresting people – literal secret police. At least one person reported that he was immediately released when he invoked his constitutional rights.

After a few days, reporters obtained an internal memo: the secret police scooping up Portland citizens were a Department of Homeland Security task force made up of Border Patrol and ICE agents. It seems that they were chosen not because they had appropriate training or skills, but for their personal loyalty to Trump and another of his petty fascist underlings, the acting DHS Secretary Chad Wolf.

(It’s worth noting that these tactics only became headline-worthy when they were used against white people. Black communities have long faced similar oppression at the hands of undercover goon squads dubbed “jump-out boys“.)

The federal courthouse in Portland soon became a flashpoint for nightly conflicts between government forces and large crowds of demonstrators. As story after story showed, it was the government that consistently escalated the violence, blanketing crowds in tear gas and barraging them with flashbang grenades without provocation. At least one protester was shot in the head with a rubber bullet, fracturing his skull.

The governor of Oregon, Kate Brown, and the mayor of Portland, Ted Wheeler, protested that the city had been peaceful and that they neither requested nor wanted the federal presence, but they were ignored. The mayor was himself tear-gassed at one of the protests.

As we now know, the government escalation wasn’t just a byproduct of untrained federal attack dogs, it was the entire plan. Another leak provided the smoking gun:

One of the officials said the White House had long wanted to amplify strife in cities, encouraging DHS officials to talk about arrests of violent criminals in sanctuary cities and repeatedly urging ICE to disclose more details of raids than some in the agency were comfortable doing. “It was about getting viral online content,” one of the officials said.

Read it again: The purpose of Trump creating his own force of stormtroopers and unleashing violence against American citizens was to make campaign ads.

You may have wondered, as I did, why he chose Portland as the first test of this fascistic strategy. Despite its liberal leanings, the city is mostly white, and federal goon squads beating up white people wouldn’t seem to make for the kind of Fox-friendly propaganda clips Trump undoubtedly wanted.

The answer, as I learned in this column from Amanda Marcotte, is that in this as in other things, Trump is following the lead of white supremacists. They’ve long believed that Portland is rightfully “theirs,” a legacy of Oregon’s founding as a white supremacist utopia, and desire to reclaim it from the progressives who’ve come to dominate its politics.

Be that as it may, Trump’s thuggery didn’t deliver the victory he and his racist buddies were hoping for. In a backlash against the feds’ brutality, the crowds of protesters grew every night, reaching astonishing size:

The size of the crowd in Portland is on another level tonight.

Portlanders showed up night after night, putting their own bodies on the line in an awe-inspiring display of courage. They came prepared with homemade shields to deflect projectiles and leafblowers to disperse clouds of tear gas.

And the public recognized what Trump was attempting to do. Polls show that white suburban voters, by significant majorities, trust Joe Biden more on issues of crime and safety and say that the country will be less safe if Trump wins reelection.

Perhaps some of this bad polling penetrated the White House’s bubble, because after days of clashes and denunciations from local elected officials, the federal forces agreed to pull back from Portland. Unsurprisingly, the first night without their presence was quiet and peaceful, proving that they were the ones instigating the violence all along.

Still, I’m not reassured. Trump has now taken one of the biggest steps toward fascism, assembling his own force of brownshirts who take orders only from him and who are happy to use violence against American citizens. There’s no reason to believe we’ve seen the last of them. What’s to stop him from sending these paramilitary forces into swing states on Election Day to intimidate Democrats out of voting? What would we do if they close polling places or attack voters under the guise of fighting terrorism? And if Trump loses the election – or even if it’s close – how do we know whose side these men with guns would take?

August 7, 2020 Commonwealth, II.I: The Impossible City
Recent Comments
0 | Leave a Comment
Browse Our Archives
get the latest from
Daylight Atheism
Sign up for our newsletter
POPULAR AT PATHEOS Nonreligious
1