Come on, I have to gloat at least a little about this.

As you may recall, Jerry Falwell Jr. sent me a blustery legal threat back in April, because he was mad about news sites and blogs reporting on his resistance to closing Liberty University in the face of COVID-19. It was a baseless attempt at intimidation, and as I expected, nothing came of it.

Falwell displays the attitude typical of tinpot tyrants: puffed up on his own sense of self-importance, assuming he can dictate what others say and do. Since his position in life was handed to him by his father, you can also add a generous amount of nepotism and entitlement. As an atheist, I don’t believe in karma or divine justice; but purely as a matter of human relationships, of inspiring fear and resentment rather than love and loyalty, where that much pride goeth, you can expect a resounding fall.

But I have to admit I didn’t see this coming:

Liberty University President Jerry Falwell Jr., one of the most prominent and influential evangelical Christians in the US, is stepping back from the school after he posted a photo of himself with his pants unzipped and underwear showing, sparking backlash and calls for his resignation.

An executive committee for the Virginia university’s board of trustees requested that Falwell “take an indefinite leave of absence” on Friday from his roles as president and chancellor “to which he has agreed, effective immediately,” according to a statement released by the university.

The photo, which Falwell posted on his personal Instagram account, shows him on his yacht*. He’s dressed in a black T-shirt, rolled up to expose his bare stomach, and a pair of too-small black jeans, unzipped and unbuttoned, displaying a triangle of his underwear. In one hand, he’s holding a glass of dark liquid.

His other arm is wrapped around the torso of a smiling woman who’s wearing a crop top and cutoff short shorts, exposing her stomach and thighs. This woman is not his wife. (He later identified her as his wife’s assistant.) 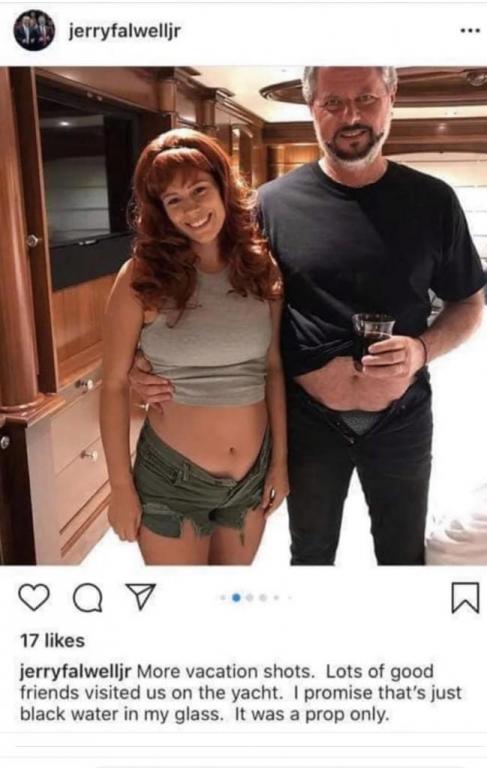 The caption that Falwell posted with the photo reads, “More vacation shots. Lots of good friends visited us on the yacht. I promise that’s just black water in my glass. It was a prop only.”

The overall attitude of the photo is rowdy, frattish, sexually charged. As numerous commenters pointed out, if a Liberty University student posted something like this, they’d likely be expelled for breaking campus rules that require “modest” dress and ban all physical contact between men and women other than holding hands.

This Christian site notes that Falwell and his lady friend’s outfits were cosplay of characters from a TV show called Trailer Park Boys, which it describes as:

…a raunchy and crass Canadian mockumentary TV Show that aired 106 episodes across 12 seasons. The theatrical film for the shows actors, Swearnet, set a world record for the most F-words in a feature film, totaling 935. The uncensored show has an 18+ rating in most countries and is known for the copious amounts of sex and, drug use, and cursing. At least three episodes have plotlines involving making homemade pornography.

But wait, there’s more. For the cherry on top of this layer cake of hypocrisy, Mrs. Betty Bowers, America’s Best Christian, saved this must-be-heard-to-believed audio segment in which Falwell, apparently intoxicated (on “black water”, no doubt), calls in to a talk radio show in his hometown of Lynchburg** to offer a slurring, stumbling apology. He promises “to be a good boy” from now on:

Here is the audio of a very drunk Jerry Falwell, Jr. calling into a *morning* radio show to explain (unintentionally) why he looked like a drunk, unzipped mess on his yacht. He had posted this photo on Instagram, which would have gotten a student kicked out of his own @LibertyU. pic.twitter.com/ouzZIZ5c07

This is the epitome of rules-are-for-the-little-people, do-as-I-say-not-as-I-do Elmer Gantryism. And I can guess why Falwell felt so comfortable loosening his belt and letting it all hang out (in both the literal and metaphorical senses).

Given the full-on evangelical embrace of Donald Trump – a man who’s been divorced multiple times, who treats greed and covetousness as a point of pride, who brags about sexually assaulting women and getting away with it, who scarcely even pretends to care about Christianity – I’m sure that Falwell thought that he could drop the pretense as well. Falwell’s behavior (and not just on this occasion, but on many others – the nightclub photos, the alleged bragging about his sex life, the pool boy, the other incriminating photos) is a frank admission that evangelical Christianity isn’t about faith or morals, but about power, impunity and what you can get away with.

But it appears Falwell found the line by tripping over it. At least for now, Donald Trump is still the only one who gets an exemption from all of Christianity’s rules while still carrying its banner.

After an outcry from evangelical pastors and Republican congressmen, Falwell deleted the photo. He stepped down from his roles as president and chancellor of Liberty University and agreed to an “indefinite leave of absence” from the school.

Whether this is permanent, or whether Falwell will slink back to Liberty once the hot glare of publicity fades, remains to be seen. Wealthy white men still get more second chances than anyone else, especially in a faith where they can offer some rote words of repentance and be forgiven. But whether he makes a comeback or not, we can enshrine him for all time in the halls of evangelical Christian hypocrisy. He’s one more example of the sanctimonious religious frauds who have no intention of living by the rules they try to force on everyone else.

* Of course he has a yacht.

** Named after the man who founded it, not as a reference to lynching – if you wondered as I did.

UPDATE (8/25): A few days after I posted this, a much bigger Falwell scandal broke wide open: Giancarlo Granda, who met the Falwells when he was working as their pool boy, said he was in a three-way sexual relationship with them:

Granda showed Reuters emails, text messages and other evidence that he says demonstrate the sexual nature of his relationship with the couple, who have been married since 1987. “Becki and I developed an intimate relationship and Jerry enjoyed watching from the corner of the room,” Granda said in an interview. Now 29, he described the liaisons as frequent – “multiple times per year” – and said the encounters took place at hotels in Miami and New York, and at the Falwells’ home in Virginia.

…The material Granda showed Reuters includes screenshots from what Granda said was a FaceTime conversation he had with the Falwells in 2019. During that call, Granda said, Becki was naked as the two discussed their relationship while Jerry peeked from behind a door. Reuters was able to verify Granda’s description of the screenshots.

Just before this story broke, Falwell tried to get ahead of it by publishing an editorial in the Trump-friendly Washington Examiner in which he threw his wife under the bus, asserting: “Becki had an inappropriate personal relationship with this person, something in which I was not involved — it was nonetheless very upsetting to learn about.” This is a blatant lie according to the evidence Granda presented.

Needless to say, the problem with this isn’t a consensual three-way relationship, nor is it Falwell’s apparent fetish for cuckolding – but the scathing hypocrisy of Falwell having these wild sex romps while threatening his students with punishment and expulsion for considerably tamer behavior, and lying about it and blaming his wife when he was caught out. 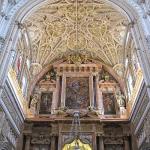