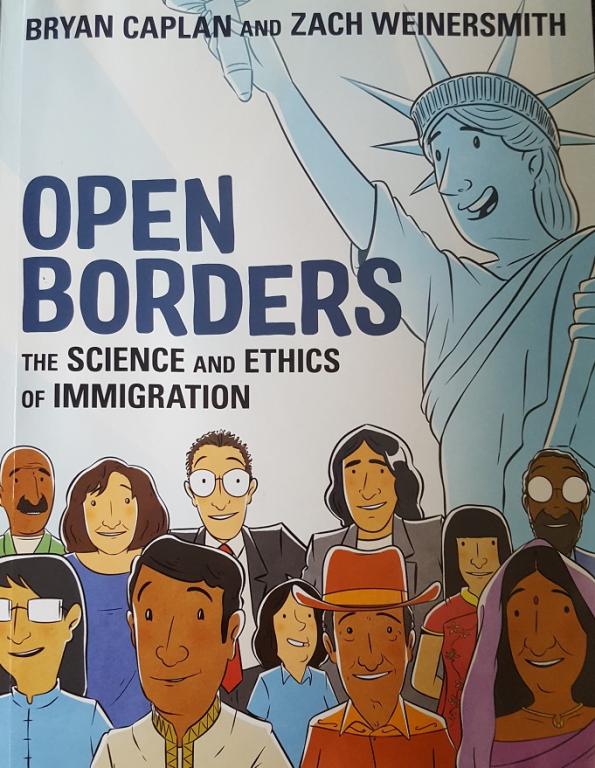 Summary: An optimistic, data-driven case that free movement isn’t just a human right but is beneficial to everyone.

Although extreme poverty is on the decline, there’s still immense poverty, suffering and privation in the world. Open Borders, by the economist Bryan Caplan, makes the case for one simple, sweeping change that would solve this. It’s a quick read, more of an extended essay than a book, and illustrated comic-book style by the cartoonist Zach Weinersmith. It’s a clever and colorful format that gives humor and visual heft to some of his arguments and analogies.

Caplan compares the current border system to global apartheid: a restrictive regime that dictates where people can and can’t go, just because of where they happened to be born. (The comparison is exact, since restrictions on movement were a major part of the South African apartheid system.) And we don’t have the excuse that our motives are purer than theirs. America’s borders were virtually open until the 1920s, and when they slammed shut, it was largely because of racism against the “inferior” people of southern and eastern Europe: 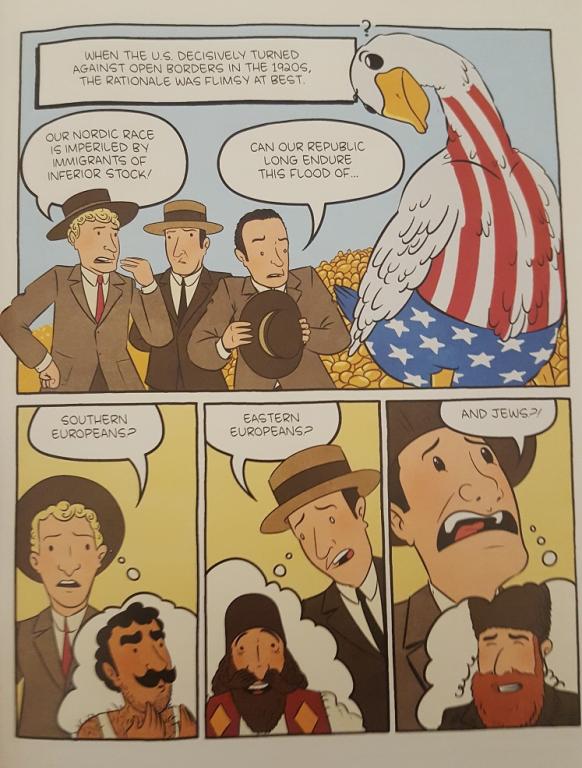 Today, people from Muslim countries are the villains du jour, but the xenophobic motivation is no different. These barriers prevent people from moving to where they could enjoy freer, more stable, more prosperous lives – not because of charity or social safety nets, but because they can earn a living by working. Caplan argues that this in and of itself is morally wrong, using a parable by the philosopher Michael Huemer: 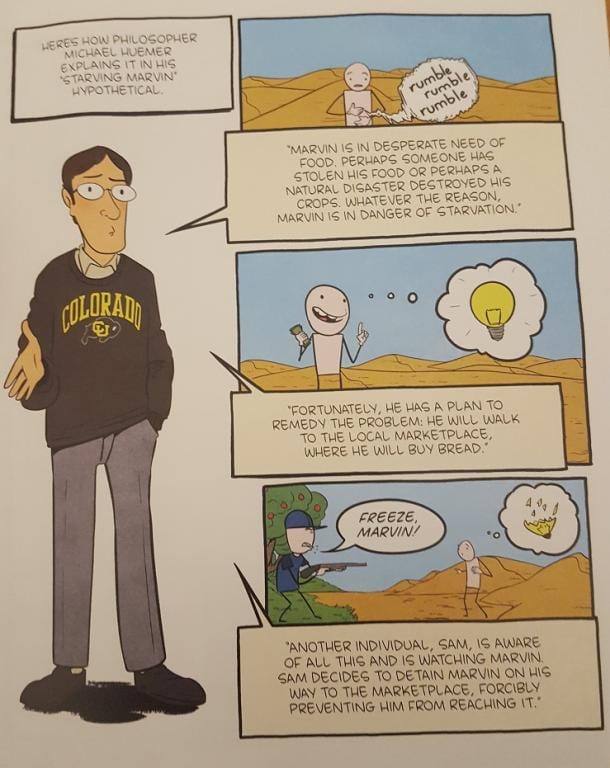 In an analogy, Caplan asks us to imagine a society of people living in Antarctica, struggling to scrape out a living from the frozen ground. If they moved to a temperate climate, they’d be able to grow far more food, not just improving their situation but producing a crop surplus which they could put back into the global economy, making food cheaper and more abundant. It’s in no one’s interest for neighboring countries to shut out the Antarctican refugees.

This is the situation that every potential immigrant faces. There are tens of millions of people whose talents go unused where they currently live. As with the Antarctican analogy, if they could all could move to other societies where culture and technology empower them to be more productive, the whole world would reap the benefits.

And the potential gains aren’t small. Using a straightforward assumption that when people emigrate to a country, their income converges on the average per capita income of that country, Caplan walks through calculations which conclude that instituting a global open-borders policy could double world GDP. In effect, it would make everyone on the planet twice as rich. And this immense benefit flows from one of the simplest policy changes imaginable. Caplan calls it “trillion-dollar bills lying on the sidewalk”.

In subsequent chapters, Caplan tackles the cultural objections to immigration. He deals with arguments like the one made by Sam Harris, that open borders would be a welcome mat to criminals, terrorists or Muslim fifth columnists who don’t value Western freedoms and will come here just to vote against them.

This is a silly objection to start with – because if theocracy is what you want, why not just stay in the countries that are theocracies already? – but also because it’s disproven by the evidence. Surveys show over and over that the political differences between immigrants and native-born citizens are miniscule. Nor do immigrants commit more crime. The book dissects the grossly racist “bowl of Skittles” argument that relies on innumeracy and ignorance about just how rare acts of terrorism actually are.

It debunks rampant myths and misinformation about how immigrants contribute to cultural fragmentation by refusing to assimilate or learn English. It’s true that most people who immigrate as adults wrestle with English fluency (because learning a new language as an adult is hard!) – but their children swiftly and easily absorb their new society’s language and culture. This is a pattern that’s repeatedly played out in successive waves of immigrants from Latin America and Asia. 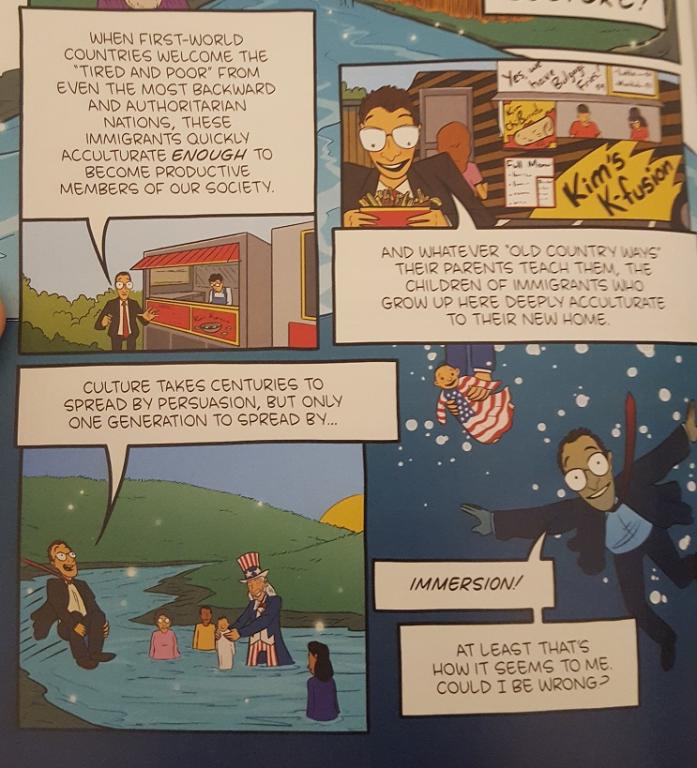 For those who still aren’t convinced, Caplan proposes “keyhole solutions” – narrowly tailored policies to address common objections, rather than the blunt instrument of immigration bans. For example, if citizens are worried that immigrants will consume more than their share of government services, he suggests that we could make them pay a fee to enter the U.S. which would go into the government’s coffers, or restrict their eligibility until they’ve lived and paid taxes in the country for several years. This is arguably unfair, but it’s less unfair than barring them altogether.

I liked the positive, upbeat tone of this book, and not just because it dovetails with my own thoughts on the issue. But if it has a flaw, it’s the presumption that opponents of immigration are acting in good faith and can be persuaded that more immigration is in their self-interest.

Caplan himself notes that immigration restrictions are frequently presented as a solution in search of a problem, although he shies away from the implication: their real motive isn’t rational, something that they’re willing to say out loud, but something darker and uglier. This kind of deep-rooted prejudice can’t be dispelled with statistics about GDP numbers.

However, there’s something to be said for shifting the Overton window. A book like this won’t convince dyed-in-the-wool nativists and white supremacists seeking their own ethnostate, but it may be persuasive for squishy liberals who are against travel bans but fear that fully open borders would be a bridge too far. If the case for open borders becomes better known, it will serve to anchor the debate, making smaller steps toward reform seem more feasible.