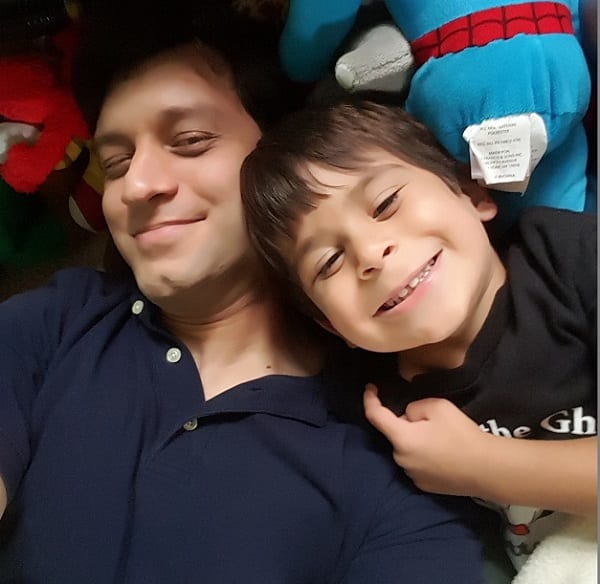 Written for my son’s fourth birthday

This has been a year of upheaval.

For us privileged Westerners who are accustomed to a stable and comfortable life, 2020 has shattered the ordinary and left us adrift. Every familiar routine has been disrupted, every certainty made uncertain. And no one has borne the brunt of these sudden changes quite like working parents.

Elizabeth and I only have one child, and we’re both fortunate to have flexible jobs with bosses who understood our situation – and still, these past few months of quarantine were extremely hard. Every day was like running a race, trying to juggle work, parenting, cooking, household chores, exercise, and yes, writing this blog. We tried to give each other as much space and time and grace as possible. Even so, we had snappish days and arguments, and tears and tantrums when my son wanted more attention than we were able to give him. I can only imagine what a nightmare this has been for parents with many children or workers in essential jobs that can’t be done from home.

Despite these difficulties, kids are marvelously resilient, and my son coped well – better than I was expecting, if I’ll be honest. It helped that the preschool he was attending kept going with virtual classes, which gave the day some structure and let him see some friendly faces.

I wonder how much of this time he’ll remember. My earliest memories are from when I was around his age, but it’s only a few vague and fragmentary recollections. I don’t have detailed memories until I was a little older than that. On the other hand, he’s so inquisitive and verbal that it’s hard for me to believe he won’t recall this later. He remembers things that happened several months ago; he can give specific details without prompting. It’s strange that all these memories may evaporate as he gets older. Just in case, this post and my previous one are my attempt at a time capsule.

Drop by drop, normality has been returning in New York City. The city playgrounds, closed for months, reopened in June. My son was thrilled to be able to swing and slide and climb again, and accepted the tradeoff of wearing a mask without complaint.

As daily cases subsided, we established a quarantine bubble and started to see close family again. At first, it was with trepidation – after so long a spell of isolation, just being in the room with someone else felt like a conspiracy – and then, as nothing bad happened, with increasing confidence.

In July, I attended a Black Lives Matter march in Queens. I got tested afterward, as a precaution, but the labs must have been swamped. I didn’t get results until well after they were of any use.

Late July and August were furnace-hot, an unrelenting string of 90-plus-degree days. The heat and the humidity were so miserable, the few outdoor attractions that had reopened weren’t appealing, so it felt as if quarantine had gone on for longer than it actually had.

In our neighborhood, coffee shops and restaurants have been reopening, converting sidewalks and parking lots into airy outdoor seating with benches and umbrellas and potted plants. It’s an innovation I like a lot; it makes the streets more convivial, a place for people rather than cars, and I hope it continues after this pandemic moment has passed. Frustratingly, the library is still closed.

Now, as fall sidles in and hot days yield to cool nights, classrooms in NYC are slated to reopen. My son is set to start pre-K this month, and I’m eager and anxious in equal measure. I’m not just looking forward to it for our sake – although I can’t deny that a little peace and quiet during the day would be nice – but for his. I want him to make friends, to be social, to have the normal childhood he deserves.

We could have opted for virtual school, but didn’t. We reasoned that for a four-year-old’s attention span, that’s barely better than no school at all. Sitting in front of a screen will never engage him the way a real classroom with flesh-and-blood teachers can. Most important, there are benefits to socialization: learning to share, to take turns, to play together with others, to be respectful and polite. Those are skills you can only learn by doing.

But the fearful part of my brain has no trouble conjuring scary scenarios to ruminate over. What if the schools reopen, cases surge, and they have to close again right away? Or what if the virus returns in a second wave as the weather gets cold? Are we exposing him and ourselves – and his teachers and classmates – to an unnecessary risk for an insufficient reward?

On the other hand, there’s evidence that prolonged isolation and loneliness can cause anxiety and depression in children. And it’s not just a passing spell of sadness: when inflicted on a developing young brain, this trauma can leave lingering emotional scars.

This drives home the point that complete safety is an illusion. There’s no such thing as a risk-free choice in life; there’s only the choice of which risks you want to take. That’s always been true, but it’s never been as vividly true as it is now, in this pandemic time. Coming to terms with vulnerability, and accepting that you can’t control everything however you might want to, is the hardest part of raising a child.

It’s possible there will be a vaccine by the end of the year, but it’s also possible that it will take years – or that there will never be one. Suspended in that uncertainty, and with a void of national leadership, everyone has to use their own judgment. This is the decision we’ve made as a family, and I hope it’s a defensible one. I wrote this essay because I want to memorialize it, to show my son when he’s older that we hoped and believed we did the right thing.

September 18, 2020 Commonwealth, II.VII: City of Gold
Recent Comments
0 | Leave a Comment
"The BIG concept here is that, thanks to scientific progress made in Australia, this "significantly ..."
vortexau Texas’ Libertarian Winter Nightmare
"SCIENCE WORKS!"
S. Arch To Mars With Perseverance
"What you'll probably see before that is humans whose metabolisms are altered through genetic engineering. ..."
(((J_Enigma32))) To Mars With Perseverance
"Not sure a digital reality is for everyone, but you could probably pull something similar ..."
(((J_Enigma32))) To Mars With Perseverance
Browse Our Archives
get the latest from
Daylight Atheism
Sign up for our newsletter
POPULAR AT PATHEOS Nonreligious
1