Pining for Monarchy: The Outlandish Worldview of Trad Catholics

The Roman Catholic church is bleeding members throughout the developed world, and they’re wrestling with what to do about it. Should they move with the times, adopting modern language and music and using social media, in a bid to meet younger people where they’re at? Or should they go to the other extreme, bringing back the medieval pomp and the dead languages, emphasizing antiquity and reverence for tradition, in the hope that this helps them stand out in a world that’s changing at bewildering speed?

Now there’s a group of Catholic apologists who not only argue for the latter approach, they claim that it’s already winning converts. Catholic doctoral student John Monaco writes:

More and more, Millennial Catholics are flocking en masse to more ‘traditional’ practices and devotions. Churches which offer Mass in the Extraordinary Form are being filled by young 20-somethings and 30-somethings. Chapel veils, once considered a sign of women’s oppression, are finding more and more support among the young. Religious orders and communities which use the Latin Mass are bursting at the seams with vocations. (source)

I would say that the Old Mass is “rigid” itself – and that’s a good thing. We, the younger generation, need some rigidity, surrounded as we are by weak systems of thought and “liquid societies”. If we perceive the Mass as something rigid, uncompromising and rigorous, it can be attractive. If it is just something social, then we have better social places to go. (source)

An article by Mary Meisenzahl in Mel Magazine has more information about these self-proclaimed traditional Catholics, or “trads”. Many of them reject Vatican II, the church council from the 1960s which allowed Mass to be performed in languages that parishioners actually speak, rather than mandating Latin-only (the so-called Tridentine Mass). Trad-Catholics see this as a disastrous compromise and believe the church will be revitalized if only it returns to the worship style of the Middle Ages.

None of the articles I read offer any actual data to back up the trad-Catholics’ anecdotes of rapid growth. If their numbers are growing, it’s not by enough to make a difference to the overall trend of decline, and of course this is the kind of propagandistic claim you’d expect them to put out whether it was true or not. However, it’s worth examining their views in more detail.

Trad-Catholics are motivated by more than just an aesthetic appreciation for Gregorian chants, Mass in Latin, and stained glass. Most are ultra-conservative in belief as well as style, embracing views so right-wing that they dropped off the edge of the Overton window decades ago.

It goes without saying that they’re fervently anti-gay, anti-choice and anti-divorce, and believe it’s a mortal sin for Catholics to vote Democrat. It’s also not surprising that they pine for a semi-mythical golden age of mandatory procreation, sexual shame, and women’s subordination. Facebook groups like “Reject Degeneracy, Embrace Tradition” post memes idolizing this lifestyle, depicting it as a white-bread utopia of manly men, happy housewives and rosy-cheeked Aryan children: 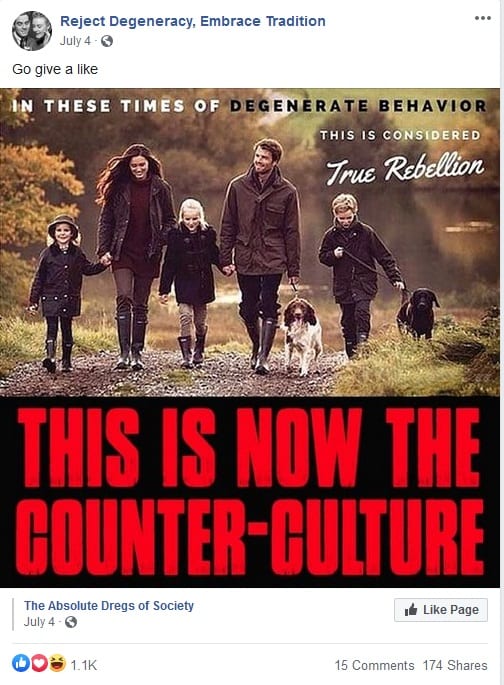 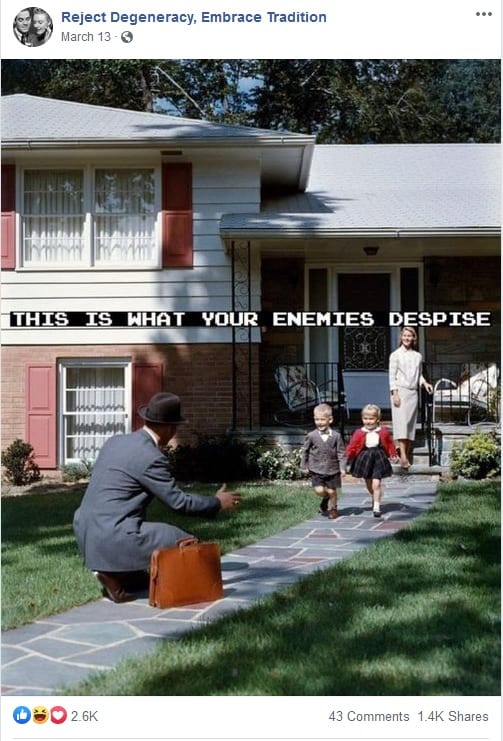 As you can tell from these images, they’re wedded to persecution narratives and desperately want to seem rebellious and counter-cultural. It’s likely that many trad-Catholic converts were alt-right first and foremost, and only came to the church because they like that it echoes their misogynist ideology.

The bone-deep sexism of this worldview is obvious even to other Catholics. In the National Catholic Reporter, Zita Ballinger Fletcher describes it as “a cult of toxic tradition“:

…the Latin tradition oppresses women. Women are expected — indeed, in some cases commanded — to wear skirts instead of trousers, cover themselves with long clothing and wear veils over their heads. No such rules exist for the men. It is discrimination, and therefore the Latin Mass actively endorses sexism. Instead of a unifying form of worship, the Latin Mass has become an instrument of oppression and a gathering point for Catholic fundamentalists.

As she points out, the trad-Catholic expectation for women to wear head-covering veils in church is identical to Islamic fundamentalism’s insistence on the niqab and the burqa:

They seem to believe that women look better in church when people can’t see them. They try to sell the veil to girls as a symbol of feminine piety. They hold that covering up and hiding yourself is beautiful although such a practice is the very opposite of natural beauty.

Ultimately, it doesn’t matter how pretty, lacy or colorful the veils may seem to potential wearers — the veils are meant to conceal female beauty and prevent people from noticing women. By promoting the veil, Latin Mass fundamentalists rob women of freedom, while trying to make it seem like a liberating choice. Their attitude is not much different from religious extremists in the Middle East and Asia.

A possibly more surprising fact is that many trad-Catholics are against women’s suffrage. Yes, you read that right. On the Traditional Catholic Millennials Facebook group, one post cheered Abby Johnson, a speaker at the RNC (yes, someone with these views was given a national platform by a major political party) who advocates “household voting” – i.e., one vote per household rather than one vote per person, or to put it more bluntly, married women would lose the right to vote.

And in Crisis magazine, a stronghold of the Catholic ultra-right, Michael Warren Davis says in all seriousness:

One hundred years later to the day, any sober and dispassionate mind must conclude that giving ladies the right to vote was the single greatest catastrophe in the history of our storied republic.

If you were curious, Davis describes himself as a Millennial convert to trad-Catholicism and says that he and people like him “want to escape the dreary prison of individuality” – a phrasing that George Orwell himself couldn’t have improved on.

But even this isn’t the bottom of the rabbit hole. There are trad-Catholics who aren’t just against votes for women, they’re against voting, period. They wish we could get rid of democracy and go back to the era of absolute monarchy and kings who claimed divine right to rule.

When asked whether monarchist sentiments could be found on campus, McGuire responded firmly: “Yes, absolutely.” Though still very much a minority view at Patrick Henry College, some traditionalist-minded students are open to the idea of a king. (source)

In retrospect, we should have seen this coming. It was foreshadowed by the Catholic apologist who, in the year 2018, defended the church’s decision to kidnap a baptized child from his Jewish parents. To be clear, it’s not just that one theologian wrote this, but that a prominent conservative religious journal thought it was a view deserving of publication.

Stories like this show that the religious right has given up on persuasion. As the churches shrink and younger generations become more secular, they’re turning back toward authoritarianism and theocracy. Recognizing that they’re losing the culture war, they pine for the days when they didn’t have to compete in a marketplace of ideas, when church hierarchs could simply issue decrees and force people to behave as they wished.

I don’t think trad-Catholics are poised to become a political force. They may boast, but their views are too offensive and outlandish to attract more than a tiny minority. However, as liberal and moderate believers head for the exits, I think viewpoints like these will become more influential within the church. As overall church membership dwindles, it will be the remaining hardcore believers whose voices are heard the loudest. This means that in the decades to come, the cultural chasm between organized religion and the rest of the world is only going to grow.

P.S.: Thanks to my wife, Elizabeth, for cluing me in to this topic! Check out her recent podcast interview with Kristin Du Mez, author of “Jesus and John Wayne”, for more about the influence of toxic white masculinity on Christian theology.