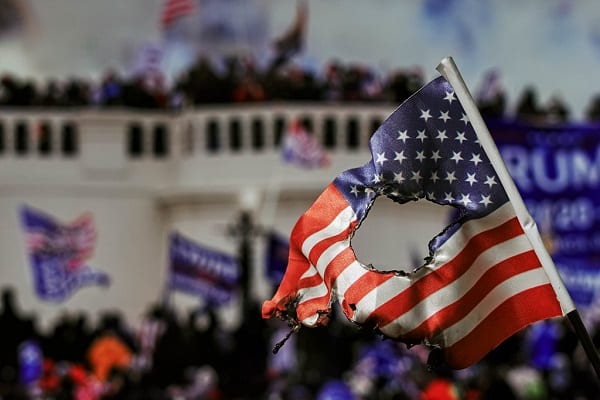 “What is the downside for humoring him for this little bit of time?”

—a “senior Republican official” quoted about Trump’s efforts to overturn the election, reported in the Washington Post on November 11, 2020

I woke up in the morning to the news that the Democrats had pulled off the seemingly impossible, winning both Senate seats in Georgia, claiming a majority and sweeping Congress. Trump scored a hat-trick of failure, becoming the first president since Herbert Hoover to lose the House, the Senate, and his own re-election.

January 6 was also the day Congress was set to count the Electoral College votes and certify Joe Biden’s victory. And despite some dead-end Republican opposition and the prospect of the right-wing “Jericho” protest, it seemed clear that the day would go off without a hitch… or so I thought.

Trump had previously invited his mob to D.C. for the day. From the stage, he riled them up with more lies about a stolen election and then instructed them to march on the Capitol, telling them to “show strength” and “fight like hell” and “demand that Congress do the right thing” – thinly-veiled instructions for mayhem.

The far right made no effort to hide their intentions, but the police were caught unprepared. At the heart of the American government’s power, at what should have been the most impregnable building on the planet, the preparation turned out to be so much security theater. Congress was guarded by just a small detachment of police – unarmored, unprepared, and outnumbered by the raging mob.

The optimistic (ha!) interpretation of these events is that they show the “invisible” threat of white Christian terrorism. Despite abundant evidence, the police simply don’t treat white conservatives as a threat; whereas if the mob assaulting the Capitol had been, say, a Black Lives Matter march, the army would have come in with helicopters, tanks and machine guns blazing. The more sinister interpretation is that the police were told, by Trump or someone in his orbit, to stand down to clear the way for an invasion.

But whatever the reason, the police were overwhelmed. After a few scuffles, the mob overpowered them and forced its way into the Capitol, battering down doors and smashing windows. Congress had barely any warning, and they adjourned in a near-panic.

Throughout the evacuation of the Capitol, there were many small acts of heroism: two Senate aides carried out the electoral certificates, like Dolly Madison rescuing portraits from the White House before the advancing British arrived. An incredibly brave Black policeman, Officer Eugene Goodman, risked his own life to lure the mob down the wrong hallway. His actions allowed the Senate to escape with seconds to spare.

For hours afterward, America witnessed the bizarre spectacle of unruly Trump cultists wandering freely through the halls of the Capitol. They ransacked Congress’ offices; they posed for selfies; they carried out the Speaker’s podium and put their muddy feet on Nancy Pelosi’s desk; they looted, they stole, they defiled. For all that Trump had incited them, they seemed to have no objective but to engage in childish vandalism.

Eventually, finally, the police regrouped and the National Guard arrived to assist. They restored order and cleared the mob out, and Congress reconvened and counted the electoral votes, just as we knew they would. Even then, the authorities were absurdly solicitous of the invaders. Rather than arresting them en masse, they ushered them out as if they were honored guests: holding one woman’s hand to help her down the steps, helping another one wash pepper spray out of his eyes. The comparison with the brutality that cops routinely unleash against peaceful Black Lives Matter protesters, let alone law-abiding people of color just going about their day, is inescapable.

When the smoke cleared, the human cost became apparent. A police officer was hit with a fire extinguisher and later died from his injuries; another one was dragged down and beaten by the crowd. One of the rioters was shot and killed while trying to break into a secure area, and several others died of medical emergencies.

But in the subsequent days, it’s become clear that we narrowly avoided something far worse. There were pipe bombs left at the DNC and RNC. One man was arrested when his car was found to contain weapons and Molotov cocktails. The crowd erected a gallows.

Most chilling, two of the Capitol invaders were photographed carrying plastic zip-tie handcuffs. It’s a reasonable inference that they were hoping to take members of Congress hostage.

According to reporters on the scene, some in the mob wanted to lynch Mike Pence (angry that he wouldn’t go along with the right-wing fantasy that he could unilaterally disregard the electoral votes and decree a second term for his boss). And if a bloodthirsty mob had murdered the vice president, we can be sure they wouldn’t have stopped there.

We’re very lucky that, aside from these few terrorists, neither Trump nor his mob had a real plan. Once again, their incompetence saved us from their evil. It’s no exaggeration to say that a competent fascist could have ended American democracy last Wednesday. What would have happened if Trump had ordered the federal authorities to stand down, and instructed his mob, “Bring your guns. Occupy the Capitol. Take Congress hostage and don’t let them go until they vote to reelect me”?

Although we avoided the worst-case scenario, we can’t ignore the magnitude of what happened last week. In plain language, what we witnessed was an insurrection against the rightful U.S. government. The president of the United States incited a terrorist mob to assault Congress, to harm or kill lawmakers and his own vice president, in the name of overturning a free and fair election which he lost.

The silver lining is that this insurrection is provoking a real backlash, more than any of Trump’s previous outrages have caused. There’s been an outcry for Pence and the Cabinet to invoke the 25th Amendment and remove Trump from office. Congress is voting to impeach him again, and with Republican lawmakers realizing they were in the line of fire, it may go farther than last time. If he’s convicted, he can be barred from holding office in the future.

Meanwhile, the insurrectionists, most of whom were so certain of impunity that they didn’t try to conceal their identities, are being fired or arrested (including the zip-tie guys). Major corporations have announced they’ll cease donations to Republicans who echoed the president’s lies and supported the overthrow of democracy. And Facebook and Twitter have banned Donald Trump, which has hamstrung him far more than any previous attempt to check his power.

But we can’t rest on our laurels. Trump is only president for a few more days, but he still has the powers of the office to abuse. And the right wing is frustrated, angry and out for blood. Almost half of Republican voters as a whole support the storming of the Capitol. Among the mob, there were police officers, members of the military, state legislators!

Even if the authorities are forewarned next time, even if Biden’s inauguration goes off without a hitch – even if Trump is removed from office and his enablers expelled from Congress – his cult of sedition and treason isn’t going away. He’s converted the Republican party into a mob of armed insurrectionists baying for blood. It’s likely this change will persist even if Trump himself dies or goes to prison or otherwise fizzles out, which means that the U.S. will be dealing with the threat of its own domestic terrorist insurgency for the foreseeable future.

Still, to counterbalance this fear, there’s reason for guarded optimism. I’ve been writing this Dystopia Journal series for four years, through the darkest days of Trump’s presidency, and in a few short days, that presidency is finally ending. Very soon, we can close the book on the Trump era. It feels like we’ve survived an endless arctic night, and we’ve seen the first glimmering of sun on the horizon.

For progressives, our work is by no means done. We have vast amounts of work ahead to repair the damage of the Trump presidency and restore our nation’s tattered reputation. There will be more dangers, and enormous challenges, and no doubt more times of darkness. But for the first time in a long time, we have something to set against that. The good guys won a resounding victory, and whatever lies ahead, that’s an achievement worth celebrating. 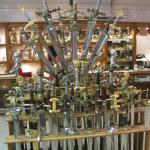 January 15, 2021 Commonwealth, II.XXIV: The Remainers
Recent Comments
0 | Leave a Comment
Browse Our Archives
get the latest from
Daylight Atheism
Sign up for our newsletter
POPULAR AT PATHEOS Nonreligious
1