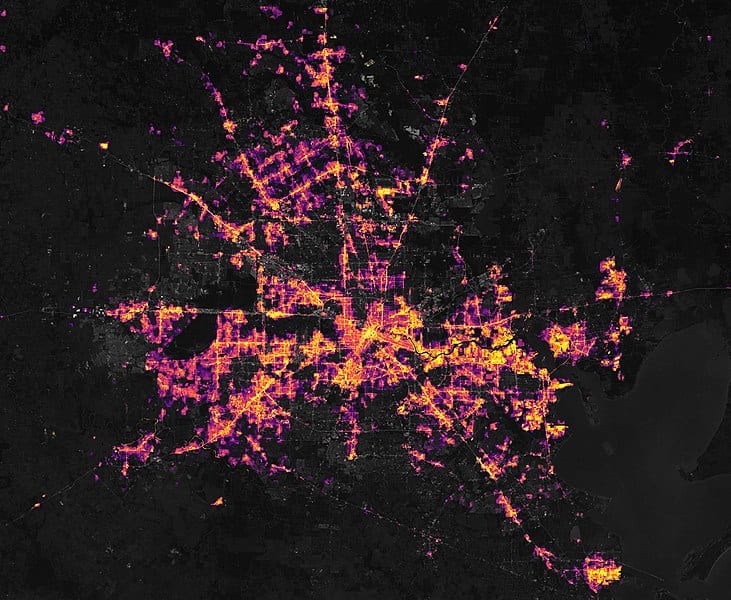 Last week, we witnessed a stunning spectacle: in the 21st century, in the richest nation on earth, an entire state was brought to its knees by cold weather.

The arctic blast that swept the U.S., bringing snow and freezing temperatures deep into the south, seemed at first like a punchline: Texas paralyzed by a few inches of snow! But it soon became clear this was far more serious.

Texas generates most of its electricity from natural gas, and gas wells and pipes can freeze and clog in extreme cold. With power generation plunging, Texas’ utilities failed catastrophically, and blackouts swept the state.

At the height of the storm, over four million Texans were in the dark, without water or heat, huddling under blankets in frigid homes, trapped by impassable icy roads. At least thirty people died, some who froze to death, others of carbon monoxide poisoning when they ran generators indoors to keep warm, others who burned to death when fires started for warmth got out of control.

Frozen pipes burst, producing surreal pictures of ceilings dripping with icicles. With water treatment plants knocked offline, cities advised residents to boil their water (how?) due to bacterial contamination. Food spoiled in useless fridges, and supermarkets were bare as people waited on huge lines for what food and bottled water they could get. Hospitals had to evacuate patients in the midst of a pandemic. All the while, the state’s government and elected officials were worthless, impotently waiting for the weather to warm up.

And let’s be clear: None of this had to happen. This wasn’t unforeseeable or outside our control; it wasn’t human civilization overwhelmed by unstoppable nature. It was, in every sense of the word, a man-made catastrophe. And it happened because of libertarian, free-market ideology run wild.

Start with this fact: Alone among the states, Texas has its own power grid, like an isolated island in the middle of the country. The reason is explicitly ideological. By building a grid that doesn’t cross state lines, Texas avoids federal regulation.

But this also means that in an emergency, it can’t import power from neighboring states. Some outlying regions, like El Paso, connect to the national grid instead of the state grid – and in El Paso, the lights stayed on.

In keeping with its laissez-faire ideology, Texas also doesn’t mandate that power plants prepare for extreme weather. Its regulations are more like gentle suggestions. An operator can be fined for not having a plan, but there are no requirements for what the plan has to say or whether they actually have to do anything to implement it.

They don’t even have the excuse that no one could have seen this coming, because this isn’t the first time that the cold brought Texas to its knees. Just ten years ago, a similar freeze caused similar blackouts, leaving 3 million people in the dark:

Almost exactly a decade ago, in February 2011, frigid temperatures caused some of the state’s key power infrastructure, including natural gas wells, to freeze up, cutting off a major source of electricity and heating for Texans.

…Not only did federal regulators identify that the state’s energy system was vulnerable to extreme cold, but even the state’s grid operator and several power suppliers all acknowledged the need for wells, pipelines, and power plants to be better protected from the low temperatures. But it’s clear that didn’t happen.

… “Generators and natural gas producers suffered severe losses of capacity despite having received accurate forecasts of the storm,” the federal report continued. “Entities in both categories report having winterization procedures in place. However, the poor performance of many of these generating units and wells suggests these procedures were either inadequate or were not adequately followed.”

And before that, there was a near-identical failure in 1989:

In the 1989 storm, wind chills reached 14 degrees below zero in Texas, forcing power plants to operate below capacity or fail to start altogether. And after that storm, as with the 2011 episode, regulators issued a slate of recommendations aimed at improving winterization.

“These recommendations were not mandatory, and over the course of time implementation lapsed,” FERC and NERC said in their 357-page report in 2011. “Many of the generators that experienced outages in 1989 failed again in 2011.”

This is a market failure that advocates of laissez-faire capitalism have to explain.

The free market is supposed to be an ideal problem-solver, allocating resources to the most profitable (and, therefore, best) use. Businesses which are competent and responsible are supposed to drive unscrupulous competitors to extinction. The result should be the best outcome for everyone.

But the dark, freezing wasteland that was Texas last week belies this claim. Obviously, it’s possible to winterize power plants so they don’t fail in the cold. So why was Texas caught unprepared for the third time in thirty years? Why didn’t the free market foresee this outcome and take steps to avert it? Why didn’t the profit incentive work?

The answer is that the grid didn’t fail in spite of deregulation, but because of it. Texas fell prey to the classic Prisoner’s Dilemma, the flaw that lurks at the heart of capitalism.

In a free market, every operator reasons thusly: To winterize my plant, I’d have to spend money, which means I’d have to charge more. If my customers’ bills go up, they’ll switch to a competitor that can undercut me because they didn’t make the same upgrades. And because everyone in the market reasons their way to the same conclusion, nothing changes. Only regulation which binds every participant can prevent this race to the bottom.

This is massively ironic, since libertarians and right-wingers have asserted that this kind of disaster only happens in over-regulated, centrally planned societies. In Atlas Shrugged, Ayn Rand wrote a passage that was meant as a dire portrait of socialism, but that could have been describing Texas last week:

The inhabitants of New York had never had to be aware of the weather. Storms had been only a nuisance that slowed the traffic and made puddles in the doorways of brightly lighted shops. Stepping against the wind, dressed in raincoats, furs and evening slippers, people had felt that a storm was an intruder within the city. Now, facing the gusts of snow that came sweeping down the narrow streets, people felt in dim terror that they were the temporary intruders and that the wind had the right-of-way.

For a modern example, here’s Ted “Cancun” Cruz bragging in 2019 about the “success” of Texas’ energy scheme:

Success of TX energy is no accident: it was built over many years on principles of free enterprise & low regulation w more jobs & opportunities as the constant goal. We work to export this recipe for success to more & more states so that all Americans enjoy the same prosperity. https://t.co/8wRLRWEVrN

Thankfully, the storm has passed. But Texas has only just begun to reckon with the damage. Houses where pipes burst are going to be unlivable for months – if water-damaged roofs don’t just cave in.

And many people are facing one final kick in the teeth, courtesy of capitalism: In Texas’ deregulated market, some energy providers charge wholesale prices – which spiked massively during the blackout. That means some people have been charged thousands of dollars for a few hours of power:

Robinson, a nursing student, tried to conserve power during the storm as much as she could with her 78-year-old father living with her after his bypass surgery. She and her husband, Doug Robinson, 42, used less energy in February than they did the prior month. Still, their bill, typically around $100 a month, was more than $6,500 in 17 days.

The toll of this disaster is immense. What’s worse, there’s reason to believe it’s going to happen again, and not just because climate change is disrupting the polar vortex and making severe winter storms more likely. It’s also because right-wingers are doing their utmost to learn nothing from it.

Texas Republicans are choosing to lie and gaslight the public, going on Fox News to blame all the problems on frozen wind turbines. (Some turbines iced up, but again, this is a problem of under-preparation: wind power works just fine in Antarctica.)

The only solution to this problem is regulation which requires all power plants to winterize, eliminating the Prisoner’s Dilemma that keeps them from acting individually. But this solution is anathema to conservatives. Rick Perry said that the blackout was a worthwhile tradeoff for avoiding federal regulation, which would otherwise oppress the state by preventing future blackouts.

In Texas, the free market was tried and found wanting. But because libertarians are ideologically committed to rejecting regulation, they can’t admit it. They have no way to prevent a disaster like this from happening, so all they can do is deflect responsibility and cast about for someone to blame.

Until now, red-state voters have been happy to swallow these lies and keep electing them. And it’s entirely possible that pattern will continue, that Republicans will pay no price for their failure and will go on to cause more and worse crises.

On the other hand, if Texas voters have a breaking point – if there’s any amount of suffering that will force them to see the failure of laissez-faire, that will make them fed up and willing to try an alternative – this could be it. This calamity could foretell more misery, but it could also be a rupture, a clean break with the past that brings about a better future – if people have the imagination to see it and the courage to grasp it.

Image: An infrared view of the blackout in Houston, February 16, 2021. Photo via NASA Earth Observatory.

February 26, 2021 Commonwealth, II.XXX: Seek the Garden
Recent Comments
0 | Leave a Comment
Browse Our Archives
get the latest from
Daylight Atheism
Sign up for our newsletter
POPULAR AT PATHEOS Nonreligious
1

Nonreligious
Why Won't Evangelicals Get the COVID Vaccine?
Daylight Atheism