“From an outsider’s perspective, it may seem incredible that the citizens of the United States submit to such squalid and degrading conditions, when a more equal, more humane society is well within their reach.

Part of the reason is that the decline in their living standards happened gradually, because of many different factors, rather than from a single clear cause which could be blamed. Experience has shown that most people will grumble but accept each successive change as the ‘new normal,’ never looking ahead to the logical endpoint. This tendency toward complacency is often analogized to a frog that will immediately jump out of hot water, but if placed in cold water which is slowly heated, will boil to death. (For the record, this folk wisdom is false: frogs do try to escape water when it grows uncomfortably hot. What does it say about humans that we seem less adept than frogs at reacting to dangerous changes in our environment?)

However, the most clever and insidious aspect of the American capitalist ideology is the way it serves as its own justification. By rewarding those who undermine each other, it fosters distrust and devotion to narrowly construed self-interest – the so-called ‘I got mine’ mindset – which keeps people isolated and disconnected, thus severing the networks of mutuality that give rise to collective resistance. Needless to say, the gruelingly long hours and chaotic, unpredictable work schedules demanded of nearly all employed people also play a part in breaking up social ties and community organizations that might otherwise become hubs of protest. (The racial-hierarchical aspects of this system, in which poorer white Americans have repeatedly been willing to accept reductions in their living standard as long as they can be assured of maintaining a position of relative advantage compared to those of Black or Latino heritage, should not be overlooked; see chapter 2.)

Moreover, by teaching that any problem can be overcome by individual effort, this system indoctrinates participants to blame themselves for any deficiency in their lives, rather than looking outward to those who engage in rent-seeking and in other ways design the rules for their own benefit.” 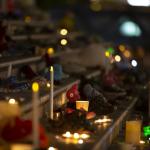 June 14, 2021 Majesty of the Mountains
Recent Comments
0 | Leave a Comment
Browse Our Archives
get the latest from
Daylight Atheism
Sign up for our newsletter
POPULAR AT PATHEOS Nonreligious
1