It’s Not Anti-Semitic to Criticize Israel 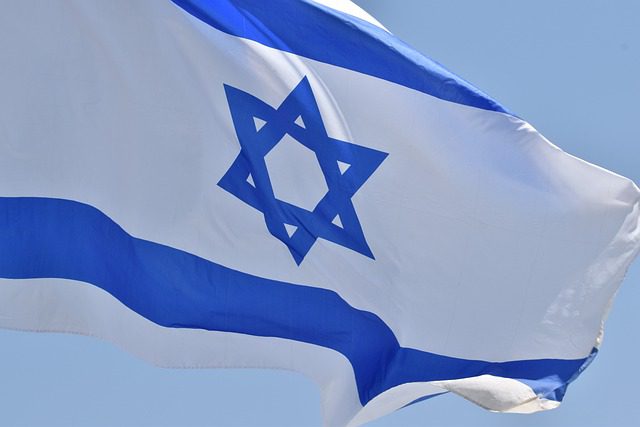 Judaism is both a religion and an ethnocultural group, both of which have existed for thousands of years. Israel is a parliamentary democratic state in the Middle East that’s existed since 1948.

Israel’s constitution proclaims it to be a Jewish state, but the converse is not true: not all Jews are Israelis, and Israel doesn’t represent all Jewish people. Even within Israel, there’s no unanimity about what policies the state should enact and how it should relate to its neighbors. Therefore, criticism of Israel’s current government is not an attack on Judaism or on Jewish people as a whole.

All this seems like it should be too obvious to need saying, but there are those who thrive on creating confusion. Let’s talk about some of them.

She’s picked up some plum endorsements, including Bernie Sanders and Alexandria Ocasio-Cortez. And, if you can judge someone by who their enemies are, she’s being attacked by mailings funded by Trump megadonor Stephen Ross: 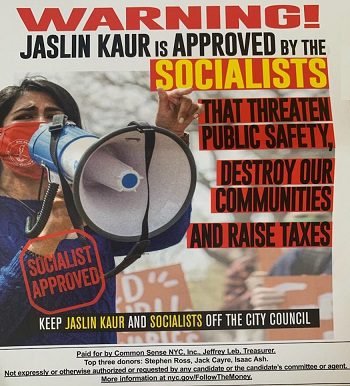 This kind of smear tactic is to be expected (although I wonder if “socialist” still has the sting they think it does, especially in a Democratic primary). However, to their shame, some Democrats are echoing these attacks. Here’s a tweet from a local politician:

@jaslinforqueens has been misleading the voters of CD23. She is not a friend of the Jewish community. Kaur signed the DSA, anti-semitic pledge of hate, supports defunding the police, and is opposed to the zoning that protects our residential neighborhoods.

Let me be as clear as possible: I’m Jewish – obviously not in the practicing, religious sense, but in the heritage and cultural sense. I’d be targeted under any criteria a neo-Nazi is likely to dream up, so this isn’t an abstract issue for me.

I’m the last one who would deny that anti-Semitism is a real problem. Whether it’s increasing numbers of assaults, vandalism and other bias crimes, or torch-wielding alt-right mobs chanting “Jews will not replace us!”, or popular Christian preachers who repackage medieval blood libels, it’s an ancient prejudice that’s still alive and potent.

But, precisely because anti-Semitism is a dangerous form of bigotry, calling someone an anti-Semite is a serious accusation and shouldn’t be made without strong evidence. That’s not what we have here.

This so-called “pledge of hate” was a candidate survey by the Democratic Socialists of America, which asked candidates whether they support the Boycott, Divestment & Sanctions (BDS) movement and whether they’ll turn down opportunities to travel to Israel. (I assume they were thinking of organizations like Birthright, which entice young Jews with a free vacation but use it as an opportunity to aggressively propagandize to them.)

Again: This has absolutely nothing to do with attacking Jews or Judaism! To accuse someone of anti-Semitism because they disagree with the policies of the state of Israel is a shabby and cynical tactic that cheapens valid accusations of prejudice. It’s the same slanderous lie that Donald Trump and the Republicans use: to criticize them in any way is to be unpatriotic, disloyal, anti-American. Actual anti-Semites love this, since it makes it easier for them to camouflage their bigotry and claim they’re only being persecuted over “political differences” with Judaism.

(For the record, Kaur got a rousing endorsement from a New York group, The Jewish Vote. Also, again, Bernie Sanders endorsed her campaign. Is anyone really going to accuse Bernie Sanders of being anti-Semitic?)

I don’t doubt that some criticism of Israel is motivated by prejudice, but a fair and unbiased assessment will recognize that Israel has absolutely committed actions that deserve condemnation. Its latest round of bombings, including the destruction of journalists’ headquarters in Gaza, is a dreary reiteration of the endless war I wrote about in 2009 and again in 2012.

As I said at the time, the roots of the Israeli-Palestinian conflict go back such a long way that it’s impossible to assign sole responsibility to anyone. Both sides proclaim their own supremacy and perpetuate hatred of the other rather than promoting peaceful coexistence. Both sides use the last atrocity committed against them to justify the next atrocity they commit. There’s more than enough blame to go around.

However, this isn’t a symmetric conflict. Israel is the more powerful party, which means it’s the one that could end this if it chose to. Israel could offer a fair and equitable solution tomorrow, either two-state or one-state. Instead, it’s created an apartheid regime which forces Palestinians to live in prison-like conditions under military occupation, under constant threat of being pushed out by Jewish settlers. This is a guaranteed way to keep stoking the flames of rage and to prolong the conflict indefinitely.

Does Israel have a right to exist? I say yes. That’s a straightforward application of my principle of land secularism: once you’re born on a piece of land, you have as much right to live there as anyone else. But that applies equally to the Palestinians, many of whom were born on land that Israel now claims!

The Jewish people have survived monstrous atrocities, and the whole world has a responsibility to preserve the memory of those events and to see that they’re never repeated. But that doesn’t mean that they have a free pass to inflict harm on others. It’s not anti-Semitic to insist that human rights are universal and that everyone, regardless of race or religion, has a moral obligation to respect them.