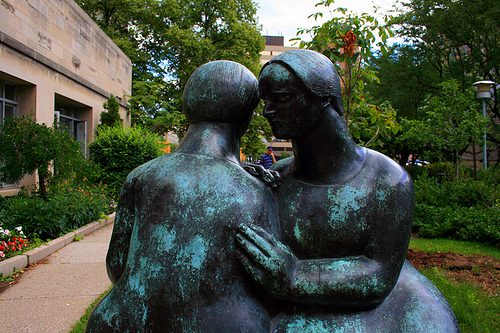 The best piece of moral wisdom in the Bible is the Golden Rule:

“As ye would that men should do to you, do ye also to them likewise.”

Of course, this principle isn’t unique to Christianity. It can be found across many religions and cultures. But where so many other moral ideas from the past have fallen by the wayside, this one has endured because of its universality, which steps across artificial boundaries of class, race, religion and gender (notwithstanding the sexist language of this translation). If you meet another person with the same feelings as you, you have a moral duty to them – period.

To live by the Golden Rule, you need a sense of empathy: the ability to put yourself in someone else’s shoes and imagine their state of mind. Empathy is essential to recognizing what another person is feeling and what they might want or need. And like the Golden Rule itself, empathy is inherently universal. When you see a fellow creature in pain, empathy naturally engenders a desire to help, whatever barriers might be in the way.

The universal nature of empathy and the Golden Rule make them a threat to worldviews that are based on exclusion, on dividing humanity into the elect and the unworthy. Since that’s a defining characteristic of the American religious right, it makes sense that they’d be suspicious of empathy, notwithstanding that this teaching comes straight from Jesus.

That brings me to a 2019 article by Joe Rigney, president of Bethlehem College and Seminary and pastor of a Minnesota church. Its title is “The Enticing Sin of Empathy: How Satan Corrupts Through Compassion“. It’s a telling look into the Trumpified mindset of American Christians and the ever-narrowing sphere of their moral concern.

Rigney’s article is an homage to The Screwtape Letters. It’s written from the viewpoint of a demon trying to trick a human being into sin by cultivating their empathy, which Rigney contrasts to the “true” Christian virtue of compassion:

Compassion only suffers with another person; empathy suffers in them. It’s a total immersion into the pain, sorrow, and suffering of the afflicted.

…Our alternative, empathy, shifts the focus from the sufferer’s good to the sufferer’s feelings, making them the measure of whether a person is truly “loved.” We teach the humans that unless they subordinate their feelings entirely to the misery, pain, sorrow, and even sin and unbelief of the afflicted, they are not loving them.

…To refuse to fully endorse the feelings of the hurting, however blasphemous and false, is to revictimize them. Maintaining the emotional independence necessary to rationally consider someone’s good is “unhelpful,” “heartless,” “contrary to the spirit of Jesus.” These terms can be used to browbeat your man into submission so that he never pauses to consider the true and lasting good of the one in pain, or the truthfulness and accuracy of their felt reality.

I’m skeptical of this etymological point that Rigney hangs so much weight on, the supposed difference between “suffering with” and “suffering in”. Be that as it may, his point is clear: it’s dangerous to empathize too much with someone who’s in pain. Instead, Christians should keep their distance and only render help consistent with that person’s “true and lasting good” (i.e., converting them to Christianity) and not fall into the trap of accepting the “accuracy of their felt reality” (i.e., any belief system that isn’t Christianity).

It’s not coincidental that evangelical Christians warn against excessive empathy, because the essence of religious-right politics is to set harsh rules for who’s in and who’s out, and harden themselves to the suffering of others. We’ve seen many manifestations of this attitude over the last few years.

They view refugees fleeing violence and chaos in their country, or migrants who just want to work to provide for their families, as “illegals” who need to be rounded up, imprisoned and deported. They cheered loudly for the intentional cruelty of the Trump administration’s family-separation policy.

They oppose reproductive choice because they can’t or won’t imagine themselves in the position of a woman facing an unwanted pregnancy, whose health is in danger or who’s stretched to the limit caring for the family she already has. They believe women are meant to be submissive helpmeets and can’t imagine that a woman might have other aspirations for her life.

They sneer at people of color demanding civil rights, because they can’t imagine what it’s like to grapple with everyday prejudice and police violence. They see the police as a force of justice and lawfulness, and can’t imagine that anyone else might have experiences that cause them to see things differently.

They despise the movement for LGBTQ rights and sexual freedom, because they can’t imagine what it’s like to love someone of the same gender, or how it feels not to fit into their societally assigned gender role. They believe everyone should fit into the same box and be content doing so.

As evidence that this is a more widespread view among Christian conservatives, here’s a very similar article from 2021 on the Gospel Coalition website by Kevin DeYoung, “What Does It Mean to Weep with Those Who Weep?”

Like Rigney, he argues that unbounded empathy is hazardous. He takes it upon himself to add some fine print to the Bible’s command in Romans 12:15:

“Weep with those who weep” is an important, biblical command. But it should not be taken as a one-size-fits-all formula that demands a rigid application in every situation where people are sad or distraught… In short, the verse must mean something like “weep with those who have good, biblical reason to be weeping.”

It’s not hard to guess that when Kevin DeYoung speaks of “good, biblical reasons” for sadness, he’s referring to people who share all his moral assumptions and political views. He thus closes the circle, transforming this verse from a radical teaching of compassion into a narrowly defined exclusionary command: sympathy should be reserved for conservative Christians only. He says this himself, arguing that “those who celebrate abortion or parade their sexual immorality” would be inappropriate recipients of sympathy, and that the verse is “fundamentally about maintaining the warmth and unity of Christian fellowship.”

This ingroup-only moral view served the religious right’s interests for a long time. It made them a force to be reckoned with in politics. But since COVID swept the globe, it’s rebounding on them in the most horrific way.

In 2019 and 2020, hundreds of thousands of people around the world were getting sick and dying. For most of us, that was all the incentive we needed to stay home, wear masks, and get vaccinated. We could see that suffering and we didn’t want to fall victim to it.

But the religious right has spent decades teaching its followers to eradicate their own sense of empathy, and so they didn’t react the same way. To them, all the headlines about overwhelmed doctors and nurses, jam-packed ICUs and overflowing morgues were just so much noise: distant and irrelevant at best, a liberal hoax at worst. By habit and inclination, they won’t believe a problem is real unless they’re personally suffering from it, so they shunned every precaution.

Now the virus is rolling over red states and counties in a devastating wave, killing religious conservatives in appalling numbers. Yet many of them continue to downplay it, even as they see friends and family members getting sick and dying. Often, it’s only when they end up in a hospital bed themselves, tethered to an oxygen mask with lungs failing, do they change their tune and cry, “COVID is no joke!”

In retrospect, this may have been inevitable. If right-wing fundamentalists could empathize with everyone, including people whose beliefs are different from their own… they wouldn’t be right-wing fundamentalists. Their worldview is premised upon rigidity, tribalism and a lack of concern for outsiders. It’s bad luck for them that the world has changed in such a way that this attitude is no longer conducive to survival.

We’re in the midst of a crisis where empathy and a sense of the collective good are vital, and right-wing evangelicals have excised those qualities from themselves just when they’re needed most. We tried to turn them aside before they reached this point: we tried to persuade them, we tried to warn them that they were headed for self-destruction. But now nature is calling the shots, and those who can’t adapt may perish.

October 2, 2021 Commonwealth, III.XVI: Angel of Fury
Recent Comments
0 | Leave a Comment
Browse Our Archives
get the latest updates from
Daylight Atheism
and the Patheos
Nonreligious
Channel
POPULAR AT PATHEOS Nonreligious
1