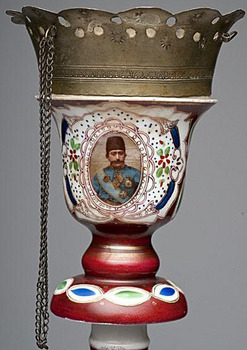 It would be nice to report that I begin every morning with a four-mile run, but it wouldn’t be true. Per immemorial custom, I begin it with a cigarette. Then I rifle my pockets for spare lira and stumble downstairs and across the street to the local convenience store for an ekmek, which I consume on the spot. Only then – girded by carbs and nicotine – do I haul myself, at a rate of seven miles per hour, give or take, to the Uludağ University campus and back.

I should mention that I’m in Turkey, having arrived March 28 for an indefinite stay. Ostensibly I’m here to teach English, but what really drew me here was love. No, nobody was picked out of a catalog. This is Pertev, brand-new catechumen, we’re talking about. She and I became Skype buddies a few months ago, and soon grew very fond of one another. Right around the time we started finishing each other’s sentences, we noticed neither of us was getting any younger. A TESOL certificate and a few fortuitous contacts later, I landed a job, and here I am.

One pesky detail: Pertev lives in the European part of Istanbul; I’m in Bursa, in Asia Minor. We two still haven’t figured out how to live on the same continent. The silver lining is in my getting to play the innocent abroad, to negotiate an alien culture armed solely with my wits. Granted, those wits don’t amount to much — I’m no Sir Richard Burton. Shucks, I’m not even a Tom Friedman. With my habits well fixed, my brain grown flabby, and my curiosity somewhat blunted, I’m not sure how well I’m capable of getting to know Turkey and the Turks. Yet honor demands I be something more than mere tourist. It is between these extremes – assimilation on one hand, frivolous voyeurism on the other – that running helps me steer a middle course.

We runners observe our surroundings by injecting ourselves, recklessly, into them. Through the shocks against our soles, shins, and knees, we experience the ground’s rise and fall and the pavement’s decay. Self-preservation forces us to absorb lessons about the habits of drivers and crowds. Working overtime, our lungs and noses hoard data on the quality of the air and the flowers in bloom. Whether we mean to be or not, all runners are gonzo journalists.

Here is what running, so far, has taught me about Turkey:

Turks are not especially used to runners. Or maybe it’s fairer to say that fitness freaks in general don’t command the same automatic deference in Turkey as in the United States. Even in the student neighborhood where I live, there are no special paths set aside for runners, cyclists, and in-line skaters. There seems to be no fixed etiquette governing runners’ relations with ordinary pedestrians.

Many times, when closing fast on a covey of students walking in line abreast, I’ve wanted to scream, “PASSING ON THE LEFT!” But, not having that much Turkish (or that much wind in me) I don’t. And it’s just as well, because it wouldn’t likely trigger any conditioned response. It is only at the last moment, when I am about to fall upon the students, that they turn around to see what might be pounding and wheezing in their ears. Then the student farthest left moves a few inches – sometimes simply by pulling in her arm. Squeezing past her, I catch a look demanding, “What in hell are you doing that for?”

Turks are normal-sized. It’s well known that America produces obese adults at a higher rate than any large country except Mexico. Maybe it’s because I live in a college town back home, or maybe I watch too much TV, but it also seems we’re near the head of the pack in turning out buffed human bulldozers. Getting vertical, the average American man stands five feet, nine-and-a-half inches; the average white American man, five feet, 10 inches. At five feet eight and 155 lbs, I’m stunted — vestigial, even. I hate it.

Turkey ain’t Japan – about as often as I did in the States, I find the crown of my head scraping some guy’s chin like a Gillette Super Speed. But most of the men look as slight as I am, or even a shade slighter. All things considered, I’d say I take up neither more space nor less than the average Turkish man. Better, most of the women, for a change, seem to have quit growing at slow-dancing height. I’m off the market, of course, and wouldn’t dance at any speed if Joe Pesci emptied his pistol at my feet. Still, there’s nothing like a little sexual dimorphism to make a guy feel less anxious about his future in the post-industrial world.

Digital technology has yet to conquer Turkey completely. On the street, Turkcell stores are about as ubiquitous as shops selling kebaps and künefe. Most of the students I meet and pass on my route must come from fairly prosperous backgrounds. Yet I see very few of them slipping down the drains of their Smart Phones. Old-school feature phones are another matter – fairly often I’ll see someone shouting into one, which he’s pressing to his ear with his own strong hand. But most common of all are people trading gossip with the folks next to them.

Girls in hijab have boyfriends and hold hands with them. I’ve even seen covered heads reclining on receptive shoulders and arms. Probably everyone in the world except me has known this forever, but this is my first peep into the enchanted gardens of the Near East, so don’t harsh on it.

In principle, none of these observations would be hidden from the foreign Metro passenger. But public transportation and pop anthropology don’t mix with me. I tend either to zone out completely or distract myself worrying whether I look like a potential mugger or flasher. On the other hand, like the prospect of being hanged in a fortnight, imminent danger of throwing up or passing out concentrates the mind.

February 8, 2014
Looking the Dead in the Face
Next Post

April 14, 2014 Turkey: Where Stray Cats Strut
Recent Comments
0 | Leave a Comment
"Saint Joseph of Cupertino.'Nuff said."
John Stevens My Real Career: Fool in Christ?
"He did too much at one time and for the first time. Although you are ..."
Sherry de Bosque The Devil I Know
"Learn more. This was about facing the immortal soul and it's relationship with good and ..."
Sherry de Bosque The Devil I Know
"It took me a minute. But I understand, exactly. I lived in Honduras during that ..."
Sherry de Bosque A Palm for Romero, A Finger ..."
Browse Our Archives
get the latest from
Catholic
Sign up for our newsletter
POPULAR AT PATHEOS Catholic
1

I Have Decided to Believe In...
Steel Magnificat
Related posts from Diary of a Wimpy Catholic

Catholic
Modesty for Men
Diary of a Wimpy Catholic

Catholic
The Witness of Larycia Hawkins: Too Much Solidarity,...
Diary of a Wimpy Catholic
TRENDING AT PATHEOS Catholic