The Family Research Council, which thinks that gay people should be in jail, is very unhappy with President Obama for making a video message for the It Gets Better project, which tries to provide a little encouragement to LGBT youth who are often the victims of much harassment and bullying. And they’re trying to use the issue to get their credulous and bigoted followers to send them lots of money, as Right Wing Watch reports. Here’s the fundraising message they’re sending out: 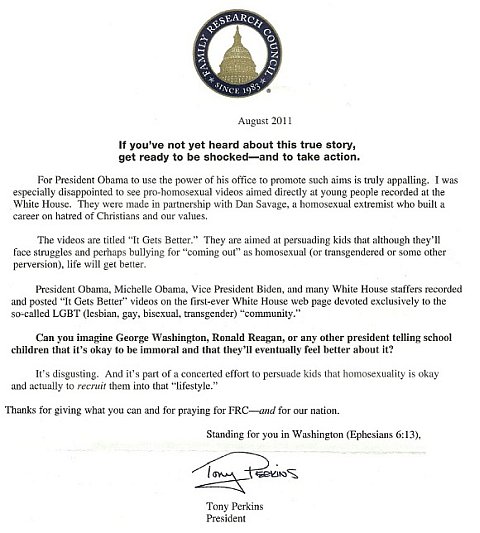 Here’s what’s really going on here. The FRC, like all anti-gay bigots, actually wants to make sure that the lives of gay people are as miserable as possible. They actually believe that people choose their sexuality the way they choose which car to buy. So they want that car to be a horrible experience to drive so that others won’t make the same choice. They find it “disgusting” to try to provide a little support and encouragement to kids who are often so tormented by their peers that they end up killing themselves because they think if those kids aren’t tormented and abused, other kids are more likely to buy the same car. And that, my friends, is what is truly disgusting.

August 23, 2011 Suit Filed Against South Bend Church Funding
Recent Comments
0 | Leave a Comment
""Ed not only didn't hate values, he consistently and laudably argued we should adhere to ..."
Jose Antonio Saying Goodbye for the Last Time
"A lot of brainwashing."
Atheisticus Yes, the Bible Does Say to ..."
"Because of all the prophecies that have never been fulfilled."
Atheisticus Yes, the Bible Does Say to ..."
"Although solar energy and solar panels have long been considered unknown technology for anyone. Greetings ..."
Anny Wiliams The Practical Path to Clean Energy
Browse Our Archives
get the latest from
Nonreligious
Sign up for our newsletter
POPULAR AT PATHEOS Nonreligious
1