Here’s an cartoon that, while clever, expresses a fundamental misunderstanding that is very common: 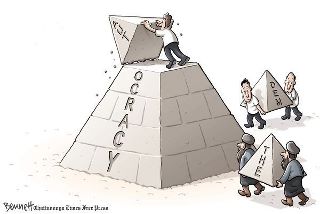 The problem is that this implies that democracy is somehow incompatible with autocracy and theocracy, but that simply isn’t true. Theocracy can be implemented as easily through democratic means as it can through dictatorial or monarchial means — perhaps more easily because the support of a majority of the people will give theocracy a legitimacy it would lack if imposed by a king or a dictator, if only in the minds of those who think democracy is synonymous with liberty (which seems to be far too many people).

That tyranny can be implemented democratically should be obvious, especially in this country. All of those laws that threw gay people in jail for centuries were passed by democratically elected legislatures. Same with laws against interracial marriage. And the same with all sorts of authoritarian laws passed by Congress all the time. Democracy provides very little protection against tyranny and sometimes even encourages it.

That’s the whole point of having a Bill of Rights that attempts to put individual liberty out of the reach of elected legislatures. And when democracy and liberty are in conflict, as they often are, it is liberty that should be the trump card.

October 20, 2011 Hey, It's an Atheist Song
Recent Comments
29 Comments | Leave a Comment
""Ed not only didn't hate values, he consistently and laudably argued we should adhere to ..."
Jose Antonio Saying Goodbye for the Last Time
"A lot of brainwashing."
Atheisticus Yes, the Bible Does Say to ..."
"Because of all the prophecies that have never been fulfilled."
Atheisticus Yes, the Bible Does Say to ..."
"Although solar energy and solar panels have long been considered unknown technology for anyone. Greetings ..."
Anny Wiliams The Practical Path to Clean Energy
Browse Our Archives
get the latest from
Nonreligious
Sign up for our newsletter
POPULAR AT PATHEOS Nonreligious
1