ThinkProgress links to a new study by Citizens for Tax Justice that shows four industries — financial; utilities, gas and electric; telecommunications; and oil, gas and pipelines — receive more than 50% of all tax subsidies. But pay particular attention to the real tax rate of those companies in this list: 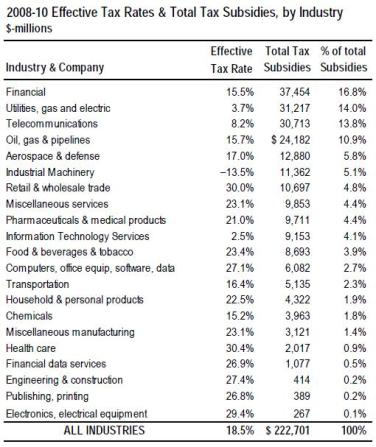 The average effective tax rate of those top four industries is 10.8%. So much for the idea that corporate taxes in the United States are the highest in the world and that this is what is keeping the economy down. In the 1950s, corporate taxes were over 30% of federal revenue. Last year they were less than 9%. Total federal taxes are lower as a percentage of GDP than they have been since the end of WW2 at 14.9% (the average is over 18%), and corporate taxes are only 1.8% — by far the lowest in the industrialized world.

November 21, 2011 You're Never Pure Enough
Recent Comments
9 Comments | Leave a Comment
"Hi ,for anyone wanting to follow the friendly atheist on Onlysky, it will go live ..."
david coxill Saying Goodbye for the Last Time
"Oh yes.. The privilege of being called names by people who have zero understanding what ..."
Standingbear Gallups: Satan Has Convinced Christians They ..."
"I wouldn't mind idiots saying "Black Lives Matter" IF They Meant it.Clearly that is not ..."
Standingbear Gallups: Satan Has Convinced Christians They ..."
"The ironic thing is.. Black lives Clearly do not matter.Why else would you ignore the ..."
Standingbear Gallups: Satan Has Convinced Christians They ..."
Browse Our Archives
get the latest from
Nonreligious
Sign up for our newsletter
POPULAR AT PATHEOS Nonreligious
1