The New York Times has an amazing graph that clearly disproves the notion that low corporate taxes and high corporate profits will create unprecedented economic growth and millions of new jobs. Corporate profits are at an all time high even while wages and business taxes have gone down and unemployment has soared. Here’s the graph: 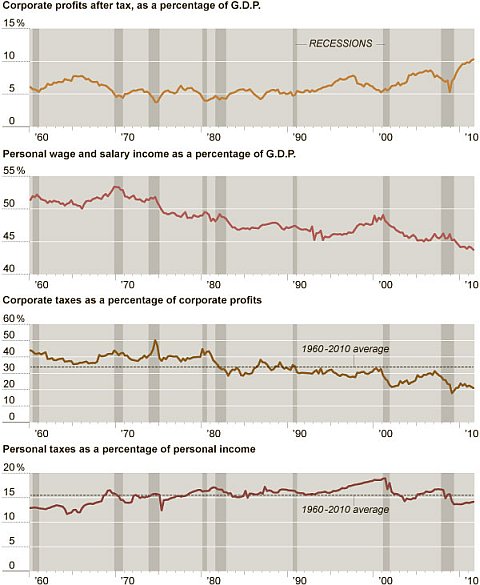 Corporate profits after taxes were estimated to be $1.56 trillion, at an annual rate, during the quarter, or 10.3 percent of the size of the economy, up from 10.1 percent in the second quarter. Until 2010, the government had never reported even a single quarter in which the corporate share was as high as 9 percent, as can be seen in the accompanying charts.

We are continually told by the right that lower corporate taxes will unleash an economic boom and solve the unemployment problem. Yet corporate profits have never been higher than they are now, and in fact they have nearly doubled in the last three years as we have suffered through the worst recession since the Great Depression. If there’s a connection between corporate profits and unemployment, it seems to be an inverse correlation.

Profit is not a bad thing. We should want companies to be profitable. A company that has no profits isn’t going to employ anyone, for obvious reasons. But even at a time of record profits, corporations continue to spend massive amounts of money to buy politicians to lower their taxes even further, even when their taxes are already at all time lows. And more than one Republican presidential candidate has suggested, quite seriously, that all corporate taxes should be eliminated. This is simply perverse.

November 29, 2011 Palin Worshipers Won't Give Up
Recent Comments
39 Comments | Leave a Comment
"To me it seems entorely logical that the penalty for stopping someone legally voting should ..."
Starlady Trump Admits Republicans Must Limit Voting ..."
"As you lack obviously the ability to understand plain English I was not being persona.Blocked"
Steampunk Gentleman Candida Moss on Evidence that Gospel ..."
"Then go back to the dollar store seminary you attended and pick up some text ..."
Steampunk Gentleman Candida Moss on Evidence that Gospel ..."
"I don't get it either. I have a smart friend back in Michigan who lukewarm ..."
GerrardOfTitanServer Copeland: Holy Spirit is Guiding ‘King’ ..."
Browse Our Archives
Follow Us!