Why the Cranston High Prayer Meant Nothing

Jon Stewart once joked that if you think posting the Ten Commandments in schools is going to keep teenagers from doing bad things, you probably also think that putting up a sign that says employees must wash hands is keeping the urine out of your cheeseburger. The bullying and harassment visited upon Jessica Ahlquist for filing the suit that took down the prayer mural at Cranston High School demonstrates this perfectly. Here’s what that banner actually said: 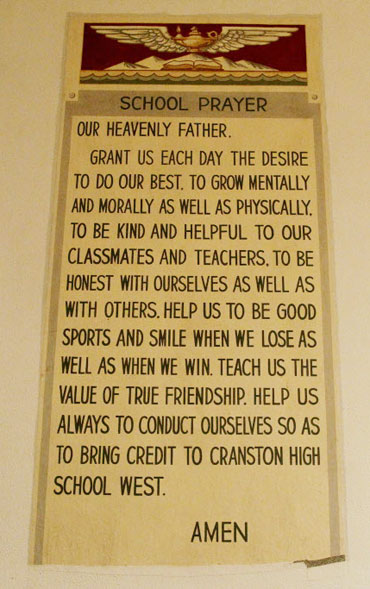 The people who are most vociferous in their defense of that prayer being posted are, ironically, the ones whose actions stand in the most stark contrast to its words. They have not grown mentally or morally, they have behaved in the most barbaric and appalling ways. Rather than being kind and helpful to a classmate, they have bullied, threatened and intimidated her and her family. They have substituted death threats and hatred for the “value of true friendship.” The prayer failed, and for no one has it failed more spectacularly than for those who are the most adamant about its importance.