If you listen to Republicans, you’d get the idea that the only reason why gas prices ever go up is because evil liberals and environmentalists prevent us from pumping more oil here in the United States. If we allowed drilling in ANWR or in more of the continental shelf, or approved the Keystone XL pipeline, gas prices would drop. Newt Gingrich claims that doing so would drop the price of gas to $2.50 a gallon, maybe even $1.20 a gallon. All of those claims are utter nonsense.

Sen. Jeff Bingaman, chairman of the Senate Energy Committee, made this argument a couple weeks ago on the Senate floor:

“As was made clear in a hearing we had in the Senate Energy Committee in January, the prices that we are paying for oil and the products refined from oil, such as gasoline, are set on the world market. They are relatively insensitive to what happens here in the United States with regards to production. Instead, the world price of oil and our gasoline prices are affected more by events beyond our control, such as instability in Libya last year or instability in Iran and concerns about oil supply in Iran this year…

“While domestic oil production plays an important role in the energy security and economy of our country, its contribution to the world oil balance is not sufficient to bring global oil prices down. And, for this reason, increased domestic production unfortunately will not bring down gasoline prices in our country.

“We also need to understand the status of domestic production. Here again, the facts are often misunderstood. For example, we have heard the claim that the United States and the Obama Administration have turned away from producing the domestic oil and gas resources that we possess. The facts are very much to the contrary.

“At the hearing we had in January in the Energy Committee, James Burkhard, a Managing Director of IHS/Cambridge Energy Research Associates, described our situation in this country as the ‘great revival’ of U.S. oil production. He provided this next graph, which clearly demonstrates what we are experiencing in the United States.

“This graph shows the net change in production of petroleum liquids in the United States and in other major oil producers between 2008 and 2011. The U.S. increase is this very large column here on the left. We can see that our oil increase was far greater than that of any other country in the world…

“Another chart on domestic oil production is also instructive. This shows total U.S. oil production between 2000 and 2011. It clearly demonstrates that current increases in oil production are reversing several years of decline in that production. We have not had to change any environmental laws or limit protections that apply to public lands in order to get these increases.

“This next chart shows the percentage of our liquid fuel consumption that is imported, including the projections that the Energy Information Administration has made out to 2020. The trend is very encouraging. In 2005, we imported almost 60 percent of the oil that we consume. Now we import about 49 percent of the oil that we consume. The Energy Information Administration projects that these imports will continue to decline to around 38 percent by 2020. This is an enormous improvement that we would not have thought possible, even a few years ago.

Here’s the first chart he referred to: 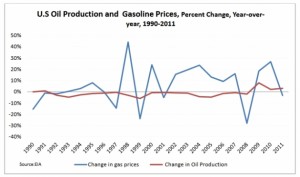 There’s no relationship at all between domestic oil production and gas prices. In fact, domestic oil production has gone up tremendously in the last 10 years even while gas prices have gone up. But American oil isn’t isolated in an American market, it is part of the global oil market. And globally, declining production from older oil fields and vastly increased demand from India and China means that demand is outstripping new supplies and pushing the price up. Add to that the instability in oil markets brought on by the saber-rattling with Iran and it’s pretty obvious why oil prices are so high.

And here’s something most Americans don’t know, and the Republicans certainly won’t tell them: The US is now a net exporter of fuel. Last year, we “exported more gasoline, diesel and other fuels than it imported in 2011 for the first time since 1949.” And that is the whole purpose of the Keystone XL pipeline. If they just wanted all that oil refined for the domestic market, there are refineries in the Midwest that could do that (and Keystone I, the first phase of the project, already takes huge amounts of tar sands oil there). They want the oil to go all the way to the Gulf Coast because those are ports from which the oil is exported.