With the Reason Rally yesterday in DC, and Rock Beyond Belief next weekend at Fort Bragg, Ed is on vacation.  So as I often do, I have offered to provide some content for Dispatches this week.  While I may have some one-off topics as the opportunity arises, I have a series planned on a topic that I have not discussed in the past: progressive libertarianism.

I first established an online presence back in July of 2001, when I joined the now-defunct Readerville community, a place for book lovers to congregate.  I ended up frequenting the political forum more than the book-specific forums, and there ran across my first libertarian, RML.  An American ex-pat living in the Netherlands, he stood out from the rest of the Readervillians, who were quite liberal as a rule.  While I often didn’t agree with him, some of his points resonated.  Although I ended up leaving the ‘Ville in early 2005 (in part because the proprietor was trying to emphasize the areas I didn’t use and downplay the ones I did use), shortly before I did leave someone linked the Political Compass test.  To my surprise, I tested just as strongly libertarian as liberal, both my scores being -4.92.

I gravitated to the political forums of my local rags, the Detroit News and Detroit Free Press.  One day, while in heated debate with Debbie Schlussel over gay rights and evolution, I stumbled across Pandas Thumb looking for the list of 300+ animal species that have homosexual members.  Note that this was in the wake of the 2004 Proposal 2, which banned same-sex marriage and, despite TMLC’s assurances to the contrary, barred any public entity from offering same-sex benefits.  I quickly realized I had found a new home.  And then some of my favorite bloggers joined ScienceBlogs, including one Ed Brayton.  I found that I agreed with Ed on politics most of the time, and he referred to himself as a libertarian, but of a different kind than the ones I’d seen before.  I started calling myself a small-l libertarian to distinguish myself from the whackos in the Libertarian Party; then a liberal libertarian.

As a result, I have spent much of the past six years thinking about how a principled liberal and libertarian viewpoint would look.  What positions should one take, how to create a coherent platform?  How is it different from a liberal, how is it identifiable as truly libertarian?  In short, what does it mean to be a liberal libertarian?  Over time, especially the past year, I have felt my position starting to solidify.  Here is where I stand now on the Political Compass: 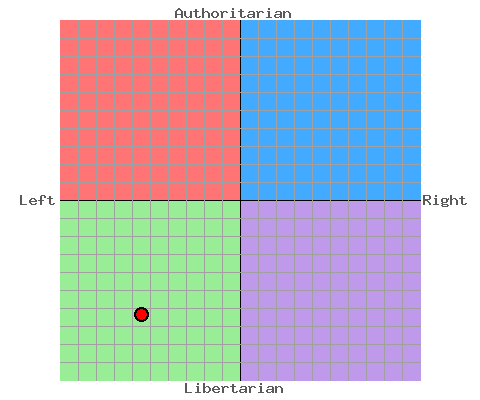 Then earlier this month, Ed posted about the Koch brothers attempt to take over the Cato Institute.  This seemed the perfect time to start the series.  Over the course of the series, I will describe the basic principles, and then apply them to specific, current examples.  While I am writing this series, I invite all of Ed’s readers to think about what it should mean to be a progressive libertarian, even if you aren’t one yourself.  One thing I’d like to emphasize, though: this series is about ought, not is.  I’m not going to be spending time debating how to get old Cato employees on board with my ideas, at least not at this time.  I’m focusing on the principle, not the practice.

Nonreligious
The Libertarian Fantasy World
Dispatches From the Culture Wars

Nonreligious
The Koch Lawsuit Against Cato
Dispatches From the Culture Wars