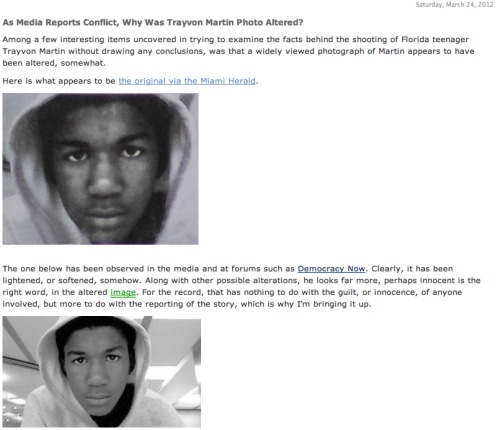 Leaving aside the fact that Riehl obviously equates darker skin with being “menacing,” Johnson debunks the conspiracy:

But in fact, this BOMBSHELL is yet another foot shot for the intellectually challenged Dan Riehl, because if you actually follow his own link to the article at the Miami Herald, and read the caption underneath the photo he claims is “the original,” you discover that it’s a photograph of a low resolution copy of the picture on a sign at a protest — not “the original” at all…

Riehl isn’t the only Breitbrat pushing this idiotic non-story; CNN contributor Dana Loesch is also raving about it on her radio show, in addition to making all kinds of other weird, racist claims.

And after having this pointed out to him, does Riehl offer a retraction or even update the post noting that his entire premise is false? Nope. He goes on Twitter and accuses Johnson (@Lizardoid on Twitter) of having STDs. Seriously.

RT @EricStrobel: @DanRiehl @larsoneric50 The only thing that explains how @Lizardoid has lost his mind so rapidly is untreated syphilus.

And then he doubles down:

Fact is, if @Lizardoid walked down the street I grew up on w his ponytail. The white kids and blacks kidz would’ve kicked his ass 2gether

This is what passes for thinking among wingnuts.

March 29, 2012 Rove Group Puts Out Dishonest Campaign Commercial
Recent Comments
24 Comments | Leave a Comment
""Ed not only didn't hate values, he consistently and laudably argued we should adhere to ..."
Jose Antonio Saying Goodbye for the Last Time
"A lot of brainwashing."
Atheisticus Yes, the Bible Does Say to ..."
"Because of all the prophecies that have never been fulfilled."
Atheisticus Yes, the Bible Does Say to ..."
"Although solar energy and solar panels have long been considered unknown technology for anyone. Greetings ..."
Anny Wiliams The Practical Path to Clean Energy
Browse Our Archives
get the latest from
Nonreligious
Sign up for our newsletter
POPULAR AT PATHEOS Nonreligious
1