Remember Andrew Shirvell, the bigoted former assistant attorney general here in Michigan who was fired after using state computers in his harassment campaign of Chris Armstrong, the openly gay student body president at the University of Michigan? A federal jury just ordered him to pay $4.5 million in a lawsuit filed by Armstrong.

A former state assistant attorney general will have to pay $4.5 million in damages after a federal jury ruled his blog attacking a University of Michigan student body president for his “radical homosexual agenda” went too far.

The blog – the “Chris Armstrong Watch” – was filled with posts made by Shirvell, including ones calling Armstrong, who was the first openly gay student body president at U-M, “Satan’s representative on the student assembly” and a “privileged pervert.”

The lawsuit alleged stalking, invasion of privacy and defamation. Most of what Shirvell said on his blog, while disgusting and vile, is protected speech. But he went further than just saying mean things. As the Detroit Free Press reported at the time he was fired by AG Mike Cox, himself a rather notorious anti-gay pol:

“To be clear, I refuse to fire anyone for exercising their First Amendment rights, regardless of how popular or unpopular their positions might be. However, Shirvell repeatedly violated office policies, engaged in borderline stalking behavior, and inappropriately used state resources, our investigation showed.”

Among the examples cited by Cox in the statement:

• Showed up at the home of a private citizen three times, including once at 1:30 a.m. That incident is especially telling because it clearly was about harassing Armstrong, not engaging in free speech.

• Further engaged in behavior that, while not perhaps sufficient to charge criminal stalking, was harassing, uninvited and showed a pattern that was in the everyday sense, stalking.

• Harassing Armstrong’s friends as they were socializing in Ann Arbor;

• Numerous calls to House Speaker Nancy Pelosi’s office, Armstrong’s employer, in an attempt to slander Armstrong – and ultimately attempting to cause Pelosi to fire Armstrong;

• Attempting to “out” Armstrong’s friends as homosexual – several of whom were not gay.

I’m sure he’ll appeal. Did I mentioned that Shirvell graduated from Ave Maria Law School? Amusingly, he was actually offered a settlement before the case went to trial. If he would have just apologized, the case would have been dropped. He refused. He also represented himself and did such a bad job of it that he was reprimanded by the judge for filing too many frivolous motions. Watch out, Larry Klayman; you’ve got competition. 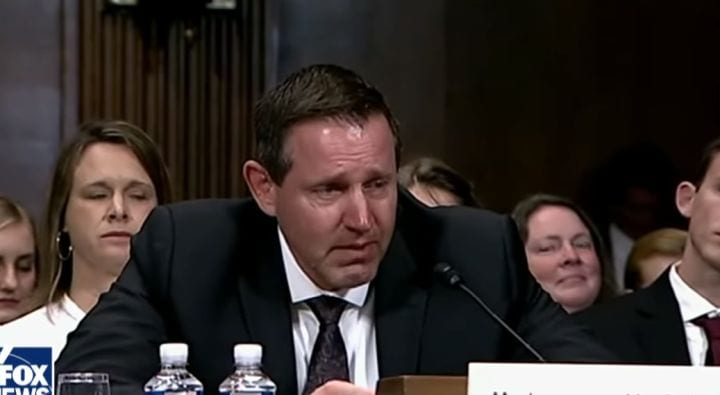