The Practical Path to Clean Energy

I found this picture on Facebook and it got me thinking about all the ways that this country could get serious about cutting down on the use of fossil fuels and speed the transition to clean, renewable energy production. This is a brilliant idea: 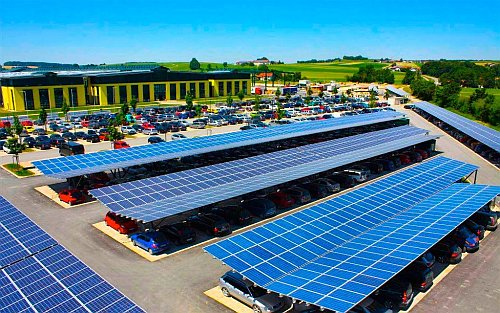 I’ve long wondered why every building in Las Vegas isn’t covered in solar panels or solar film. In that environment, even with the massive energy consumption, a significant percentage of their electricity could be generated that way. They’re just now starting to explore the ways they can use their abundant sunlight to power the city. For instance, they’re building a new solar farm outside of town, but it will only generate about 6 million kilowatts per year. There’s also a solar tower being built out in the desert, which is expected to produce 110 megawatts of power by next year. And the local schools are installing solar panels on the roof to supply part of their energy needs. But there’s much more that could be done, obviously. The City Center project has received LEED Gold Certifications for several of its buildings, and that’s a good start. But why hasn’t MGM Mirage or Steve Wynn built a hotel/casino that is covered in solar film so that a sizable portion of its energy needs are supplied with this clean and renewable resource? Once the first one does it, the rest will likely follow — if for no other reason, then because it will cut their massive electricity bills and reduce their operating costs.

Why aren’t we requiring all new homes to have either solar panels or small windmills on them, depending on the local environment? Yes, it makes building a house more expensive, but that can be offset by tax credits or subsidies. The same should be true of office buildings and factories, which can generate a lot of solar and wind power by designing their buildings correctly. How about we take the $4 billion a year we’re currently giving to the big oil companies — at a time when they’re making higher profits than any companies in the history of the world — and use it instead to subsidize practical solutions like the ones above?

Germany has taken the lead in solar power generation, producing 3% of its total electricity needs that way, with estimates that it could grow to 25% by 2050. And since the passage of a law that subsidizes solar energy, the cost of their photovoltaic systems has dropped in half. The same can be done here. And there are a thousand small, practical steps that could be taken to make that transition a reality. It would be good for the economy and good for the environment.

August 31, 2012
Gay Event to Blame for Another Hurricane
Next Post