Hemant Mehta reports on a very typical situation in Kountze, Texas, where before high school football games the team has long been crashing through a banner with Bible verses on it. Someone complained about it and the school administration told them they can’t do it anymore. That has predictably resulted in thousands of people rallying against what they view as a tyrannical attempt to crush their religious liberty. Here’s one of the banners: 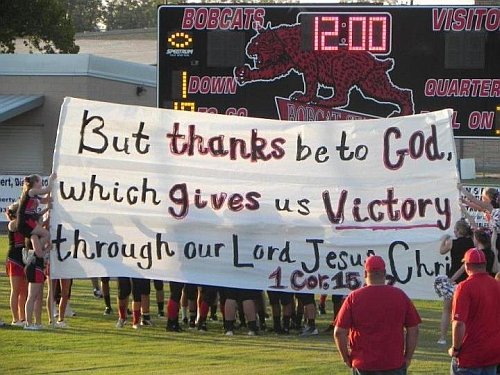 A Facebook group has grown to over 30,000 members in only a couple days and it’s full of the kind of thing you’d expect it to be full of. The page says:

Our little town is sticking together and standing behind our kids!!! Someone has tried to prevent our cheerleaders from using religious scriptures on their run-through signs at the football games. This was all led by our children, and they made the decision to give the glory to God this year. We, as a community, will stand up for our kids and make sure they do not lose their voice and their rights in this. We have a group of parents who are not only outraged, but have decided to make a huge statement for our kids! We need all the support we can get for our kids in our little town!

It’s all being framed exactly the way you’d expect — horrible ACLU liberals, atheists and satanists bullying a little town full of Real Americanstm who just want the freedom to declare their faith in God. Of course, they already have that freedom. As Hemant points out, in another town where the same thing happened, people started bringing their own signs with Bible verses on them to the games and held them up in the stands; they have every right to do so.

The commenters on the Facebook group are acting like they’re martyrs in a struggle worthy of an awful Kirk Cameron movie. They’re not. They’re just Christians who think it’s their duty to push their faith everywhere they go and who don’t care one bit about how the Muslims and Jews and atheists and other non-Christians in their community might feel.

If they don’t put a stop to it themselves and take the high road, then a judge will do it for them.

And that, of course, will just feed their martyr complex even more. Hemant suggests that they might recognize the problem if a group of cheerleaders held up a banner that said “There’s probably no god. Now stop worrying and play the game.” A more apt example would be this. Imagine a majority Muslim community like Dearborn, Michigan had a similar situation, with the cheerleaders holding up a sign with a verse from the Quran and thanking Allah. All of these arguments about religious liberty would disappear in an instant.

Civil libertarians like me would be consistent; we’d be opposed to it in both situations. But the people who are screaming about how persecuted they are in this situation would be cheering us on when we filed a suit against the Dearborn school for doing the same thing they’re now defending. Because this isn’t about religious liberty, it’s about Christian hegemony.