A nutty professor from Florida Atlantic University who has apparently never seen a conspiracy theory he didn’t swallow whole says that the Newtown shootings may never have happened, instead being staged — you know, like the moon landing — by the government and the media.

A media professor at Florida Atlantic University who is questioning the Sandy Hook massacre has caused controversy with his conspiracy claims.

James Tracy, who writes a personal blog about conspiracy theories, believes the events that unfolded at Sandy Hook did not happen as reported.

The professor writes on his blog, Memory Hole, “While it sounds like an outrageous claim, one is left to inquire whether the Sandy Hook shooting ever took place—at least in the way law enforcement authorities and the nation’s news media have described.” He suggests that there were multiple shooters and that the number of dead is incorrect. The blog post was published on the Global Research site, where it caught the attention of the Web.

The academic, who is known for his conspiracy theories on 9/11 and the Oklahoma bombing, believes—as he claims on his blog and recently stated on a radio show—that trained “crisis actors” may have been employed by the Obama administration to shape public opinion on gun control.

But the best part of the story is this comment, which one of my friends spotted: 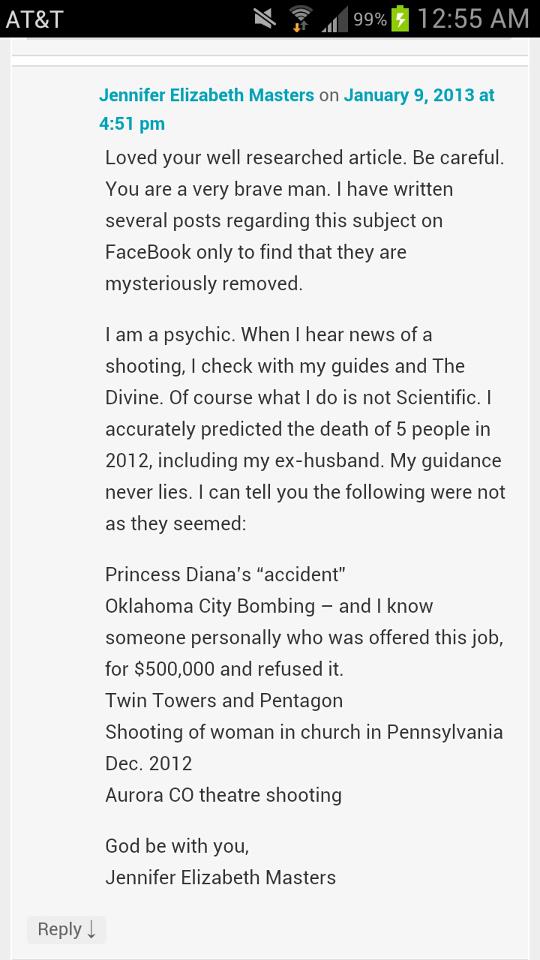 January 14, 2013 Ohio School Refuses to Remove Picture of Jesus
Recent Comments
29 Comments | Leave a Comment
Browse Our Archives
get the latest from
Nonreligious
Sign up for our newsletter
POPULAR AT PATHEOS Nonreligious
1