On Tuesday, the voters in North Miami went to the polls to elect a new mayor. One of the six candidates for that office is Anna Pierre, who is — to put it mildly — batshit crazy. A month ago she claimed that her opponents were using voodoo against her. But that’s okay, because she has Jesus on her side. This is a flier her campaign has released: 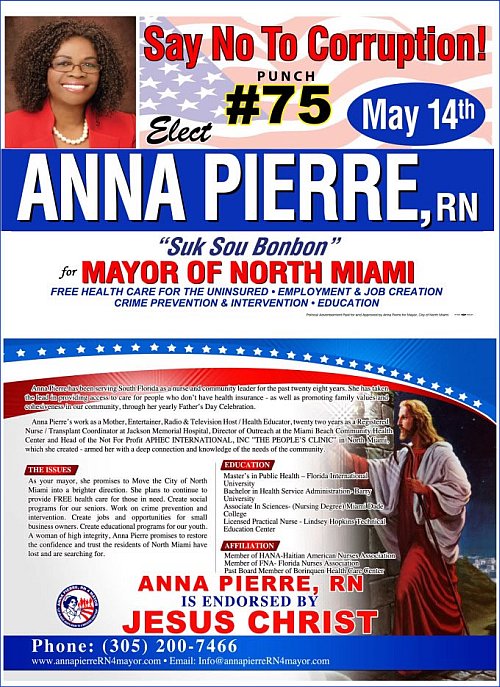 She also calls herself Princess Anna Pierre. And it appears that Jesus’ endorsement didn’t mean much. She finished dead last out of 7 candidates. She got a total of 56 votes.

May 19, 2013 Principal Still Punishing Katelyn Campbell
Recent Comments
22 Comments | Leave a Comment
"The Qur'an demands nothing of the sort, which you would know if you had any ..."
Wulf Nesthead Disagreeing with Seth Andrews: Islamophobia is ..."
"Health insurance is really vital."
Dr. Robert Boehland Study: 45,000 Deaths Per Year Due ..."
"If you are fond of programming, then I would like to advise you an excellent ..."
Alex Clark A Modern Day Plato?
"March Madness again....and missing Ed's basketball love and wisdom...... :-("
ChzBoi Saying Goodbye for the Last Time
Browse Our Archives
Related posts from Dispatches From the Culture Wars