Barton Rewords Some of His Lies

Warren Throckmorton notes that David Barton has been quietly changing the audio on a Youtube video that shows him taking people on a tour of the capitol and delivering his usual litany of lies and half-truths about America being a Christian nation. He’s changed a whole bunch of his statements in the original video, usually weakening them so they’re not quite so dishonest.

One example: He has long claimed that 29 out of the 56 signers of the Declaration of Independence had seminary degrees. But he was counting any of them who went to a school that was founded as a seminary, as most schools then were, even if they got an entirely unrelated degree. Many of them, for example, had studied law at Harvard or Yale, which had been founded as seminaries. He’s now changed the language to say that those 29 men had degrees from schools that were started to train ministers. That’s more accurate, but still entirely irrelevant. Barack Obama went to Harvard, too; would it be in any way relevant to point out that he has a degree from a school that was started to train ministers? Would it be even remotely germane to his views on anything? Of course not. So while he’s gone from a flat out lie to a true statement, it’s still completely superfluous.

Here’s a chart of some of the changes: 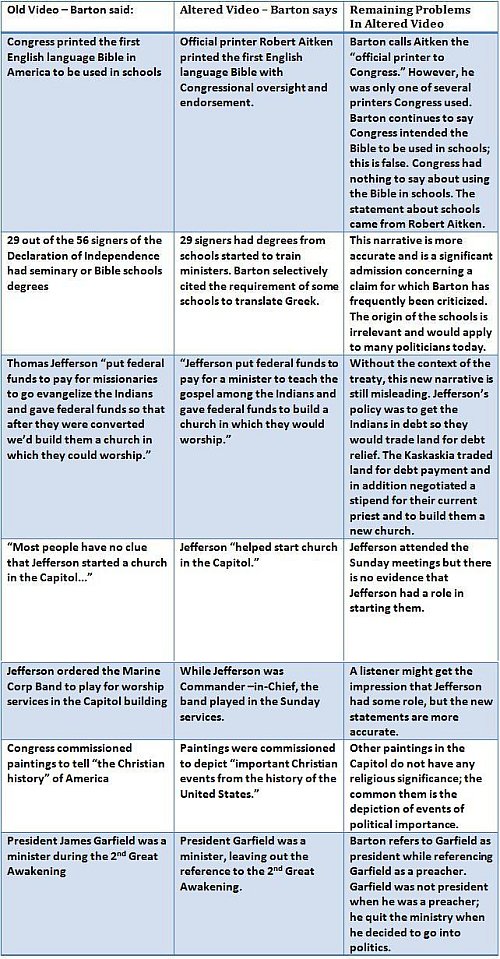 You can see the changes in the two youtube clips below. The first one is the old one:

And the new one:

June 25, 2013 I Think We've Heard This Before
Recent Comments
12 Comments | Leave a Comment
Browse Our Archives
get the latest from
Nonreligious
Sign up for our newsletter
POPULAR AT PATHEOS Nonreligious
1