Those clever wingnuts at the Worldnetdaily have once again cracked the case and caught Obama sending secret messages to the Muslim hordes massing on the Mexican border to overrun the country. First it was his wedding ring with its secret Muslim symbols, now it’s…the soles of his feet. But Andrea Shea King isn’t going to let him get away with it.

How many of our fellow countrymen thought the same thing when viewing this official White House photo (by Pete Souza) of the president with his shod foot firmly planted upon an historic American treasure – the Resolute Desk in the Oval Office?…

Is it possible I might have misinterpreted this photo, which played prominently on the Drudge Report site last Sunday? Is it possible President Obama had a White House photographer release this official image to the world to send a wordless message of support to the Muslim Brotherhood, Arab street and Islamic community in general? To convey his disdain and disregard for all things traditionally American? It is, after all, common knowledge that the Arab world considers the bottom of one’s shoes the ultimate sign of disrespect.

It also wouldn’t be the first time Obama has used photos to convey a not so subtle message to his intended audiences.

Twitchy gathered comments from others on Twitter who were incensed to see Obama’s careless disrespect for America’s treasures. And though I agree with their righteous indignation, is it possible they missed the intended point Obama sought to make?

Yes. It’s also possible — okay, damn near certain — that you’re a moron. This is the picture she refers to: 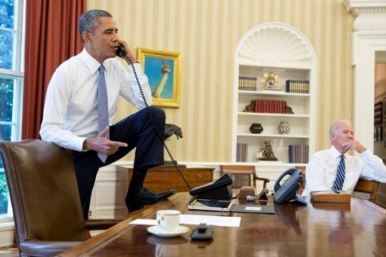 But even The Blaze points out that this is nothing new. Was George W. Bush sending secret messages to Muslims when he put his feet up on the desk multiple times? Or Gerald Ford? Or does your Magic Muslim Message Decoder Ring only work on Obama? Idiots. Absolute idiots.

September 7, 2013 Barton: Only Christians Can Be Good Scientists
Recent Comments
15 Comments | Leave a Comment
Browse Our Archives
get the latest from
Nonreligious
Sign up for our newsletter
POPULAR AT PATHEOS Nonreligious
1