As predicted by everyone other than Larry Klayman and his fellow delusional paranoiacs, his “second American revolution” that was supposed to draw millions of people to the White House to demand President Obama’s resignation turned out to be a small gathering of cranks and neo-confederate posers. Right Wing Watch snapped this photo of the literally tens of people who showed up: 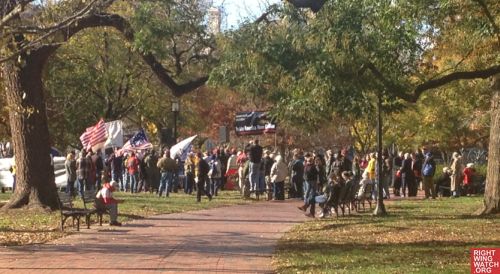 Apparently, President Obama did not get frogmarched out of the White House and forced to resign from office, much to the surprise of absolutely no one other than this gaggle of halfwits. Time puts the number of attendees at “less than 100.”

“We have been disserved by the so-called leaders of our country for generations,” said Larry Klayman, the chairman of Freedom Watch and leader of the Reclaim America Now Coalition. ““We are giving [Obama] one last chance to obey the will of the American people.”

Yeah, we’re giving you one last chance, Obama! And if you don’t come out with your hands up, we’re gonna…spout a bunch more stupid shit and get a few dozen more people to scream slogans at you! Don’t make us angry; you wouldn’t like us when we’re angry!

Klayman said that if President Obama does not adhere to their demands by Black Friday, Nov. 29, the day that traditionally marks the beginning of the Christmas shopping season, the protestors would have no choice but to attempt to force him out of office.

Oh, please do. That will be fun to watch. The Worldnetdaily has a report on it and they claim there were “200 hardy patriots” in attendance. You can watch the video of Joseph Farah’s talk at the protest, which he totally phoned in.