The Racist Nature of Marijuana Arrests

Surveys have long shown that black and white people use, buy and sell marijuana at pretty much identical levels, but the numbers of arrests, convictions and incarceration has long been wildly disparate. Adam Serwer published this chart that demonstrates this for the last few years: 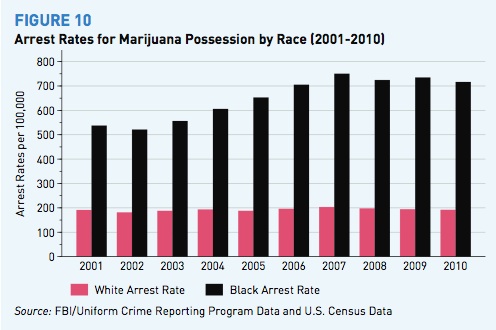 The result of this is that wealthy drug users get off with almost nothing while poor minorities are herded into a permanent underclass:

According to the report, there were more than 8 million marijuana-related arrests between 2001 and 2010, almost 90% of which were for possession. Marijuana arrests now make up more than half of all drug arrests in the country. And use of the drug has only increased over time.

As Michelle Alexander notes in her book, The New Jim Crow, the consequences of being convicted of felony marijuana possession can be far more dire than the sentence itself. Former offenders can find themselves deprived of professional or driver’s licenses, educational aid, food stamps, public housing, their right to vote, and they may find themselves fired and unable to find new employment, having been marked by society as little more than a criminal. For blacks caught up in the system it can compound the already considerable effects of ongoing racial discrimination.

Yet with their own acknowledged marijuana use our current and former presidents, as well as our well-respected newspaper columnists, are implicitly acknowledging that mere marijuana use does not make you a criminal who should be driven from society and made a pariah, it does not consign you to fate as an addlepated dunce or violent sociopath incapable of holding a job or raising a family. Would that the worst consequence for marijuana use was something resembling Brooks’ recollection of a botched attempt to deliver a presentation in English class while stoned. Legalization means that other people, not just elites and their children, can have the opportunity to shrug off past drug use as a youthful dalliance rather than a life sentence.

President Obama used to smoke pot. Neither he nor the country would be better off if he had been arrested and jailed.

January 9, 2014 Garrow, Santilli Call For Military Coup
Recent Comments
9 Comments | Leave a Comment
"OnlySky is now live: https://onlysky.media/I am adding Ed to my OnlySky authors shortcuts folder so ..."
Thomas Fitzpatrick Saying Goodbye for the Last Time
"Hi ,for anyone wanting to follow the friendly atheist on Onlysky, it will go live ..."
david coxill Saying Goodbye for the Last Time
"Oh yes.. The privilege of being called names by people who have zero understanding what ..."
Standingbear Gallups: Satan Has Convinced Christians They ..."
"I wouldn't mind idiots saying "Black Lives Matter" IF They Meant it.Clearly that is not ..."
Standingbear Gallups: Satan Has Convinced Christians They ..."
Browse Our Archives
get the latest from
Nonreligious
Sign up for our newsletter
POPULAR AT PATHEOS Nonreligious
1