This Has Been a Weird College Basketball Season

This Has Been a Weird College Basketball Season February 11, 2014 Ed Brayton

Back in November I did my annual preview of the college basketball season and I was wrong about almost everything. This has been one of the weirdest seasons I’ve ever seen and I had a lot of teams both overestimated and underestimated.

Here was the preseason top 5: 1. Kentucky. 2. Michigan State. 3. Louisville. 4. Duke. 5. Kansas. And here’s the current top 5: 1. Syracuse. 2. Arizona. 3. Florida. 4. Wichita State. 5. San Diego State. Not a single team in common. Of the preseason top 5, Michigan State is the highest ranked at #9. Duke is #11, Louisville is #14 and Kentucky is #18. None of the current top 5 is a surprise to be there other than San Diego State (and I think they’re being overrated), of course. Syracuse, Arizona and Florida are elite programs that returned a ton of talent and Wichita State was in the Final Four last year.

I’m also not surprised that Louisville and Kentucky are underachieving. Kentucky is incredibly young, often starting five freshman, and Louisville without Chene Behanan just isn’t as good a team. Both teams are very good and could make a run, but they’re ranked about where they should be now. Duke and Kansas have both been inconsistent but they seem to have really hit their stride now and both are still Final Four contenders. Kansas is considerably better than I thought they’d be. Andrew Wiggins is really good but Joel Embiid is an absolute beast in the middle and he’s probably going to be the #1 overall pick in the draft.

Duke is a hard team to figure. Their weakness is in the middle and they were really manhandled by bigger teams like Kansas and Arizona early on, but over the last 7 or 8 games they’ve really stepped it up. Coach K started coaching like a hockey coach, replacing his entire lineup every few minutes. That allowed the guys on the floor to play with absolute intensity on both ends of the floor for a few minutes at a time and their defense and rebounding improved dramatically. Jabari Parker had an incredible start to the season, went into a slump for a few games, but is now back to dominating. Against Boston College a couple nights ago he had 29 points, 16 rebounds and 3 blocks. He’s leading the ACC in rebounding and is second in scoring. But I still think they have a real problem with bigger teams in the tournament.

The Big Ten has been absolutely bizarre. MSU is on top right now and that was predictable, but what the hell happened to Ohio State and Wisconsin? Both teams started the year very strongly and shot up into the top 5, then went on big losing streaks and are pretty much out of the conference race. Wisconsin lost three games in a row at home, which has never happened under Bo Ryan. And it’s a Badger team that can score in bunches but can’t defend. It’s like we’ve stepped into an alternative bizarro universe of Big Ten basketball.

And Michigan has been way better than I thought they’d be, especially after losing Mitch McGary. They could easily have packed it in when he went out for the season after back surgery, but they didn’t. Nik Stauskas has been amazing all year long and Derek Walton continues to improve as a point guard. But someone needs to put on an APB on Glenn Robinson III, who seems to disappear all too often for a player with his talent.

Weird year, but a lot of fun. Can’t wait to see where it goes from here.

February 11, 2014 Brown, Huckabee Let Newsmax Push Scam to Followers
Recent Comments
10 Comments | Leave a Comment
"I didn't even think there were free video editing resources, for full-fledged editing, besides actually ..."
James Willey Hey Look, Another ‘Family Values’ Adulterer
"JALY5vN.org"
aditi New Fox Anchor a Q Anon ..."
"Your argument is "Things exist, therefore God," and you just simply believe that there has ..."
Alex Zer0 And Yet Another Stupid Atheist Meme
"Oh hell. Just now got back here. Requiescat in pace, Ed, or just feed the ..."
(((Hornèd Pontilibratificus))) Saying Goodbye for the Last Time
Browse Our Archives
get the latest from
Nonreligious
Sign up for our newsletter
POPULAR AT PATHEOS Nonreligious
1 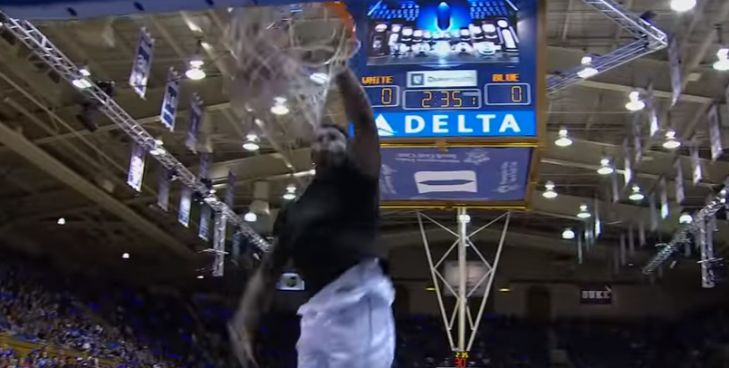 Nonreligious
Anyone Up for Some Fantasy Football?
Dispatches From the Culture Wars