Yet another atheist sign has been vandalized, but this time it isn’t even a billboard or a sign advocating atheism at all, it’s a road sign that only says that a particular section of the highway is being cleaned up by the Omaha Atheists. Here’s a picture of what was done: 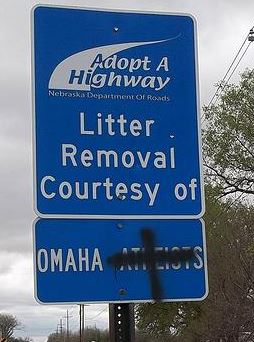 And a report on what happened:

On Thursday, May 1st, I drove out to the Nebraska Department of Roads office to get the warning signs we’ll place to let traffic know that people are working on the highway. Since I was in the area anyway, I drove a bit further to visit “our” highway and scout places for parking, etc. I could tell from quite a distance that something was on the sign, but at first thought it could be a plastic bag, blown there by the wind, or just mud because of all the recent rain. I was very wrong. I pulled onto the shoulder and took photos of the sign to share with the board so that we could decide what action to take. I’m sure most of you have seen that photo by now, but I’m attaching it because everyone deserves to know what happened. There was no light in that act of vandalism, only darkness. Holding any one person accountable for the damage isn’t possible, since it’s not likely there were witnesses beyond the guilty party and there are barely lights out there, much less cameras. The Nebraska office has been notified and will replace the sign, at taxpayer expense, of course. Still, it should not be allowed to pass with a shrug of the shoulders and “Can’t do anything, so why try?”

I’m averse to any form of unpleasant confrontation and will go to great lengths to avoid it, in case anyone had never noticed. Really though – hey, have we met? That aversion disappears, however, when the target of the confrontation is someone, anyone, I care about and I care very much about this group. I made the board aware of the issue so that we could discuss how best to deal with the situation and draw something positive from it. We want to take an ugly act of ignorance and reverse it into a tool for education. You will be reading much more from the rest of the board regarding our plans for making this happen, and we will be asking for your support.

Now, this part is important: I would like our secular community, as well as the public, made aware of what happened because, while this is a small incident, it is also endemic of the disrespect we experience daily and small incidents tend to escalate. There are some in our community, having seen the photo, have mentioned retaliation and other excessive reactions. I completely understand those feelings, but that sort of revenge does us no favors and will only contribute to the stereotypes about us. I want to stay on the high road because the view is always better up there. Please travel there with me.

I want to ask questions. What was the motivation behind this? Who might have been so insecure in his or her faith that the mere existence of the word “Atheists” in public is a threat? Was someone so low on actual thought processes that they decided that a spray-painted cross would chase us away, like some talisman hung in a medieval forest to frighten the peasants? In my opinion, it was in all likelihood just another thoughtless expression of privilege and quite possibly a bored teenager. You know the type – Nebraska is a Christian state and you aren’t welcome here!

I think that’s quite likely. This is Christian privilege rearing its ugly head yet again and an attempt to tell atheists that they aren’t welcome even if they’re doing something good and useful. It’s bigotry.

May 7, 2014 FL Judge Told Not to Give Bibles to Defendants
Recent Comments
28 Comments | Leave a Comment
Browse Our Archives
get the latest from
Nonreligious
Sign up for our newsletter
POPULAR AT PATHEOS Nonreligious
1

Nonreligious
Why We Don't Believe
Dispatches From the Culture Wars

Nonreligious
Yes, Some People Should Be Shunned
Dispatches From the Culture Wars
TRENDING AT PATHEOS Nonreligious