I wrote a couple weeks ago about the couple in Kansas who filed a motion to intervene as a defendant in the suit challenging that state’s ban on same-sex marriage because letting gay people get married would destroy their marriage. Now here’s an even better one in South Carolina. This court filing is so stupid that it’s hard to believe it wasn’t written by Larry Klayman. It begins:

DON BOYD, MUSICIAN AND PSALMIST, Anointed and Assigned as a Watchmen of the souls of the people errantly calling themselves lesbian and gay WOULD PURSUE DISMISSAL of what is in essence and in truth a RELIGIOUS matter couched of late as a secular deprivation of constitutional rights by the Gay Agenda (of said people errantly identifying and calling themselves lesbian and gay) apostate and rebellious from The Most High GOD and Creator LORD of all the Earth, covetous of the Portion of those marrying and given in marriage in this world, troubled and incited of that Wicked One Lucifer the Devil unto discontent with Divine Constraint their Portion and glorious Calling in this life unto Reward of the Next. [snip] Any ratifying of gay “marriage” would compel me to leave off worshipping THE LORD with music and psalms – free exercise of my religion – to assume the life of a protester and wedding crasher.

And it just gets weirder and weirder: 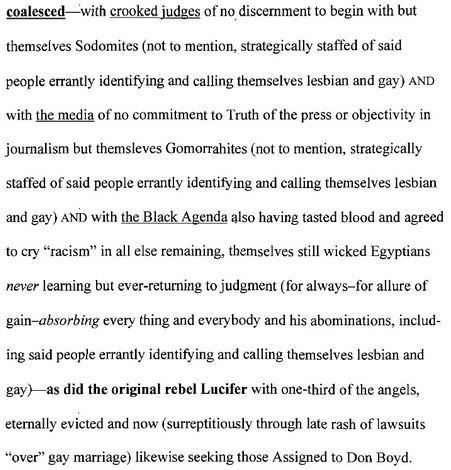 I’m sure it will be given all due consideration before being passed around to much laughter. Here’s the whole thing:

November 6, 2014 FFRF Finds Rampant Violations in Texas School
Recent Comments
28 Comments | Leave a Comment
Browse Our Archives
get the latest from
Nonreligious
Sign up for our newsletter
POPULAR AT PATHEOS Nonreligious
1

Massachusetts Construction Worker Dies From Eating Black Licorice
This all too real story made me thank my fictitious god I...

Peaceful Transfer, Courts, Cheating and Lindsey Graham. Sweet...
Reporter: Will you commit to making sure that is a peaceful transferral...

Trump: Religious Supporters and Racism
By Linda LaScola, Editor As many readers here know from their own...

Benediction
Support Blinky & Sal on Patreon and check out Barb on Webtoon.
view all Nonreligious blogs
What Are Your Thoughts?leave a comment
Copyright 2008-2020, Patheos. All rights reserved.