As you know by now, President Obama has nominated U.S. Attorney Loretta Lynch to replace Eric Holder as attorney general. And you’ll probably get a chuckle out of Warner Todd Houston, a right-wing halfwit who writes for Breitbart, wrongly identified her as a lawyer who represented the Clintons in the Whitewater scandal. He had the wrong Loretta Lynch.

New York federal prosecutor Loretta Lynch, the new nominee for attorney general, has a career filled with high profile cases — and she was a member of Bill Clinton’s defense team during the 1992 Whitewater corruption probe…

Indeed, the prosecutor has a long career built of some high profile cases but there is one case Lynch was involved in that few are talking about. Lynch was a part of Bill Clinton’s Whitewater probe defense team in 1992.

In 1992, the Clintons came under fire for investing in a perennially failing Arkansas real estate company known as Whitewater Development, a venture heavily subsidized by Clinton friend Jim McDougal in an effort to soften the losses the Clintons were experiencing as investors. The probe was widened to look into the failure of the Madison Guaranty Savings and Loan to which it was connected. Eventually the U.S. Securities and Exchange Commission won several convictions handing jail time to the McDougals as well as Arkansas Governor Jim Guy Tucker.

The Clintons escaped any convictions in the probe.

A New York Times article from March of 1992 reported that Lynch was one of the Clintons’ Whitewater defense attorneys as well as a “campaign aide.”

Except that was an entirely different Loretta Lynch. This one was a white lawyer from California, not the black federal prosecutor from New York. In fact, the right Lynch was already a U.S. Attorney in 1992, which would have made it impossible for her to have defended the Clintons in the Whitewater case. Those damn pesky facts. So eager was Houston and Breitbart to get out this vital “news” that they didn’t bother fact-checking it. And I’m sure you’ll be shocked to find out that the Breitbart readers went immediately racist too: 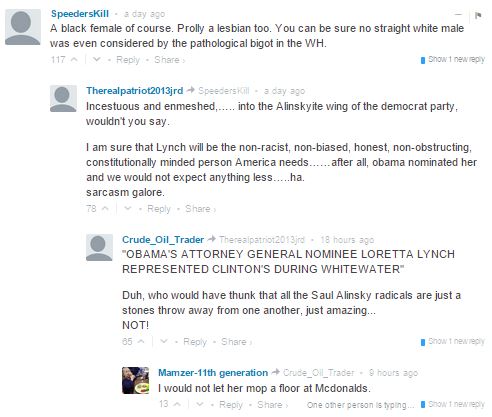 November 11, 2014 Beck Thinks Obama Should Have Been Impeached Over Van Jones
Recent Comments
23 Comments | Leave a Comment
Browse Our Archives
get the latest from
Nonreligious
Sign up for our newsletter
POPULAR AT PATHEOS Nonreligious
1

AAI's Video Channel
Some of you may not be aware that AAI has a...

Duggar Sexual Abuse Allegations From Gossip Vloggers?
ETA: Not true, just as I thought. Allegations from the "Pickles and...
view all Nonreligious blogs
What Are Your Thoughts?leave a comment
Copyright 2008-2020, Patheos. All rights reserved.