After approving millions of dollars in tax breaks for Answers in Genesis’ planned Noah’s Ark theme park, not once but twice, the state of Kentucky has now decided that they are ineligible for those tax breaks because they plan to discriminate in hiring and because the park will proselytize:

A proposed Noah’s ark theme park in Northern Kentucky has been turned down for around $18 million in state tax incentives amid concerns that it will promote religion and violate the separation of church and state.

But the group behind the project — Answers in Genesis — says it is considering legal action in federal court.

The state Tourism, Arts and Heritage Cabinet said in a letter Wednesday that the Ark Encounter theme park has changed it’s position on hiring policies since it originally filed for incentives in 2010 and now intends to discriminate in hiring based on religion.

It also said the park has evolved from a tourist attraction into an extension of the ministry activities undertaken by Answers in Genesis, which promotes a literal interpretation of the Bible’s old testament and argues that the Earth is only 6,000 years old. 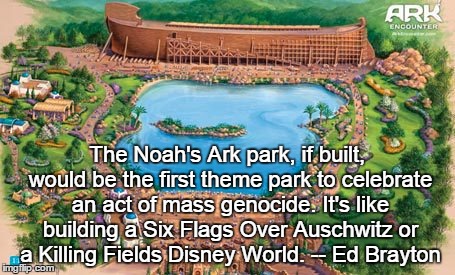 Mano Singham on The Unnecessary Science
Manoi Singham, over at Freethought Blogs, has recently kindly reviewed a book...

What Direction Will the Tanks be Pointing if...
After Trump refused to commit to the peaceful transition of power today,...
view all Nonreligious blogs
What Are Your Thoughts?leave a comment
Copyright 2008-2020, Patheos. All rights reserved.