Torture: Another Issue On Which Catholics Ignore Church Teaching

A recent Washington Post/ABC News poll found that those without religion were the only group in which a majority believes that torture is never justified. White evangelicals, not-evangelical Protestants and Catholics all believe it was justified by over 60%. 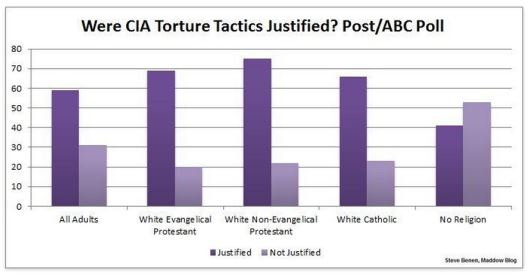 About 65% of American Catholics believe torture to be justified, but the Catholic Church itself takes a very strong stand against torture. Here’s the US Conference of Catholic Bishops resource page on torture, which links to church documents calling torture an “intrinsic evil” and to many letters the bishops have written to government officials protesting the use of torture. Which makes it yet another on which American Catholics disagree strongly with their own church.

In fact, most American Catholics believe very little of what the church teaches on a wide range of subjects: divorce, birth control, transubstantiation and now torture as well. Why do they still consider themselves Catholics, then? Tradition, of course. And because church membership operates as a tribal marker. I’m sure there are other factors as well.

December 26, 2014
Chris Stedman on the Non-Existent War on Christmas
Next Post