I’ve noted before the absolutely bizarre claim by Christian Reconstructionist Michael Peroutka that Martin Luther King was not an advocate of civil rights, particularly of anti-discrimination laws like the Civil Rights Act. Warren Throckmorton is spending this whole week posting information about MLK that disproves that utterly ludicrous claim. He quotes this from Jake MacAuley, who used to be Robin to Bradlee Dean’s Batman and is now with Peroutka’s Institute on the Constitution:

It appears to me that this concept of “civil rights” was a gross distortion of his work. This bastardized version of truth would actually only serve to compound power into the already corrupted task master, the human heart, or more specifically stated the human occupied civil government institutions.

At one time in our history, we looked to God’s Word to determine what was right and wrong. This was a fixed and certain standard.

Having jettisoned this fixed, objective standard, government tramples our God-given rights and now pretends to issue what it calls “civil rights”.

But “civil rights” are make-believe. Real rights come from the Creator.

In Ferguson, Missouri we have witnessed the folly and the futility of make-believe “civil rights”.

And he quotes an essay by a Calvinist theologian that is published on the Institute on the Constitution website, which says that anti-discrimination laws are un-Biblical:

But the moral crux of the problem of discrimination is the discrimination against unalterable characteristics. Is it moral to discriminate against unalterable characteristics regarding which a man is helpless? Here is where the race problem becomes so sensitive. A man with a white skin cannot do anything about it; a man with a black skin cannot do anything about it. Why discriminate against (choose against) a man for that for which he has no remedy, for an unalterable trait that is unattractive to you and maybe others? Here is where cruel injustice appears immorally to intrude itself into the situation. But is it injustice?

If the writer has made an earnest effort to carry a tune and keep time (which he has) but is unable (which happens to be the fact), is an injustice done h i [him] because he is “discriminated” against by a choral society which discriminates against a trait he had which is unalterable for h i [him]? Of course not. Justice does not consist in denying reality or the facts of life; injustice is not identical with recognizing reality (that I cannot sing).

So in order to argue that MLK was on their side, they have to argue that MLK opposed anti-discrimination legislation, a position so inane that no one could possibly entertain it with a straight face. Take this passage from the famous I Have a Dream speech:

And of course, MLK was a huge advocate of the Civil Rights Act, which outlawed racial discrimination in housing, employment and public accommodations. The famous image of LBJ signing that act into law, of course, has MLK standing right behind him: 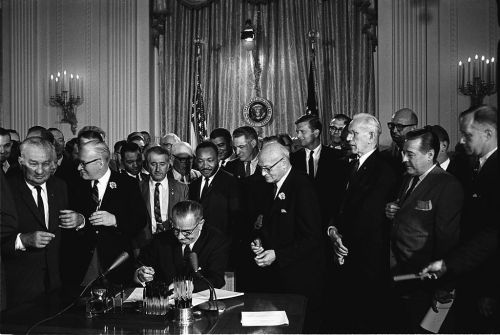 January 7, 2015
Beck: Speaker Gohmert Would Save America
Next Post

January 7, 2015 Most Diverse Congress Ever is Almost Entirely White, Male, Christian
Recent Comments
12 Comments | Leave a Comment
Browse Our Archives
get the latest from
Nonreligious
Sign up for our newsletter
POPULAR AT PATHEOS Nonreligious
1