Another Scam Email From Huckabee

I wrote recently about Mike Huckabee making money by selling his mailing list to a laundry list of con artists and scam companies. Buzzfeed reports on the latest one, a quack cancer cure allegedly found hidden in the Bible. Huckabee himself even recommends the scam in his email, saying it was “important information.” 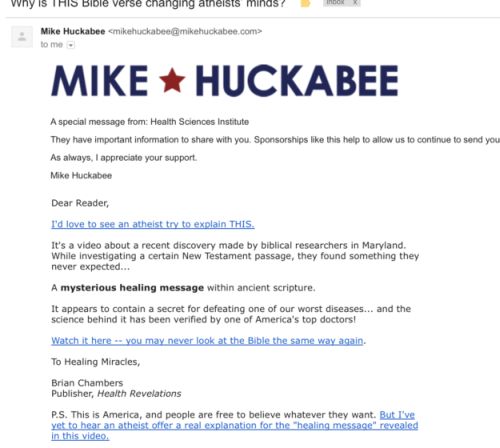 I’ll say this: They know their target audience. It forwards to this site, which has a video about this “revelation” found in the Bible. The site claims that they’re under “intense political pressure” to remove the video, but they pledge to leave it online as soon as possible. That and the email above use all of the well-worn marketing techniques that appeal to all the right wing emotional buttons.

Wingnuts eat this shit up with a spoon. Unnamed people — Obama, of course — are putting “intense pressure” on them to take the video down (as if that could actually happen on the internet). And it’s a secret discovery that’s been hidden, perhaps even suppressed because they don’t want you to know this. And of course, those evil atheists can’t explain this. Sure I can. It’s a scam marketed to an audience that is highly susceptible to scams. And the purpose is to separate them from their money as efficiently as possible.

January 13, 2015
Fischer: Paris Massacre May Have Been God's Punishment
Next Post

January 13, 2015 Catholic Wingnut to Speak at Arizona 'Red Mass'
Recent Comments
14 Comments | Leave a Comment
Browse Our Archives
get the latest from
Nonreligious
Sign up for our newsletter
POPULAR AT PATHEOS Nonreligious
1