The Endless Irony of Bill O’Reilly

Bill O’Reilly is quite upset that people are criticizing the movie American Sniper because it’s “pro-military.” He doesn’t bother to engage any of the actual substantive criticisms of the movie, of course, he just calls those criticizing it “far-left kooks,” using his familiar argumentum ad labelum strategy. Hilariously, he used this graphic: 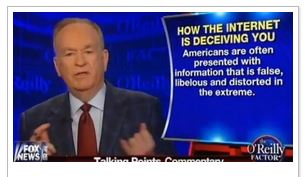 In fact, he seems to have a serious problem with lying, to the point of being pathological, like his claim to have gone to New Orleans after Hurricane Katrina, climbed on top of the Superdome with his sniper rifle and shot dozens of people who were looting. Funny, no one can seem to find any evidence for that ludicrous claim.

January 26, 2015 Michael Savage Diagnoses America
Recent Comments
18 Comments | Leave a Comment
"I am thinking the same thing .It is at times like this I wish there ..."
david coxill Saying Goodbye for the Last Time
"Thanks for being so forthright."
Gary Whittenberger Supreme Court Justice Jay Sekulow?
"Just for the record, and so no one can say that I'm not mature enough ..."
S. Arch Supreme Court Justice Jay Sekulow?
"It’s done, Ed. It’s done. Wish you were here (and realise you’re not going to ..."
Thomas Fitzpatrick Saying Goodbye for the Last Time
Browse Our Archives
get the latest from
Nonreligious
Sign up for our newsletter
POPULAR AT PATHEOS Nonreligious
1

In Defence of BBC News. Sort of.
This piece is not to have some kneejerk defence of the BBC...
view all Nonreligious blogs
What Are Your Thoughts?leave a comment
Copyright 2008-2020, Patheos. All rights reserved.